Scottie Resources Corp. is pleased to report additional new assays on the previously announced northern extension of the Blueberry Zone, including intercepts of 16.5 g/t gold over 10.0 metres and 28.8 g/t gold over 4.94 metres.

Scottie Resources Corp. (“Scottie” or the “Company”) (TSXV: SCOT) is pleased to report additional new assays on the previously announced northern extension of the Blueberry Zone, including intercepts of 16.5 g/t gold over 10.0 metres and 28.8 g/t gold over 4.94 metres. Recent drilling at the Blueberry Zone has extended it to more than 550 metres in strike length, and it remains open along strike and at depth (September 21, 2021). The Blueberry Zone is located on the Granduc Road, 2 km north-northeast of the past-producing high-grade Scottie Gold Mine, 35 kilometres north of the town of Stewart, BC.

“These additional high-grade hits on the northern extension of the Blueberry Zone confirm that the structure has both grade and continuity,” comments President and CEO, Brad Rourke: “We continue to advance this zone by additional drilling holes along strike and down dip from these strong results. So far this season our drilling has been quite successful in increasing the size potential of the zone, adding hundreds of metres to the strike length. In addition to being a high-grade near surface target, the access to the Blueberry Zone is what sets it apart, existing alongside an all-season road is something truly unique in the Golden Triangle.”

Following on successful drill results from 2020 – including intercepts of up to 22.3 g/t gold over 6.10 metres – drill targeting at the Blueberry Zone has focussed on testing the north-south contact between andesitic rocks and siltstones of the Early Jurassic Hazelton Group and their relation to intersecting ENE-trending pyrrhotite-rich veins. Detailed surficial mapping of the contact combined with modelling of the subsurface mineralized structures identified in 2020, has been effective in predicting the orientation and extent of the mineralized zone.

A total 5,000 metres of drilling has been allocated to testing the Blueberry Zone during the 2021 season, which has been drilled in two phases in order to utilize assays from phase 1 to refine targets in phase 2. Drilled hole lengths vary between 40 and 320 metres, testing both near surface targets as well as deeper plunging ore-shoots along the primary north-south structure. 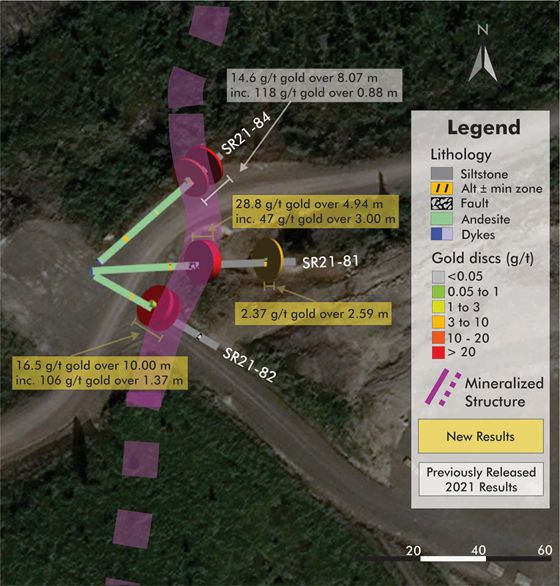 About the Blueberry Zone

The Blueberry Zone is located just 2 km northeast of the 100% owned, past-producing Scottie Gold Mine located in British Columbia, Canada’s Golden Triangle region. Historic trenching and channel sampling of the Blueberry Vein include results of 103.94 g/t gold over 1.43 metres, and 203.75 g/t gold over 1.90 metres. Despite high-grade surficial samples and easy road access, the Blueberry Vein had only limited reported drilling prior to the Company’s exploration work. The target was significantly advanced during Scottie’s 2019 drill program when an interval grading 7.44 g/t gold over 34.78 metres was intersected in a new splay off zone of the main Blueberry Vein. The drill results received in 2020, coupled with surficial mapping and sampling suggest that this splay is in fact a major N-S mineralizing structure, of which the Blueberry Vein was only a secondary structure. This near surface zone is much wider than pursued in previous exploration models and drilling in 2021 aims to expand its strike length. The Blueberry Zone is located on the Granduc Road, 20 km north of the Ascot Resources’ Premier Project, which is in the process of refurbishing their mill in anticipation of production in 2022 (August 10, 2021). 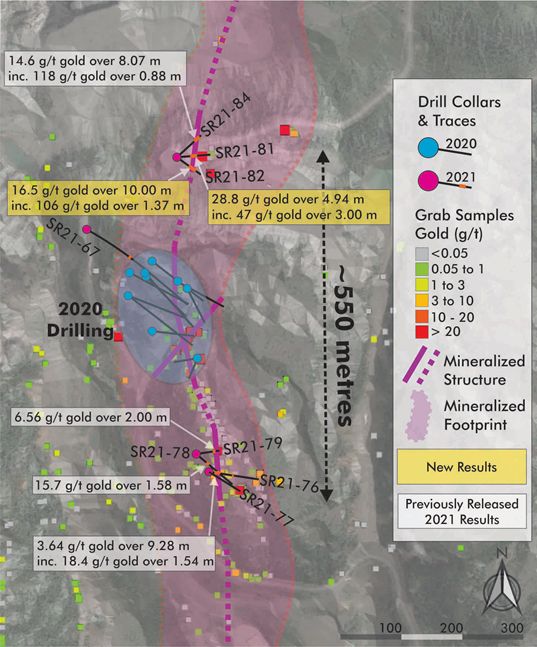 Results from samples during the 2021 field season were analyzed at either ALS Laboratory in Vancouver, BC or at SGS Minerals in Burnaby, BC. The sampling program was undertaken under the direction of Dr. Thomas Mumford. A secure chain of custody is maintained in transporting and storing of all samples. Gold was assayed using a fire assay with atomic absorption spectrometry and gravimetric finish when required (+9 g/t Au). Analysis by four acid digestion with multi-element ICP-AES analysis was conducted on all samples with silver and base metal over-limits being re-analyzed by emission spectrometry.

Thomas Mumford, Ph.D., P.Geo and VP Exploration of Scottie, a qualified person under National Instrument 43-101, has reviewed the technical information contained in this news release on behalf of the Company.

Scottie owns a 100% interest in the high-grade, past-producing Scottie Gold Mine and Bow properties and has the option to purchase a 100% interest in Summit Lake claims which are contiguous with the Scottie Gold Mine property. Scottie also owns 100% interest in the Georgia Project which contains the high-grade past-producing Georgia River Mine, as well as the Cambria Project properties and the Sulu property. Altogether Scottie Resources holds more than 52,000 ha of mineral claims in the Stewart Mining Camp in the Golden Triangle.

All of the Company’s properties are located in the area known as the Golden Triangle of British Columbia which is among the world’s most prolific mineralized districts.