Acquisition Will Add Eight Gold Properties to Expanding Portfolio, Strengthening NW Ontario Gold Strategy Cross River Ventures Corp. is pleased to announce that it has entered into a definitive share purchase agreement dated October 30, 2020, with Northern Dominion Metals Corporation and each of its shareholders pursuant to which it will acquire all of the outstanding share capital of NDMC. NDMC is a privately-held …

Cross River Ventures Corp. (CSE: CRVC) (FSE: C6R) (the “Company”) is pleased to announce that it has entered into a definitive share purchase agreement (the “Purchase Agreement”), dated October 30, 2020, with Northern Dominion Metals Corporation (“NDMC”) and each of its shareholders (collectively, the “Vendors”), pursuant to which it will acquire all of the outstanding share capital of NDMC. NDMC is a privately-held mineral exploration company which holds rights to acquire interests in a series of gold exploration projects located in Northwestern Ontario, Canada.

The projects are situated within the highly gold endowed Archean Superior Province of Ontario and include significant land positions in two key greenstone belts: the Lang Lake and Uchi belts. In total, the eight projects represent over 17,000 hectares of highly prospective gold exploration ground in and among established and productive gold belts.

NDMC is headed by a proven management and technical team with a track record of significant discovery. The projects which NDMC has rights to acquire interests in were specifically targeted for large upside discovery potential. NDMC’s team includes, among others, Dr. Rob Carpenter, Ph.D., PGeo, former CEO of Kaminak Gold Corp where he led the team through acquisition, discovery and maiden resource calculation of the multi-million ounce Coffee Gold Project, Yukon, and Dr. Alan Wainwright, Ph.D., PGeo, an economic geologist with 20+ years’ experience, H.H. Spud Huestis award co-recipient for the Coffee gold discovery (~5Moz Au1), and Fellow of the Society of Economic Geologists. Kaminak was acquired by Goldcorp in 2016 for over $500 million.

All of the rights to acquire interests in the projects were originally acquired from a company controlled by Perry English, vendor of the Dixie Lake project to Great Bear Resources, which became one of the most high-profile gold discoveries in recent years. Other vendors include Gravel Ridge Resources Ltd. (Lang Lake, McVicar), and Bounty Gold Corp. (McVicar).

“This is a significant acquisition for Cross River, one that positions the company for substantial growth,” said Alex Klenman, CEO of Cross River. “The portfolio is extensive, located in the right areas for meaningful discovery, and contains only projects that have met key exploration criteria established by a well-known team of geologists and people with track records of significant discovery. In addition, having an ongoing relationship with key members of the Northern Dominion technical team provides critical exploration continuity. It is certainly advantageous to be able to apply their combined expertise in the ongoing development of the projects. We’re happy they will continue to be involved,” continued Mr. Klenman.

“The Northern Dominion property portfolio represents a unique collection of structurally controlled gold properties that have been largely overlooked and have lacked consistent and focused targeting using modern techniques such as LIDAR or high-resolution geophysics. I am excited to see these claim blocks receive warranted exploration which is expected to generate new drill targets,” said Dr. Rob Carpenter, Ph.D. “The Archean Superior Geologic Province is without a doubt among the best terrain in the world for finding economic gold deposits and this portfolio sits in a highly prospective part of this domain,” continued Dr. Carpenter.

The Company is at arms’-length from NDMC, and each of the Vendors. The acquisition will not constitute a “fundamental change” for the Company under the policies of the Canadian Securities Exchange, nor is it expected to result in a change of control of the Company within the meaning of applicable securities laws. No finders’ fees or commissions are payable in connection with completion of the acquisition. Completion of the acquisition remains subject to the satisfaction of customary closing conditions for a transaction of this nature. 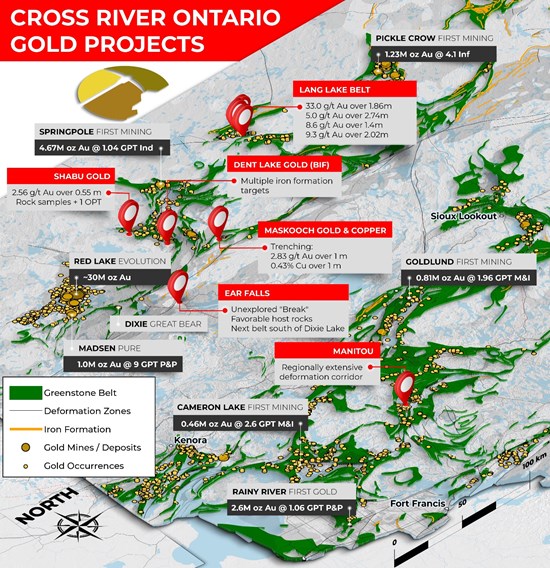 Three separate claim blocks are located in the under explored Lang Lake Greenstone Belt, centered approximately 80km west of Pickle Lake, Ontario. These three blocks include 1) McVicar East, 2) Lang Lake and 3) Cannon Lake. Each host several early-stage gold and base metal targets that have been identified based on the presence of shear zones and structural corridors that cut through favourable rock types.

The Lang Lake belt is part of an extensive Archean greenstone belt system that extends easterly from Red Lake to Pickle Lake. Despite many geological and structural similarities with these regions, Lang Lake appears to have seen far less gold exploration. The Ontario Geological Survey (OGS) had recognized that Lang Lake has largely been overlooked by the industry and completed a mapping and mineral occurrence study in 2014 in hopes of generating renewed exploration activity (OGS Maps 3974/75). These map products helped shed new light on the opportunities in the area and proved very useful to the Cross River technical group when prioritizing these acquisitions. Cross River will continue with archival research over the winter of 2020 and intends to acquire high resolution LIDAR data in 2021 in order to aid with ongoing structural interpretations. Ground truthing of specific targets is expected to begin in the summer of 2021.

The majority of the exploration and drilling history at McVicar East was completed in the early 1990’s however, high-resolution airborne magnetic data was not acquired until 2011 (Geo Data Solutions report for Wildcat Exploration). This data does not appear have been fully utilized for regional structural targeting exercises and re-interpretation of hard copies of this airborne data by Cross River has revealed several potential structural splay zones associated with the Altered and North Flexure Zones, suggesting opportunities for new discoveries along trend and also parallel to these previously known occurrences.

The Lang Lake claim block is located approximately 15km west of the McVicar East claims and was acquired due to proximity to the regionally significant Bear Head Shear Zone (BHSZ). The claim block has seen extensive copper exploration dating from the 1960’s however, the BHSZ appears to have been largely overlooked as a host for gold mineralization despite the presence of favourable rock types such as banded iron formation.

The Cannon Lake target is located approximately 10km east of the McVicar East block has no reported exploration history. The prospect was staked based on mapping data published by the OGS in 2014 which identified significant quartz veining and iron carbonate alteration in previously unknown shear zones. These shears trace along a major first-order greenstone-sediment contact zone. This is a highly favourable environment for gold mineralization in Archean rocks worldwide and represents a newly generated target in the belt.

NDMC has four early stage mineral properties within the Archean Uchi Greenstone Belt, centred approximately 90km east of Red Lake. The claim groups from north to south are: Shabu (gold), Dent-Jackson (gold and base metal); Maskooch (gold and base metal) and Ear Falls (gold). Cross River will continue with desktop compilations of each of these blocks followed by ground truthing of key outcrops in 2021 designed to generate diamond drill targets.

The Shabu Lake claim block covers a narrow wedge of greenstone located along the northwest margin of the Uchi Belt. The Ontario Mineral Database has four mineral occurrences on the claim block with exploration work ranging from the late 1930’s to 1980’s. The most significant occurrence is called Shabu (MDI 52N07SW 0002) and consists of a narrow (10-15cm wide) quartz vein cross cutting weakly altered gabbro and diorite. A total of 6 drill holes were completed and each intersected a pyrite and chalcopyrite bearing (up to 2% copper) zone with hematite and epidote alteration. The best intersection was 1.065 ounce/ton gold over 15cm. Despite the narrow nature of this zone, the high-grade values warrant a detailed evaluation and follow-up. The Cross River technical team intends to undertake a structural desktop study of the claim block to aid with target generation.

The Maskooch claim block occurs along the southeastern margin of the Uchi Belt, approximately 100km east of Red Lake. The claims are underlain by a series of mafic to felsic volcanic rocks with narrow intervals of banded iron formation. Previous exploration has identified extensive alteration suggesting high potential for base metal sulphide mineralization (VMS) as well as lode gold deposits. Two historical mineral occurrences are known on the property: Maskooch (copper) and Wenesaga (gold). The Maskooch copper occurrence has reported trench samples of 0.43% Cu over 1m from sampling completed in 1984 (MDI 52K16NW 00014). Subsequent diamond. drilling of airborne electromagnetic conductors in 2009 yielded weakly anomalous copper and gold from sulphidic iron formation. The Wenesaga Road gold prospect was trenched in the late 1980’s in order to follow up reports of high-grade surface gold, however no assays are available (MDI 52K16NW 00006). A single drill hole is reported in the area from 1990 that yielded weakly anomalous gold values.

The Dent-Jackson claims occur in the west central portion of the Uchi Belt, approximately 25km south of the Shabu claims and 25km north of the Maskooch claims. The property is underlain by similar volcanic stratigraphy as nearby past-producing gold and base metal mines, including the South Bay Cu-Zn-Ag Mine located approximately 6km east of the claim block. Ongoing interpretation of previous work reports by the Cross River technical team is expected to result in a geological framework of the entire area which will be used to evaluate opportunities for further work.

The Ear Falls claim block is located southwest of the Uchi Belt and occurs within an Archean clastic metasedimentary belt approximately 15km west of the community of Ear Falls, Ontario. This region does not have any recorded history of gold exploration; however the Cross River technical team believes this geological setting has been overlooked by previous workers and the company intends to complete a detailed structural study in hopes of focusing and prioritizing ground work for 2021.

The technical content disclosed in this press release was reviewed and approved by Dr. Rob Carpenter, P.Geo., Ph.D., a Qualified Person as defined under National Instrument 43-101. Dr. Carpenter is independent of the Company.

Cross River is a gold exploration company that is focused on the development of top tier exploration properties in premier mining districts. The Company controls a multiple project portfolio in NW Ontario, Canada, with highly prospective ground in and among prolific, gold bearing greenstone belts. The Company also owns an option to acquire a 100% undivided interest in the Tahsis Property, an early-stage gold exploration property located on Vancouver Island, in the Nanaimo Mining Division, British Columbia. Cross River’s common shares trade under the symbol “CRVC” on the CSE.

* Springpole: Based on the technical report titled “Preliminary Economic Assessment Update for the Springpole Gold Project, Ontario, Canada”, dated November 5, 2019, which was prepared for First Mining by SRK Consulting (Canada) Inc. in accordance with NI 43-101.

This news release may contain forward-looking statements. These statements are based on current expectations and assumptions that are subject to risks and uncertainties. Actual results could differ materially because of factors discussed in the management discussion and analysis section of our interim and most recent annual financial statement or other reports and filings with the Canadian Securities Exchange and applicable Canadian securities regulations. We do not assume any obligation to update any forward-looking statements, except as required by applicable laws.

To view the source version of this press release, please visit https://www.newsfilecorp.com/release/67619