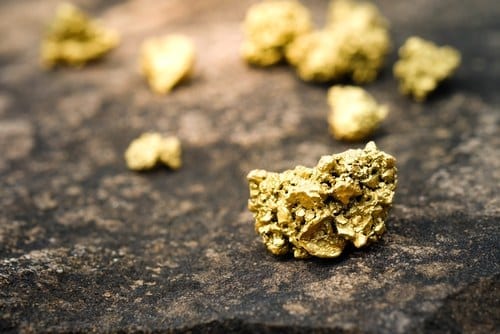 Japan’s Hishikari is a prime example of how a low-sulfidation epithermal gold system can become one of the world’s highest-grade gold mines. The Hishikari mine produced over 7 million ounces of gold between 1985 and 2017 at an average grade of 30 to 40 grams per tonne (g/t). Formed by the geological forces underpinning the mineral-rich Pacific Ring of Fire, Hishikari is one of many such systems found like a string of pearls along the ring, from the tip of Chile up to Alaska and through the islands of Japan.

The name of this deposit type comes from the Greek words for shallow (epi) and heat (therme), a combination that makes perfect sense for these near-surface, hydrothermally created orebodies. Epithermal gold deposits are predominantly high-grade, low-tonnage and near-surface mineral systems. The key process in their formation involves precipitation of quartz and associated precious metals from hydrothermal fluids into open cracks, joints and faults in igneous or sedimentary rock in the Earth’s crust. This hydrothermal fluid often boils, cools and mixes with other groundwaters to create highly mineralized vein systems. Epithermal gold deposits are mostly found in island, volcanic and continental arcs associated with subduction and they represent the root feeder zones to fossil hot springs.

Japan Gold (TSXV:JG) is a gold exploration company with a vast portfolio of 30 gold projects across the island nation of Japan. Japan Gold’s leadership team has long recognized the potential for gold exploration in Japan.Send me an Investor Kit

“Most significant low-sulfidation epithermal deposits are high grade, vein-type deposits, which in some situations can achieve multi-ounce-per-tonne grades,” Dr. Mike Andrews, an experienced exploration geologist and president of Japan Gold (TSXV:JG), told the Investing News Network (INN). “In these situations, a lot of gold can be won from mining and processing of very low tonnages of ore; therefore, production economics per ounce, as well as lower capital costs due relatively smaller development footprints, translates to these deposits having some of the lowest costs per ounce and highest profit margins of all gold mines.”

The majority of the world’s most prolific low-sulfidation epithermal gold deposits are found in the Ring of Fire, a 40,000-kilometer chain of belts, oceanic trenches and volcanic arcs following the edge of the Pacific Ocean basin. Three prime examples of the prolific potential and geographic diversity of this deposit type are the Gosowong mine complex (specifically the Kencana deposit) in Indonesia, the Midas deposit in Nevada and the Hishikari mine in Japan.

Ancient geothermal systems supportive of epithermal gold deposits are widespread throughout Indonesia. One of the world’s largest, highest-grade gold-producing mines is a low-sulfidation epithermal gold system found within the island archipelago nation. Discovered in 1994 along Indonesia’s Gosowong Fault in a region with no previous mining, Newcrest Mining’s (ASX:NCM) Gosowong mine complex has produced more than 6.5 million ounces at between 20 and 40 g/t gold. The complex contains three main deposits, including the prolific Kencana underground mine.

Another hotspot for widespread geothermal systems is surprisingly in the desert landscape of Nevada, a US state that ranks as one of the top destinations for gold production in the world. While Nevada is best known for its sediment-hosted Carlin-type deposits, a large percentage of the state’s gold production also comes from low-sulfidation epithermal gold deposits. It was an epithermal type system that kicked off the Nevada gold rush in the mid-1800s with the discovery of the Comstock Lode. Many of Nevada’s low-sulfidation epithermal gold deposits are found together along the 500-kilometer-long Northern Nevada Rift structural trend, which has produced numerous high-grade deposits, including the famous past-producing Sleeper mine, Kinross Gold’s (TSX:K,NYSE:KGC) Round Mountain and the largest example, Hecla Mining Company’s (NYSE:HL) Midas, which has an initial resource of 7 million ounces at 35 g/t gold.

Another prime example of what this deposit type has to offer is Sumitomo Metal Mining’s (TSE:5713) Hishikari mine in Japan. Discovered in 1981, Hishikari is the country’s only operating gold mine and has produced more than 7 million ounces at grades between 30 and 40 g/t gold.

Hishikari shares many similarities with some of the world’s prolific low-sulfidation epithermal gold deposits, including Gosowong and Midas. “Low-sulfidation epithermal gold deposits worldwide have marked similarities in the styles of quartz vein ore textures and mineralogy and associated wall rock alteration, reflecting their common process of formation,” said John Carlile, executive vice president of Japan Gold. Carlile was the president director for Newcrest Mining’s Indonesian operations when the Gosowong mine was discovered in Indonesia. “The Hishikari mine is one of the largest and highest-grade epithermal vein-type gold deposits discovered globally and is certainly comparable with other major producers such as the Midas deposit in Nevada and the Gosowong goldfield in Indonesia.”

Is there only one Hishikari in Japan?

The regions of the world where low-sulfidation epithermal gold deposits are commonly found, like Indonesia and Nevada, are known to host more than one large, high-grade deposit of this type. However, in Japan, Hishikari stands alone, leaving many to speculate whether another Hishikari could be discovered in this jurisdiction.

Japan hosts more than 110 volcanoes, and numerous geothermal systems are found throughout the archipelago. Not surprisingly, most of Japan’s gold mineralization occurs in near-surface epithermal deposits.

“Major epithermal gold deposits represent the eroded remains of fossil hot spring geothermal systems. Exploration geologists recognize these by the observation of characteristic zonation of clay mineral alteration zones, regional geochemical and geophysical patterns and the identification of specific mineral assemblages,” said Takashi Kuriyama, Japan Gold’s general manager of exploration and former exploration and geology manager at Sumitomo’s Hishikari mine. “These typical signatures are found throughout the Cenozoic volcanic arc terranes of the Japanese islands. The identification of such patterns adjacent to historic mines, which have not been the subject of modern exploration, and the recognition of similar geophysical and geochemical anomalies in favorable structural settings in greenfield areas, support the high probability for the future discovery of high-grade epithermal deposits in Japan.”

Although the island nation remains underexplored for gold by modern methods, Japan is undergoing a gold-mining revival after years of stalled gold exploration activity following a moratorium on gold mining in the country imposed during World War II. For decades, Japan has been mostly closed to foreign mining companies, which were unable to get exploration licenses. In 2012, Japan’s government eased its protectionist stance and amended the country’s mining act, opening up its mineral resource sector to foreign exploration companies in an effort to further develop its domestic mining industry.

Canada-based Japan Gold was the first foreign explorer to be granted prospecting rights as well as drilling permits following the recent mining act amendments. The company is also collaborating with local universities to learn more about Japan’s gold potential. Japan Gold’s project portfolio includes 12 gold projects that collectively host over 40 past-producing gold mines across Japan that were shuttered by the government’s 1943 moratorium. The company’s main focus is its 2019 exploration drill program at its Ikutahara and Ohra-Takamine projects.

The information contained here is for information purposes only and is not to be construed as an offer or solicitation for the sale or purchase of securities. Readers should conduct their own research for all information publicly available concerning the company. Prior to making any investment decision, it is recommended that readers consult directly with Japan Gold and seek advice from a qualified investment advisor.