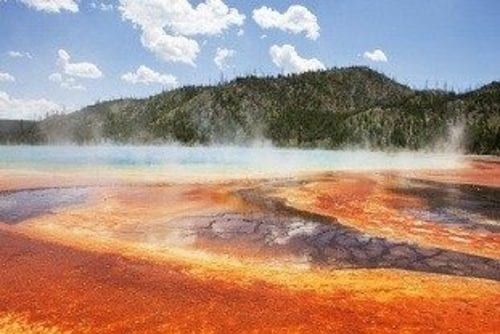 Epithermal gold deposits are often appealing to mining companies because they are typically high-grade, small-size deposits.

Epithermal deposits are a type of lode deposit. They contain economic concentrations from a precious metal such as gold and silver, and in some cases base metals such as copper, lead, iron ore and zinc.

As mentioned, epithermal gold deposits are often found in an area near the Earth’s surface. In fact, mineralization generally occurs at a maximum depth of 1.5 kilometers, and rarely runs deeper than 600 meters, making these different than orogenic gold deposits and perfect for mining companies that want to get metal out of the ground easily.

Due to their shallow depth, epithermal gold deposits form under a moderate crustal temperature of less than 300 degrees Celsius and under medium pressure. These mineral deposits commonly occur in island, volcanic and continental arcs associated with subduction. However, they can also be found in shallow marine environments and in association with hot springs.

But how exactly do epithermal gold deposits form? Ground water is key to the process — when it comes into contact with hot molten rocks deep underground, the silicate minerals in the rocks are dissolved, as are metals within the sedimentary rocks, including gold, silver, lead and zinc. This ground water is also known as hydrothermal fluid, and as it moves it enters open spaces, such as cracks, joints and faults in the rock. Eventually the hydrothermal fluid cools, creating veins, and the resulting material contains the dissolved metals.

Today most epithermal gold deposits are brought to the surface using open-cut pit technologies, though in the past underground techniques were used. As already noted, veins in these deposits tend not to extend far underground, but are often high grade. The Nevada-based Comstock deposit and Cripple Creek Colorado deposit are examples of epithermal bonanzas.

As explained above, gold is often the dominant metal in epithermal deposits, but that is not always the case. Sometimes these deposits hold more silver than gold — indeed, metals ratios vary widely among deposits, and even within a given deposit. Typically, silver-to-gold ratios tend to be higher in low-sulfidation deposits than in high-sulfidation deposits.

All three deposit subtypes form under similar circumstances; however, intermediate- and high-sulfidation deposits form at greater depths. Unsurprisingly, high-sulfide deposits tend to be richer in sulfides, and may contain pyrite and enargite in addition to gold and silver. These higher-sulfide epithermal deposits tend to be linked to porphyry deposits.

Want an overview of investing in gold stocks? Check An Overview of Gold Stocks and Price.

12 responses to “An Overview of Epithermal Gold Deposits”