This Class 1 Nickel & Technologies profile is part of a paid investor education campaign.*

The Alexo-Dundonald project is a past production operation (with historical 2.0 – 4.0 percent nickel head grade) with four high-grade nickel sulfide deposits hosting a total Indicated Mineral Resources of 1.25 million indicated tonnes at 1.0 percent and 1.01 million inferred tonnes at 1.1 percent nickel. The project is located approximately 45 kilometers from Timmins, Ontario, a world-class mining jurisdiction with processing plants available in the area. 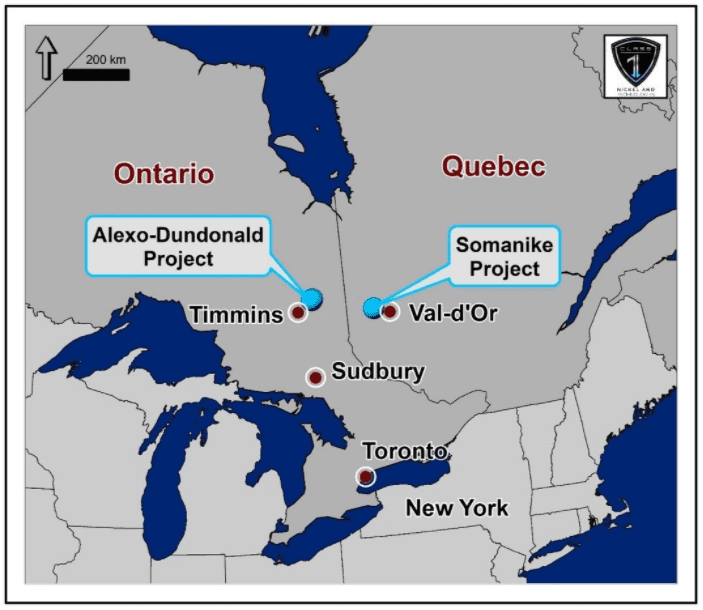 The majority of drilling and mining in the past 30 years has been shallow work (less than 100 meters vertical depth below surface). The great bulk of the 20 square kilometer property surrounding the Alexo mine area remains untested by drilling and geophysics.

Class 1 Nickel is focused on bringing the Alexo-Dundonald project back into production while continuing to drill at Dundonald in order to improve its understanding of mineralization in the area.

Decades of successful capital expenditure and investment into the project by previous owners has resulted in the discovery and delineation of four main nickel mineral resources that occur along the folded komatiite unit.

A total of 102,883 meters of drilling has been conducted on and around the komatiite fold and a valuable data set has been assembled that confirms the existence of numerous other smaller high-grade deposits and mineralized lenses that occur between and alongside the four main updated mineral resources.

“The Alexo-Dundonald project was previously mined via a direct shipping model, and the Preliminary Economic Assessment that P&E will soon commence is being designed around similar principles.” – Eugene Puritch, P.Eng, FEC, CET, President of P&E

First Nickel Inc. first conducted exploration work at Dundonald in 2004, conducting the diamond drilling of 178 holes totaling 30,452.5 meters in addition to borehole geophysics, geological mapping, ground geophysical surveys, minor surface mechanical stripping and environmental work. The drilling outlined eight east-west nickel-bearing sulfide zones in the Dundonald South area, defined at shallow levels (above 200 meters depth). Most of the the lenses are open at depth and along strike. Historical Mineral Resources of 750,000 tonnes at 1.5 percent nickel sulfide reported by Falconbridge have been estimated in the past, with future plans to confirm and extend the zones to a NI 43-101 compliant Mineral Resource Estimate. Fresh, high grade Ni-Cu-PGE sulfide mineralization has been trenched at surface by Hucamp Mines. A selected Hucamp Mines sample of the mineralization returned 34.82 percent Ni, 0.30 percent Co, 3.7 g/t Pt, 5.8 g/t Pd, 0.90 g/t Au, 0.44 g/t Os, 0.47 g/t Ir, 0.84 g/t Rh and 2.4 g/t Ru. These grades are historic and have not been verified by an Independent Qualified Person.

Dundonald North is a nickel zone located 2.2 kilometers away from the Alexo deposit. The zone has been traced along strike for 800 meters and to a depth of 700 meters below surface with the best zone of mineralization found in the center of the channel returning historical grades up to 3.04 percent nickel.

The previous operator of Alexo began mining and stockpiling nickel bearing massive sulfides form its Alexo South mine and the ore was custom milled at Glencore’s Strathcona mill near Sudbury.

The Sudbury Smelter currently smelts nickel-copper concentrate and processes custom-feed materials in the form of concentrates and secondary products.

Other smaller operators in the Timmins area are completely equipped concentrators who operate mills on a toll milling basis.

CEO & joint major shareholder of the Fitch Group, a property development and investment company in Australia. Extensive experience in strategic planning, commercial negotiations, business operations, and asset management. A major shareholder in QEM Limited, a company with one of the largest vanadium resources in the world. Investor in Central Laboratories Ltd, a producer of items for the firefighting and dust suppressants markets. Director of DBRB Property Group a company that manages a diverse portfolio of other investments.

Internationally recognized in the global search for nickel, copper, cobalt and PGEs, Tony began his career with the Falconbridge Exploration team in Sudbury, ON, prior to joining CSA Global (an ERM Group Company) was the Global Commodity Leader for Nickel and Platinum with Anglo-American Exploration, responsible for the technical oversight of all Anglo-American nickel exploration activity globally.

Mr. King is well known and respected in the Mineral Resource industry with particular expertise in Nickel exploration. From 1976 to 1990 he worked as a geophysicist in exploration and resource development in Canada and Australasia. From 1990 to 2012 he was employed by Inco /Vale as a senior geophysicist and then as Manager of Geophysics with responsibility for global exploration. As Chief Geophysicist for Vale Global Exploration Alan worked on geophysical applications for base metals, iron, manganese, coal and fertilizers (potash and phosphate) as well as target generation using regional and global data sets.

Mr. Puritch is a professional mining engineer licenced in five Canadian Provinces with 40 years experience in engineering and operations of open-pit and underground mines. Gold, silver, base metal, PGM, and iron deposits have been the focus with projects ranging from small underground narrow vein to large open-pit multi-element properties. Mr. Puritch is a specialist in geological modeling and mine design and has extensive experience in the use of Gemcom, Whittle, and AutoCad software packages. He has co-authored more than 300 NI 43-101 technical reports as a Qualified Person on gold, silver, base metal and PGM deposits.

Dr. William (Bill) Stone is an economic geologist with over 30 years of experience in the mining and exploration industry in North America and overseas. Bill has worked in senior geological and executive management roles for WMC Resources Ltd, LAC Minerals and North American Palladium and Magma Metals, Geoinformatics, International Metals Group and Anglo American with precious and base metal projects across Canada and in Alaska, Australia, Mexico, Europe and Africa. Dr. Stone specializes in 2D/3D modelling and interpretation of nickel-copper-cobalt (PGM) sulfide, platinum-group metal, gold and zinc-lead-copper VMS mineral deposits, in a wide variety geological settings and mining operations.

His ownership interest is spread across the Hospitality, Advanced Manufacturing, Automotive, Property and Development Sectors. His background as a Financial Accountant for both Bentleys & KPMG provided a strong platform to undertake his previous role of Chief Financial Officer and Joint Managing Shareholder of the Fitch Group – a group of companies with assets in excess of $250 million spread across the commercial and residential property, manufacturing, retail, hotel and childcare industries in Australia.

Director with 25+ years’ management experience within mining and technology sectors for government, public and private sectors. A deep connection to high technology and implementation. An In-demand executive management level turnkey consultant, specializing in operational efficiency and economic optimization to customers including Microsoft, Macquarie, HP, as well as State and Federal government agencies in Australia and Singapore.

Partner of the law firm Colby Monet LLP, in Montreal, Quebec. Mr. Crevier is a member of the Barreau du Quebec and has practiced as a lawyer since 1975, primarily in the area of commercial law, assisting public and private companies in the natural resource and technology sectors. Mr. Crevier has acted as a director for Goldstar Minerals Inc., a TSX Venture-listed issuer, since September 2016.

The information contained here is for information purposes only and is not to be construed as an offer or solicitation for the sale or purchase of securities. Readers should conduct their own research for all information publicly available concerning the company. Prior to making any investment decision, it is recommended that readers consult directly with Class 1 Nickel & Technologies and seek advice from a qualified investment advisor.

Best Gold Stocks of 2021 on the TSX
5 Top Weekly TSX Stocks: Fission Uranium Up on Drill Results
5 Top Weekly TSXV Stocks: Decklar Resources Rises Over 80 Percent
Europe’s Bid to Become Climate-Neutral by 2050 and What it Means for the EV Industry
×
Request an Investor Kit: