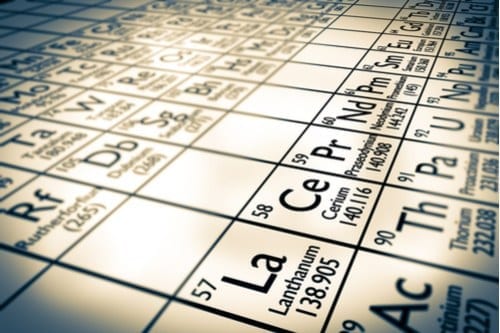 China is the top producer of rare earths and also holds the largest rare earth reserves. Which other countries made the list?

2018 ended on a positive note for the rare earths mining sector, with anticipation of higher demand and concerns about supply combining to create an optimistic outlook.

Rare earth metals neodymium and praseodymium were bright spots as interest in high-tech products like electric vehicles boosted attention from companies and investors in the industry.

Case in point: mines in Brazil produced only 1,000 metric tons (MT) of rare earth elements in 2018, but the nation’s reserves are the second highest in the world. It’s possible that countries like this could become bigger players in the space in the future.

Unsurprisingly, China has the highest reserves of rare earth minerals at 44 million MT. The country was also the world’s leading rare earths producer in 2018 by a long shot, putting out 120,000 MT.

Despite its top position, China remains focused on ensuring that its reserves remain elevated. Back in 2012, the Asian nation declared that its rare earths reserves were declining; it then announced in 2016 that it would raise domestic reserves by establishing both commercial and national stockpiles.

The last decade has also seen the country hone in on illegal rare earths mining, taking steps such as shutting illegal or environmentally non-compliant rare earth mines, and limiting production and exports. China’s stern and effective measures have cleaned up its supply chain significantly, although it continues to improve regulation and supervision.

It’s worth noting that China’s dominance in both rare earth elements production and reserves has caused problems in the past. Prices surged when the country cut exports in 2010, resulting in a rush to secure supply of the minerals elsewhere. While that situation has since been resolved, the current trade war between the US and China has reignited worries about the country’s position.

As mentioned, Brazil was not a major producer of rare earths in 2018, with production clocking in at just 1,000 MT. However, with reserves of 22 million MT the country ties with Vietnam for second place globally. An $8.4 billion rare earths deposit was discovered in 2012 in Brazil, although not much has come out of the discovery. With that said, it’s easy to see why the country’s reserves are so high.

Like Brazil, Vietnam’s rare earth mineral reserves are large and stand at 22 million MT. The country reportedly hosts several rare earth materials deposits with concentrations against its northwestern border with China and along its eastern coastline. The majority of rare earths in the country can be found in primary ore deposits with a smaller amount located in coastal placer deposits.

Vietnam’s rare earths production was small in 2018 at 400 MT, but that’s double its 2017 extraction of 200 MT. Vietnam is interested building its clean energy capacity, and is said to be looking to produce more rare earths for that reason.

Russia produced 2,600 MT of rare earths in 2018, more than Brazil and Vietnam, but its reserves are lower at 12 million MT. The US Geological Survey notes that Russia’s reserves were revised down in its latest rare earths report based on government data; previously they stood higher at 18 million MT.

News surfaced in 2018 that development was set to begin for the Tomtor niobium-rare earths deposit in Yakutia, Russia. The rare earth mining project is a joint venture between state-owned Russian entity Rostec and ICT Group, and the deposit’s estimated mineral resources stand at 154 million tonnes of ore at 9.5 percent total rare earth oxides. Because it has radioactive by-products, Russia is said to be looking at co-production of thorium. No further news appears to have been released about Tomtor.

India’s rare earths reserves sit at 6.9 million MT, and the country produced 1,800 MT of rare earths in 2018. However, an October 2016 article in the Economic Times suggests that the country’s rare earths industry has strong potential. The publication states that India has nearly 35 percent of the world’s beach and sand mineral deposits, which are significant sources of rare earths.

Since then there have been other sources pushing for more mining in India, including the report “Mine in India to Make in India,” released at the India Mining Summit 2018. It’s too soon to tell whether these catalysts will get traction in the country.

While Australia was the second largest rare earth mining country in 2018 at 20,000 MT of production, it has only the sixth largest reserves in the world. Currently its reserves stand at 3.4 million MT.

Rare earths have only been mined in Australia since 2007, but extraction is expected to increase moving forward. Lynas (ASX:LYC,OTC Pink:LYSCF) is currently operating the Mount Weld mine and concentration plant in the country; it also operates a rare earths refining and processing plant in Malaysia.

The company is aiming to increase Mount Weld’s production to 10,500 tonnes per year of neodymium-praseodymium products by 2025, up from 5,444 tonnes in the 2018 fiscal year.

The US reported output of 15,000 MT of rare earths in 2018, up from no production the previous year. Rare earths reserves in the country are fairly high, and stand at 1.4 million MT.

Rare earths mining in the US currently happens only at the Mountain Pass mine in California. It was run by Molycorp before it went bankrupt, and then went up for sale — in the end, the mine was bought by MP Mine Operation, which is majority owned by JHL Capital Group and QVT Financial. Mountain Pass went back into production in Q1 2018 after being put on care and maintenance in Q4 2015.

Despite mining some reserves, the US is a major importer of rare earth materials, with demand for compounds and metals worth US$160 million in 2018; that’s up from US$137 million the previous year. The country has classified rare earths as critical minerals, a distinction that has come to the fore in light of the trade war between the US and China.

The countries listed above are of course not the only ones that hold large reserves of rare earths. The US Geological Survey also lists Malaysia at 30,000 MT, and reserves for the organization’s “other countries” category stand at 4.4 million MT.

In total, global rare earths reserves amount to 120 million MT. With demand for rare earth minerals ramping up as hype about electric vehicles and other high-tech products continues in the mining sector, it will be interesting to see how the above countries contribute to supply in the future.