NV Gold Corporation (TSXV:NVX, US:NVGLF) (“NV Gold” or the “Company”) is pleased to announce the completion of mapping, sampling and two geophysical surveys at its Slumber Gold Project (“Slumber”) and provides the following geological observations and next steps

NV Gold Corporation (TSXV:NVX, US:NVGLF) (“NV Gold” or the “Company”) is pleased to announce the completion of mapping, sampling and two geophysical surveys at its Slumber Gold Project (“Slumber”) and provides the following geological observations and next steps:

“The Company is excited to have identified a previously unknown structural target through our recent geophysical program at Slumber and we are now accelerating the permitting for an immediate drill program in August,” commented Peter A. Ball, NV Gold’s President. “We will now have back-to-back priority drill programs planned for the summer, as we finalize permitting for the upcoming secondary drill program at the Frazier Dome Gold Project.”

NV Gold recently completed geological mapping, sampling and two geophysical surveys over the Slumber project area. The limited area of rock outcrop exhibits multi-phase hydrothermal silicification, and historical rock geochemical sampling and shallow exploration drilling returned samples with elevated concentrations of gold, silver and associated pathfinder elements. Most of the project area, however, is covered by unconsolidated gravel up to 100 meters thick. Drill target selection will largely be based upon geophysical information.

NV Gold completed two detailed ground geophysical surveys over the Slumber project area. A gravity survey, with 200-meter station spacing, and a ground magnetic survey, with 25-meter line spacing, were completed by Magee Geophysical Services of Reno, Nevada. The geophysical surveys cover an area of about 4 square kilometers. The data from both surveys were processed by Thomas V. Weis and Associates of Centennial, Colorado.

The gravity and ground magnetic surveys paint complementary images of the structure and nature of bedrock geology hidden at depth beneath the Slumber project area. The gravity interpretation indicates the presence of a broad NNE-trending bedrock trough, crossed by two deeper NE-trending fault-bounded basins. The magnetic data outline a distinct area of greatly reduced magnetic susceptibility (Figure 1A), which is interpreted to indicate a zone of hydrothermal alteration. The magnetic low measures about 2000 meters long by 300 meters wide, elongate in a NNE direction and coincident with the gravity low. 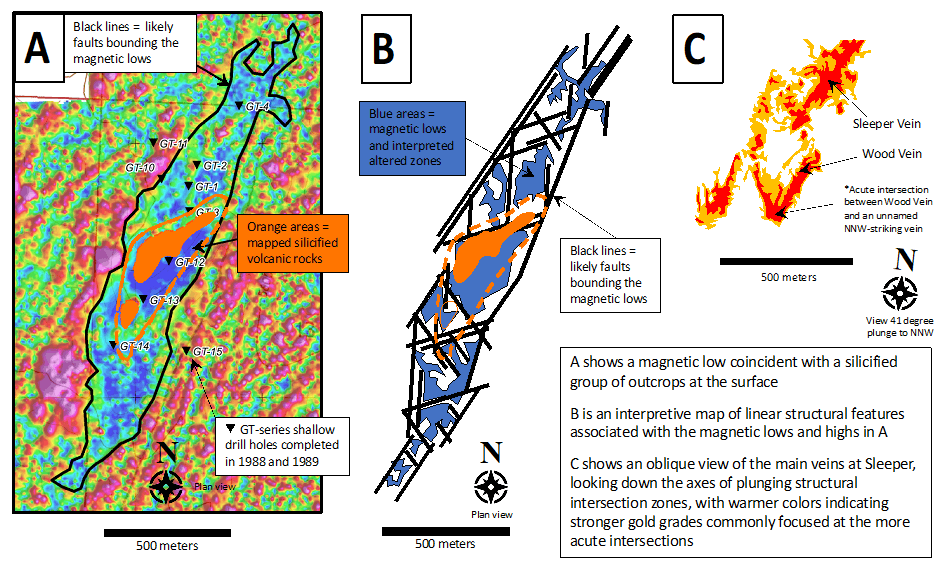 Widespread hydrothermal alteration (multi-phase silicification in outcrop and hydrothermal breccia seen in float) containing significant thicknesses of elevated gold mineralization in historic drilling demonstrate that the system is robust and gold-bearing, with features similar to those associated with bonanza style epithermal veins at the nearby Sleeper and Sandman-Blue Mountain area deposits. Sleeper, located 35 kilometers to the east, produced 2.3 million ounces of silver and 1.68 million ounces of gold from 1986 to 1996).

In the case of Slumber, the Company’s recent magnetic and gravity geophysical surveys have identified at least one clearly developed and altered, lens-shaped zone at the center of our target zone (Fig. 1). Our knowledge of this type of structural setting will assist in identifying the best areas for potential localization of high-grade gold and/or silver mineralization, and with calculating drill targets. The Company interprets the magnetic-low as an altered and mineralized lens, with magnetite-destructive alteration as the source for the anomaly.

Detailed features in the magnetic data indicate the presence of a set of NNE-striking basin-bounding normal faults. The geophysical surveys highlight hidden structural discontinuities, possible conduits for hydrothermal fluids, and a significant area of interpreted hydrothermal alteration, which will be the Company’s target for an upcoming drill program in August 2019.

Slumber is one of several epithermal gold systems on a trend from the Jackson Mountains, through the Bilk Creek Mountains and continuing north into Oregon. These deposits, along with the Sleeper, Sulphur-Hycroft, Goldbanks, Blue Mountain, Sandman, and other precious metals deposits located along the western splays and associated fault-fracture zones of the mid-Miocene (Tertiary) Northern Nevada Rift, define an important epithermal province in northwestern Nevada. These vein deposits are localized along fractures formed during brittle deformation of shallow crust, commonly at intersection zones of synchronous, but non-parallel fractures.

Quinton Hennigh (Ph.D., P.Geo.) is a Qualified Person pursuant to National Instrument 43-101 and has reviewed and approved the technical information contained in this news release. Dr. Hennigh is a director of NV Gold and is not independent and is also the President, Chairman and a Director of Novo Resources Corp.

The Company announces that it has granted incentive stock options to officers, directors and consultants under its Stock Option Plan entitling them to purchase an aggregate of up to 1,075,000 common shares of the Company. The stock options are exercisable on or before July 17, 2024 at a price of $0.20 per share, subject to TSX Venture Exchange acceptance. The option pricing represents an approximate 50% premium to the Company’s current share price.

NV Gold is a junior exploration company based in Vancouver, British Columbia that is focused on delivering value through mineral discoveries. Leveraging its highly experienced in-house technical knowledge, NV Gold’s geological team intends to utilize its geological databases, which contains a vast treasury of field knowledge spanning decades of research and exploration, combined with a portfolio of mineral properties in Nevada, to prioritize key projects for focused exploration programs.

This news release includes certain forward-looking statements or information. All statements other than statements of historical fact included in this release, including, without limitation, statements regarding the interpretation of the area of greatly reduced magnetic susceptibility in the magnetic data as an indication of a potential vein-controlled lens, with magnetite-destructive alteration and/or sulfidation, the possibility that hidden structural discontinuities in the data from the geophysical surveys are conduits for hydrothermal fluids, the completion of a formal Lease Agreement on the Slumber Gold Project, and other future plans and objectives of the Company, including exploration plans, are forward-looking statements that involve various risks and uncertainties. There can be no assurance that such statements will prove to be accurate and actual results and future events could differ materially from those anticipated in such statements. Important factors that could cause actual results to differ materially from the Company’s plans or expectations include regulatory issues, market prices, availability of capital and financing, general economic, market or business conditions, timeliness of government or regulatory approvals and other risks detailed herein and from time to time in the filings made by the Company with securities regulators. The Company disclaims any intention or obligation to update or revise any forward-looking statements whether as a result of new information, future events or otherwise except as otherwise required by applicable securities legislation.