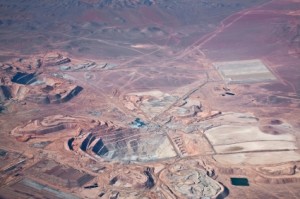 Political and social upheaval play a significant part in the fortunes of copper miners, but producers of the red metal have been particularly wary of strikes across the globe in recent months. How and whether global corporations are able to resolve labor disputes will be closely monitored not just by their shareholders, but by local governments, international non-profit organizations, and human rights activists, especially as resource nationalism intensifies.

Earlier this month, copper giant Freeport-McMoRanCopper&Gold (NYSE:FCX) was able to reach an agreement with workers, who had been on strike for three months, at its Grasberg mine in Indonesia, the world’s second-largest copper mine. Workers protested against low pay and poor working conditions, and only stopped after the Phoenix, Arizona-based company agreed to a 37 percent pay increase over a two year period. In the meantime, however, the company has had to halt production since September, and Freeport’s fourth quarter sales projection have been lowered to 800 million pounds of copper compared to its October estimate of 915 million pounds for the same period as a direct result of the strikes.

In September the strikes also disrupted output at a Peruvian mine that is majority-owned by Freeport-McMoRan as workers of Sociedad Minera Cerro Verde also demanded higher wages. Strikes continued for two months without resolution between the workers and the company, but miners went back to work after receiving guarantees that the regional government of Arequipa would unilaterally come up with agreements for improved pay on their behalf, as the government of President Ollanta Humala declared the strikes legal for the first time in the mine’s 40-year history.

A growing sense of injustice among mine workers as well as frustration among the general population that the wealth of natural resources not being shared equitably is far from unique among Freeport-McMoRan’s workers.

Xstrata (LSE:XTA) and Anglo American (LSE:AAL)  faced the wrath of union workers last month as they protested against possible layoffs at the Collahuasi mine in Chile which ended November 30 when the company laid off 32 employees instead of 62 as initially planned. Both Xstrata and Anglo American have a 44 percent stake in the mine, while Japanese trading house Mitsui (TSE:8031)  holds the remaining shares in the site which produces about 3 percent of the world’s total copper supply.

China too is facing greater scrutiny for its labor practices in overseas mines, with Human Rights Watch going on the offensive over its treatment of workers at Zambia’s copper mines. In early November, the advocacy group released a report stating that the four mines in the African nation operated by state-owned China Nonferrous Metal Mining Group “routinely flout labor laws and regulations.”

Strikes across the globe have had a direct impact on the price of copper, and coupled with the technology to broadcast their grievances to a global audience, mine workers have been able to rally greater global support for their cause. Indeed, Indonesia’s Grasberg union spokesman Juli Parorrongan stated that even as Freeport-McMoRan agreed to the pay increases, “this is the first page of the struggle, and not the end,” suggesting that workers in other sectors across the country as well mine workers worldwide will demand greater equity for their work.

Despite such labor tensions, however, the continued imbalance in supply over demand worldwide should keep producers eager to remain in business despite the growing challenges of meeting workers’ needs as well as government regulations and environmentalists’ demands. Certainly, the 25 percent decline in output at the world’s largest copper mine in Chile’s Escondida mine operated by BHP Billiton (ASX:BHP) as a result of strikes and bad weather is keeping supply tight, as well as a fall in copper stockpile in China, are also expected to keep the price of the red metal high despite the continued sluggishness in the global economy. It is clear nonetheless that moving forward, junior mining companies too will need to be increasingly more vigilant about political risk and labor relations as well as commodity prices in calculating returns on their investments.