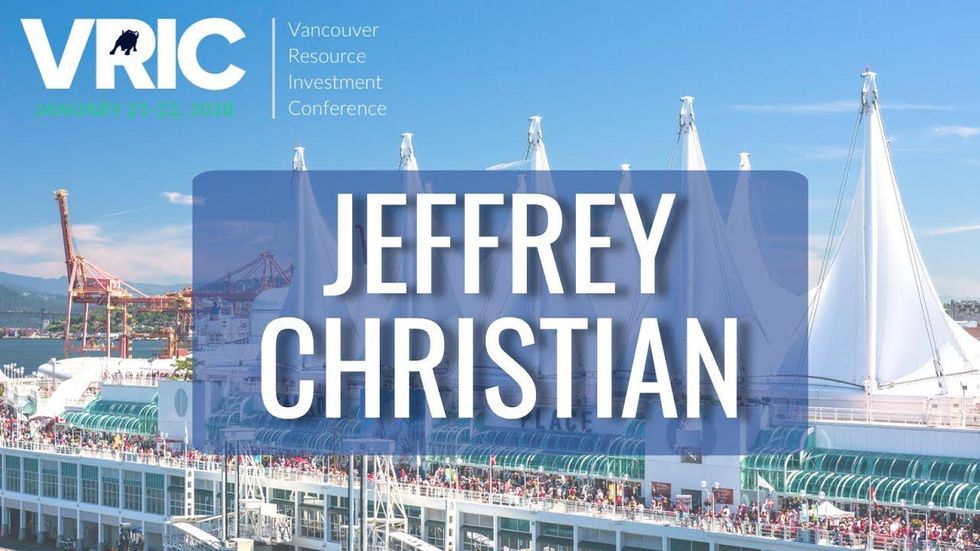 At the Vancouver Resource Investment Conference, the Investing News Network connected with Jeffrey Christian, managing director of CPM Group, to talk about what’s ahead for 2018 and beyond.
Christian expects a modest increase for gold in 2018, with growth relatively flat in the first half of the year. He expects the price to somewhat accelerate in the second half of 2018 and into 2019. Christian is skeptical of the theory that cryptocurrencies are taking investors away from gold, and said what is “distracting” investors from gold is the stock market.
He said investors should expect “relatively decent economic performance this year with gathering long-term storms,” and noted that he wouldn’t be surprised to see a market correction of up to 20 percent in the S&P 500 (INDEXSP:.INX) and the Dow Jones Industrial Average (INDEXDJX:.DJI) over the course of the year. “We think there’ll be a much bigger financial crisis five to seven years from now, and then you could see a much larger decline in US equity values,” he explained.
In terms of lithium, Christian is skeptical of the need for new mines outside of Chile and Argentina, “where the deposits are much richer,” especially if a major electric vehicle market develops and a lot of the lithium used in car batteries gets recycled.
As the world continues to use vehicles with combustion engines, the demand for palladium to coat autocatalysts is expected to remain relatively stable. Christian expects the palladium price rally to continue for awhile, with prices strong in February and March due to high interest in the March NYMEX futures contract. “But at some point that gets resolved. When that happens, the palladium price can come off $100 or 10 percent easily,” he said.
Watch the video above for more insight from Christian on precious and battery metals in the year to come. The transcript for this interview can be found below.