Lots of positive sentiment in the air. Rio Tinto, the world’s second-largest miner, said it saw signs of recovery in China and it expected aluminum AL-FT prices to rise in the second half of 2009. Indonesia’s tin consortium, Bangka Belitung Timah Sejahtera too expects a 20-30 per cent increase in its monthly production of 2,000 tonnes during the Muslim fasting season which starts on Saturday. 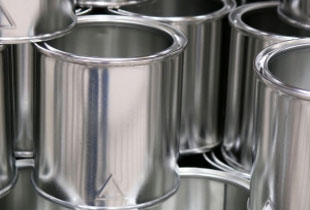 Higher equity markets and an upbeat outlook on metals demand from global miner Rio Tinto Ltd gave a boost to industrial metals on Thursday. At the London Metal Exchange, tin rose more than 5 per cent to touch a high of $14,400 and was last at $14,100 a tonne versus $13,550 a tonne on Wednesday.

An estimated 11.2 per cent fall in Indonesian tin exports in July to 8,778 tonnes, helped support the market, though exports for the first seven months of the year from the world’s second biggest producer of the metal stand at 59,354, a 5 per cent increase on the same period a year ago.

“Commodities and equities have certainly been trading much closer recently,” said analyst Gayle Berry at Barclays Capital. “What we saw interestingly yesterday was buying emerging, especially for copper once prices dipped below $6,000 – maybe there’s not a huge amount of downside from here. I think the market has become much more positive about the outlook for the metals demand in the second half of the year,” Berry said.

Adding to the positive sentiment, Rio Tinto, the world’s second-largest miner, said it saw signs of recovery in China and it expected aluminum AL-FT prices to rise in the second half of 2009. But the miner still remained cautious about the recent rally in metals prices.

“If current markets are any indication, I expect to see more stable and possibly stronger trading conditions in the second half,” chief executive Tom Albanese said.

Meanwhile, Indonesia’s tin consortium, Bangka Belitung Timah Sejahtera expects a 20-30 per cent increase in its monthly production of 2,000 tonnes during the Muslim fasting season which starts on Saturday.

Production usually increases during the fasting season, as workers work longer hours, said BBTS commissioner Ismiryadi. Most of the BBTS workers are contract workers from Java island, and they work the extra hours to finance a trip home during the Hari Raya holiday, he added.

A probe would be followed by one-and-a-half months of review by prosecutors before court hearings, according to procedures outlined in Chinese law, Shanghai-based lawyer Zhai Jian said. Zhai’s firm represent Ge Minqiang and Wang Yong.

Hu, head of Rio’s iron ore business in China, and three Chinese colleagues, were formally arrested this month for allegedly stealing secrets related to the steel industry, a publication run by the prosecutors’ office said August 12. The detention since July 5 and arrest have strained relations between Australia and China.

Rio Tinto on Thursday reported a 65 per cent slump in first-half earnings, hurt by falling commodities prices and the cost of getting out of an asset sale to Chinalco. Rio Tinto said its profit dropped to $2.45 billion from $6.95 billion.

Its underlying earnings of $2.57 billion came in a bit below analyst estimates of $2.67 billion. Slumping prices accounted for $4.67 billion of the declining profit, as average copper and aluminum prices fell 50 per cent while molybdenum prices skidded 74 per cent.

A decline in production, notably in aluminum, took a $294 million dent out of earnings, while it took a $182 million after-tax hit from getting out of a deal to sell assets to Chinalco.

Rio Tinto, which cut 16,000 jobs during the first half, opted to raise $15.2 billion through selling discounted shares rather than stakes in a host of assets to Chinalco following shareholder criticism as well as a rise in the Anglo-Australian firm’s share price.

The company also has announced $3.7 billion of asset sales this year and a separate iron-ore venture with BHP Billiton that the firms believe will save them $10 billion.

“We have held discussions with major Chinese financiers to extend credit to around $5.5 billion to $6 billion to Fortescue,” Chief Executive Officer Andrew Forrest said today in an interview on Bloomberg TV. Fortescue wants to have the financing secured by the end of September, it said on August 17.

Fortescue has been seeking funding as a cash squeeze and lower iron ore prices forced it to put expansions on hold. The Perth-based company may need between $3 billion and $4 billion to proceed with plans to almost double output, Hunan Valin Iron & Steel Group, its second-largest shareholder, said in May.

Fortescue rose 2.3 per cent to A$4.50 at the Australian stock exchange. It has more than doubled this year, compared with an 18 per cent gain in the benchmark index. Forrest wouldn’t be specific on who the company is talking to.

China’s top tin producer, Yunnan Tin, will finish building a 100,000-tonne-a-year lead smelter next year in Yunnan province, a company source said, adding that the firm was also working on a project for a 100,000-tonne copper smelter.

Including Yuguang, large lead producers were expecting Chinese lead prices to rise from October when production at battery makers rises, traders said. Large producers were already limiting spot supplies, hoping to push up prices above 15,000 yuan, which will be 11 per cent higher than spot prices in Shanghai on Thursday.

“People are bullish on prices in October,” a trader in Shanghai said. Dongling Group’s closure of lead production in Shaanxi province was also supporting the rosy forecast, he added. China’s explosion in car usage could last a few years, given the country’s car ownership is relatively low, analysts have estimated.

The shares rose 8.9 per cent to A$5.70, on the Australian stock exchange. Melbourne-based Amcor’s $2 billion takeover will boost sales 50 per cent and may arrest two years of declining profit. It will make the company the world’s largest supplier of packaging to the pharmaceutical, healthcare and personal care industries, and the biggest supplier for tobacco in Europe, according to Deutsche Bank AG.

Amcor plans to sell A$411 million of shares to individual investors from August 24. Amcor also got $1.2 billion in loans for the proposed takeover.