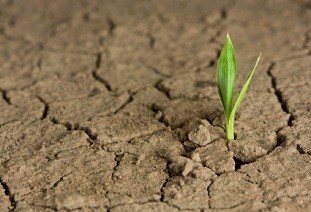 It has been a wild ride for the potash market. In 2008, the price of potash soared to $1,000 per tonne. In 2009, as the recession hit farmers in the pockets, the price retreated to $350 per tonne. In 2010, potash prices staged a modest, incremental comeback with prices currently around $526 per tonne.

Potash’s precipitous price drop in 2009 was a result of the fact that farmers can skip potash applications for one year without seeing a significant reduction in crop yields. In 2009, whilst struggling with low crop prices and difficulty securing financing, farmers skipped their fertilizer applications, sending the price of the crop nutrient plummeting.

The recent U.S. Department of Agriculture survey of central Corn Belt fertilizer dealers shows that since April, prices for potash climbed 5 percent to $526 a tonne with cash prices fetching a premium as growers are anxious to lock up 2011 supplies. Each fall, corn and soybean growers face the daunting task of handicapping fertilizer markets to decide whether to buy and apply their farms’ needs in the fall, or wait until spring and purchase on the spot market.

The price of potash is intimately connected to the price of grains. If grain prices are low, there is little incentive for farmers to encourage maximum yields from their land. If grain prices are high, there is great incentive. In 2010, knowing many farmers had skipped their 2009 applications; analysts were bullish on the potash market. Inclement weather in many growing regions, combined with a flourishing Chinese economy enhanced the bullish tone. While 2010 was a year of recovery, the ascent was gradual, with prices currently about half of their 2008 peak. This leads us to question what 2011 will have in store. Will prices rebound further, or will economic jitters cause farmers to skip another potash application?

It is difficult to make projections for the potash market. The largest contracts are settled upon between giant marketing arms, such as Canpotex, and producers, behind closed doors. Often, these prices are never released due to the marketing firms desire to prevent a bidding war with future purchasers. The best way to predict what potash will do is took take a look at the grain market’s fundamentals.

A forecast from economists at Purdue University, released in November, projects double-digit percentage increases in the variable cost of growing corn, wheat and soybeans next year, with fertilizer the driving force behind the rise. “Crop production around the world, and the demand associated with that, still seems to be the primary driver” behind higher fertilizer prices, Purdue specialist Bruce Erickson said. Higher fertilizer costs are expected to cut into the margins of farmers. U.S. corn futures are up 38 percent from a year ago, while soybean futures have climbed 22 percent. Global supplies for both crops and wheat remain a concern. U.S. farmers spent $44 billion to raise their crops in 2010, with about 41 percent going to fertilizer. USDA estimates average per acre fertilizer expenses for 2010 at $124.26 for corn, $57.32 for wheat and $22.46 for soybeans. As long as the crop prices remain high, there will be a huge incentive to purchase potash. However, where there are bulls, there are bears, and the bears think that the recession may have caused a fundamental shift in the potash market.

The bears claim that the expansions, mergers, and acquisitions spurred by the recession will act as a balance and check on prices. Before, the market was dominated by a few major players; now, many new players are staking a claim to potash niches.  Had BHP Billiton (NYSE:BHP) bid for Potash Corp. of Saskatchewan (NYSE:POT) been accepted, there likely would have been a major shake-up in the potash industry. Potash Corp. is the largest supplier to Canpotex, which in turn is the largest supplier of potash to the world. Canpotex is a marketing arm that settles contracts with purchasers; because it controls such a large portion of the potash supply; it has been accused of “price fixing” and even called a “cartel.” BHP was clear that they had no interest in participating in Canpotex and would instead favour selling large amounts of potash on the open market for lower prices. While this would have been good news to farmers, it is indeed a large factor behind the government of Canada’s decision to block the purchase. The government of Canada blocked the bid because they felt it would not be a “net benefit” to Canada. Why would it not benefit?  Surely lost revenues from selling potash on the open market, rather than as fixed long term contracts came into play.

BHP’s attempt to infiltrate the potash world is not lost. BHP is planning on moving ahead with its Jansen potash project in Saskatchewan. Other major mining conglomerates with deep pockets, such as Vale have stated their interest in breaking into the potash market. The entrance of these major miners into the potash market is bound to shake up fundamentals.