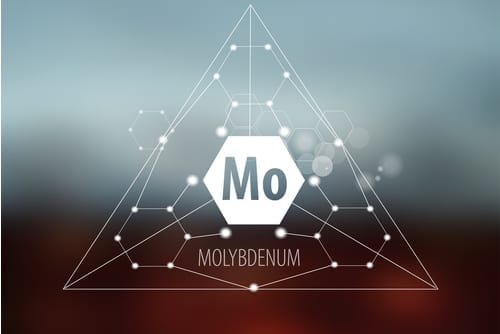 Interested in the molybdenum industry? Read on for a brief overview of the metal, from supply and demand to how to invest.

Molybdenum (or “moly” as it’s often called) is a silver-gray metal with the atomic number 42 on the periodic table of elements. It was first discovered in 1778 and is one of the refractory metals, meaning it is incredibly resistant to heat and wear.

The industrial metal doesn’t occur on its own in nature, and players in the molybdenum industry usually extract it as a by-product of copper and tungsten. It can be found in the minerals wulfenite, powellite and molybdenite, though molybdenite is the main mineral used to produce molybdenum.

According to the International Molybdenum Association (IMOA), 80 percent of the molybdenum that is mined each year is used to make stainless steel, cast iron and superalloys. Molybdenum has a high melting point of 4,730 degrees Fahrenheit, and with the addition of just a small amount of the metal, steel becomes much harder with a high resistance to corrosion, heat and rust.

The remaining balance of molybdenum supply is used as a chemical, particularly in lubricants and paints. The metal is also finding more use in the oil and gas sectors, where refineries use it in catalysts to reduce the amount of sulfur in gasoline and diesel fuels.

According to the IMOA, molybdenum production remained static for the first half of 2019, while global consumption slipped by 7 percent to 136.6 million pounds.

Of the Latin American countries that are molybdenum producers, Chile is the top producer with output of 61,000 MT last year. Peru’s mining industry contributed 28,000 MT of molybdenum to the global supply chain; while Chile contributed 61,000 MT.

The US is also a top-tier producer, adding 42,000 MT of molybdenum to the market last year for various applications.

The US Geological Survey notes that world mining output of molybdenum was up in 2018 at 300,000 MT from 297,000 MT in 2017. The average price of molybdic acid and oxide was 50 percent higher year-over-year in 2018, and there was also an increase in the US import consumption rate.

There has also been an increase in the amount of applications and products in the pipeline that utilize the affordable material.

Due to its resistance to corrosion and ability to withstand high temperatures. Molybdenum offers excellent thermal conductivity and low thermal expansion, making it ideal for a number of technological applications. In addition, the metal is in a strong position to gain as the energy sector expands.

Molybdenum industry: How to invest

As mentioned, molybdenum is often mined as a by-product of copper and other metals. However, there are also mines in the molybdenum industry that focus specifically on the metal.

Centerra Gold (TSX:CG,OTC Pink:CAGDF) has two molybdenum mines that are on care and maintenance, but could be revived once prices improve. It acquired them via its 2016 purchase of Thompson Creek Metals Company. In addition, some molybdenum is recovered from old mine tailings at the site.

Major firms that mine molybdenum as a by-product include Southern Copper (NYSE:SCCO), Rio Tinto (NYSE:RIO,LSE:RIO,ASX:RIO) and Anglo American (LSE:AAL,OTCQX:AAUKF).

It is also possible to invest in companies that are exploring or developing molybdenum-mining or extraction projects. General Moly (TSX:GMO,NYSEMKT:GMO) is moving forward at two Nevada-based molybdenum projects, and says that once they reach production it will be the largest pure-play producer of the metal in the world.

All companies listed in this article had market caps of over US$4 million as of August 30, 2019. If we missed one that you think should be included, please let us know in the comments. And don’t forget to follow us @INN_Resource for real-time news updates!

This is an updated version of an article first published by the Investing News Network in 2012.

Editorial Disclosure: American CuMo Mining is a client of the Investing News Network. This article is not paid-or content.