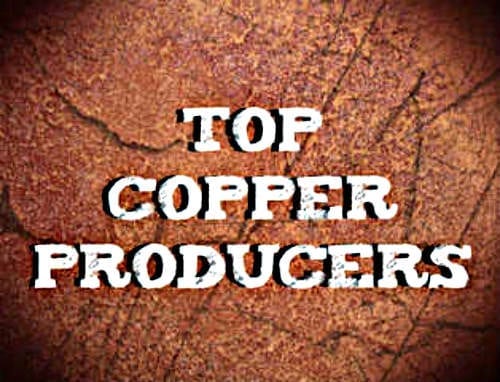 Here’s a look at top copper production by country in 2018, as reported by the US Geological Survey. Chile took the top spot once again.

So far in 2019, the price of copper has faced highs and lows in light of ongoing trade tensions between China and the US, along with supply concerns.

While the red metal has generally trended downwards as of late, many CEOs are bullish and some analysts are “cautiously optimistic” on copper.

Which country was the top copper producer in 2018? Chile took the top spot again, although some of the others on the list may surprise you. Read on to find out which nations made the grade.

Copper production in Chile grew between 2017 and 2018, landing at a total rate of 5.8 million MT in 2018. As one might expect, it was the largest producing country in the world last year.

Chilean copper supply and demand faced a brief spook last year when workers at BHP’s (ASX:BHP,NYSE:BHP,LSE:BHP) Escondida mine — the world’s leading copper mine — agreed to vote on strike action. Tensions ran especially high after a similar scenario played out in 2017, bringing a 44 day strike at Escondida. It was reportedly the longest in recent Chilean mining history.

However, the crisis was successfully dodged when BHP managed to sign a new agreement with workers at Escondida last August, allowing 2018 production rates from the major mine to remain stable.

Peruvian copper production saw a slight drop in 2018 as it reached 2.4 million MT, down from 2017’s total of 2.45 million MT. The main copper operations in Peru include Anglo American’s (LSE:AAL,OTCQX:NGLOY) Quellaveco mine and Southern Copper’s (NYSE:SCCO) Tia Maria mine.

A contributing factor to Peru’s lowered output in 2018 is said to be lower ore grades out of MMG’s (ASX:MMG,HKEX:1208) Las Bambas mine, also one of the largest copper mines in the world. It faced difficulties last year due to wall instability, which restricted access to areas of the Ferrobamba pit.

In mid-2018, Anglo American announced plans to proceed with its Quellaveco mine in Peru, which will reportedly cost US$6 billion over four years. The company de-risked the project by increasing Mitsubishi’s (OTC Pink:MSBHY) share from 18.1 percent to 40 percent in exchange for US$833 million.

China, the world’s largest copper consumer, remained in third place for production in 2018. Its production fell again last year, this time coming in at 1.6 million MT. It also saw a drop in copper imports, as it has cut down on refinery and blast furnace production as part of its anti-pollution program.

Zijin Mining Group (SHA:601899,OTC Pink:ZIJMY) is a leading metal producer in China. The company owns the Zijinshan gold-copper mine, as well as the Shuguang gold-copper mine.

It’s worth mentioning the trade war between the US and China, now going strong since 2018. It has meant high tariffs for Chinese exports, and some reports claim manufacturing work, which requires copper, has been cooling as a result.

Stepping up its copper production last year was the Democratic Republic of Congo (DRC). Production rates grew from 2017’s 1.09 million MT to 1.2 million MT in 2018, with the US Geological Survey citing a decrease in supply disruptions and the restarting of temporarily closed mines and electrowinning plants for the increase.

One major copper asset on the rise in the DRC is Ivanhoe Mines’ (TSX:IVN,OTCQX:IVPAF) Kamoa-Kakula project, a joint venture the company shares with partner Zijin Mining Group. In the last few months, Ivanhoe has received investments intended for the project totaling over C$679 million; one was C$67 million from Zijin, the other, a massive C$612 million boost from CITIC Metal Africa Investments, a subsidiary of Ivanhoe stakeholder CITIC Metal (OTC Pink:CTPCY,HKEX:0267).

Tying for fourth place is the US, which saw its copper production decrease in 2018 as it sank from 1.26 million MT to 1.2 million MT. According to the US Geological Survey, the decline was partly due to reduced output from several mines throughout Arizona and New Mexico, the former of which was the leading copper-producing state last year as it accounted for 66 percent of US output.

One of the US’ biggest copper assets is the Bingham Canyon copper mine, part of Rio Tinto’s (NYSE:RIO,ASX:RIO,LSE:RIO) Kennecott operations. The major miner’s subdivision recently announced its plan to transition to renewable electricity at Kennecott, which also encapsulates the Copperton concentrator, the Garfield smelter, a refinery, power plant and associated facilities.

The trade war mentioned above also of course affects the US. With China being a major consumer of the red metal, these tensions could mean that the US will cool its own copper production if it doesn’t have enough buyers. It is currently too early to tell how this situation may play out.

One of Australia’s largest copper operations is BHP’s Olympic Dam copper-uranium–gold deposit in South Australia; while the asset is more known for its uranium production, it maintains a strong stance as the fourth largest copper deposit in the world.

Also worth noting is Queensland’s Mount Isa, run by a subsidiary of Glencore (LSE:GLEN,OTC Pink:GLNCY). It is one of Australia’s largest copper producers, and the two copper mines that operate out of Mount Isa collectively process 6.5 million tonnes of ore each year.

According to Mining for Zambia — an initiative run through Zambia’s Chamber of Mines — there are four major mines that dominate the country’s copper production. These include Barrick Gold’s (TSX:ABX,NYSE:GOLD) Lumwana, First Quantum Minerals’ (TSX:FM,OTC Pink:FQVLF) Kansanshi, Mopani Copper Mines (majority owned by Glencore) and Konkola Copper Mines, a subsidiary of Vedanta Resources (NYSE:VEDL).

These mines account for approximately 80 percent of the country’s yearly copper production.

While Indonesia has been hyping up nickel to become one of its major exports, the Southeast Asian nation also has a strong presence in copper. The country comes in eighth place on this list at a production rate of 780,000 MT, having jumped from 2017’s production total of 622,000 MT.

The country is home to Grasberg, the largest gold mine in the world and the second largest copper mine. Located in Indonesia’s Papua province, the massive asset was acquired by state-controlled company Inalum in December 2018 in a US$3.85 billion deal with Freeport-McMoRan (NYSE:FCX) and former joint venture partner Rio Tinto following an official announcement in late September.

One of the biggest copper mines in Mexico is Grupo Mexico’s (BMV:GMEXICOB) Buenavista del Cobre operation in Sonora, also referred to as Cananea. It has been in operation since 1899 and has an estimated copper reserve of almost 27 million MT.

One of the biggest copper operations in Russia is the Udokan deposit in Siberia, which is currently owned by Baikal Mining Company. The deposit made headlines last year when it was revealed that Baikal was looking to raise US$1.25 billion to develop a mining and metallurgical plant at the project. It is now under construction.

Best Junior Gold Stocks of 2020 on the TSXV
ERG: Copper Prices Could Reach US$7,000 Next Year
Australia’s Lithium Producers Could Benefit from Vertical Integration
5 Top Weekly TSXV Stocks: Decade Leads, Up Over 150 Percent