Intrusion-related gold systems are an important source of gold. They are a new gold deposit classification, and have only been formally named and characterized over the last decade or so.

This article was originally published on Gold Investing News on April 18, 2011. 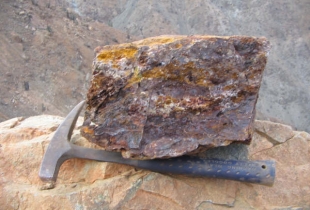 Intrusion-related gold systems, or IRGS, are important sources of gold. They are a new classification of gold deposits, though they have been recognized for some time. It has only been in approximately the last 10 years that IRGS deposits have been formally named and characterized.
IRGS are an example of an important fact that should be considered when learning about mineral deposits in general: mineral exploration and modeling is still advancing, and when it comes to deposit types and classification scheme, there are a great deal of “gray areas.”
In this intro to IRGS we will look at the basic characteristics, and significance of these deposits, but please keep in mind that the delineation of these deposits is not as black and white as many older, more studied deposits, such as porphyry deposits. Furthermore, a full description would involve talking in depth about geochemistry and mineral assemblages that would only be interesting, and understandable to the geologists in the audience. Instead, the focus of this article will be on the broad characteristics that make should prompt investors to pay close attention when they see these deposit types mentioned in press releases and NI 43 -101 documents.

The discovery of IRGS

In 1999, Thompson et al. introduced a new intrusion-related class of deposits that emphasized intrusion-related gold mineralization in regions lacking in copper, but known for their tungsten and tin. These systems were identified as distinct from intrusion-related gold deposits associated with chalcophile oxidized magmas. In order to differentiate between the two types, Lang et al. (2000) introduced the term intrusion-related gold “systems” (IRGS). “System” was emphasized to highlight the wide range of associated gold deposit styles within this scheme. Intrusion-related gold deposits refer to an incoherent group of deposits with wide-ranging characteristics produced by local-scale fluids derived from a cooling pluton.
IRGS are major, intrusive deposits that most often occur in a continental setting. IRGS are significant sources for gold; however, they also can contain significant amounts of bismuth, tellurium, tungsten, tin, lead, copper, arsenic, and antimony. These intrusive-related deposits are distinct from orogenic deposits. Orogenic deposits form in response to a deformation of the earth’s crust as the plates collide, and/or separate. Intrusive deposits are formed when parts of the earth’s mantle that is heated cools. Generally, cooling is a result of magma moving towards the earth’s surface and thereby encountering lower pressures and temperatures. This distinction is very important, as it makes a big difference in the business of gold mining and exploration. Of particular importance is the fact that cooling of the intrusive material into a pluton results in minerals being deposited in temperature dependent concentrated metal zones. These metal zones are a result of the thermal gradients surrounding cooling plutons. The resulting mineralization is commonly found in several different styles: variably intrusion and country-rock hosted consisting of skarns, replacements, disseminations, stockworks and veins. Gold mineralization is characterized by a wide range of gold grades, with bulk mineable volumes present at the 0.8 to 1.5 gram per tonne level. IRGS can host large volumes of gold, for example, the Fort Knox deposit hosts a contained resource of approximately 4 M oz. of gold, the Pogo approximately 4.8 M oz, the Kidston around 4.5 M oz, and Donlin Creek more than 10 M oz.

Timbarra
Made up of four separate deposits, (Poverty Point, RMT, Hortons and Surface Hill) that exhibit a unique morphology controlled by the size of the host intrusive body; granite facies associations; and variable structural controls such as cooling joints, veins, sills, dykes and faults. The four deposits have a total identified mineral resource of 13.65 Mt at 0.95 g/t gold (417 000 oz. of contained gold) and a proven and probable reserve of 10.06 Mt at 1.01 g/t gold (327 000 oz. of contained gold- as of1988). In addition to gold, the deposit hosts molybdenum, bismuth, antimony and arsenic. Timbarra was closed in 2001- after heavy rainfalls sparked worries of cyanide poisoning. Timbarra was plagued by environmental controversy through its operating years. The last operator of the mine was Placer Dome, a company that was taken over by Barrick Gold (TSX:ABX) in 2006, after Timbarra was closed.
Kidston
Until 2001, when the mine ceased operations, Kidston was the largest open-pit gold mine in Australia. Kidston is a zone polymetallic porphyry system centered on a hydrothermal breccia pipe. It hosts140 t contained gold including zoned mineral deposits of zinc, lead, copper, arsenic and molybdenum.

Miners and explorers with interests in IRGS