When it comes to gold exploration, the saying goes “gold is where you find it.” Gold is found in a variety of geological settings, and is contained within sedimentary, igneous, and metamorphic rocks. 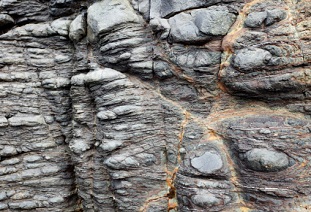 When it comes to gold exploration, the saying goes “gold is where you find it.” Gold is found in a variety of geological settings, and is contained within sedimentary, igneous, and metamorphic rocks. Various classification systems have been developed, many of these can be quite confusing if you are not a geologist. The most basic classification system is to group gold deposits into two broad categories; primary and secondary.
Primary deposits form where gold precipitates during chemical reactions between hydrothermal mineralizing solutions and rocks in the Earth’s crust. To further simplify primary deposits, they can be classifications as epigenetic and syngenetic. Epigenetic are deposits that form after the formation of the surrounding rocks while syngenetic deposits refer to deposits that form at the same time as surrounding rocks. In epigenetic hydrothermal deposits gold may occur as the principle metal or as a secondary mineral associated with other metals, such as iron, copper, lead and zinc.


Grab Your Free Report!
Secondary deposits, also commonly referred to as “placer deposits”, are formed from the weathering and erosion of primary deposits that are later re-concentrated into gold-bearing sedimentary deposits. Secondary gold occurrences are generally classified according to their depositional environment. Marine placers occur offshore near coastlines, and fluvial placers occur in rivers and stream valleys.
Gold can also occur is somewhat unexpected places. In fact, quartz-pebble conglomerates and quartzite deposits are an unusual place to find gold. While these locales may be an unexpected place to find gold, they are, overall, the world’s largest source of gold- supplying more than 50 percent of the world’s gold. These deposits may also be economic sources of uranium, thorium, and rare earths.
The origin and evolutions of these styles of deposits is complex, and diverse, and beyond the scope of this piece. There are, however, some basic characteristics that can help identify these types of deposits. The ore bodies in the quartz-pebble conglomerate deposits are marked by the presence of abundant pyrite or hematite with variable and usually minor to trace amounts of a host of other sulfides, arsenides, and sulfosalts. The gold is mainly present as the native metal in a very finely divided form essentially in the matrix of the conglomerates or quartzites; minor amounts of the element also occur in the pyrite and in the various other sulfides, arsenides, sulfosalts, and so forth. Elements concentrated in the quartz-pebble conglomerate type of deposit are variable.
When it comes to quartzite deposits, in the past these deposits have been overlooked because the gold in quartzite can be invisible to the unaided eye.  The gold in quartzite occurs when sandstone is metamorphosed by hydrothermal action with gold and silver bearing hydrothermal waters that further cements the grains together. Sandstone is porous readily giving this water access. It is the silica in the water causes the transformation of sandstone into quartzite by cementing the individual grains together.


Grab Your Report
Uranium
It is important to note that gold bearing, quartz pebble conglomerates can be an important source of uranium. In fact, they were the primary source of uranium for several decades after World War II.  The most significant deposits of this type are the Huronian Supergroup in Canada and in the Witwatersrand Supergroup of South Africa. These deposits make up approximately 13 percent of the world’s uranium resources. The deposits are typically low grade but characterized by high tonnages.
The Witwatersrand
The Witwatersrand of South Africa is a quartz pebble conglomerate that hosts economic reserves of gold and uranium. The Witwatersrand Gold Rush of 1886 has been attributed to the establishment of Johannesburg. The “Rand” or reef, as the Witwatersrand is sometimes known, is famous for being the source of 40 percent of the gold ever mined from the earth. It extends for 280 kilometers from Klerksdorp in the west to Bethal in the east and is 4 kilometers deep in places. The deposit was such a key component to the development of South Africa, that the local currency “The Rand” was named after it.
Quartz-pebble conglomerate deposits are a valuable asset for miners and explorers. Here is a sample of miners/explorers with interests in gold quartz-pebble conglomerate deposits:
Gold One International (ASX:GDO)(JSE:GDO) (formerly BMA Gold)
Yamana Gold (TSX:YRI)
StrikePoint Gold (TSXV: SKP)