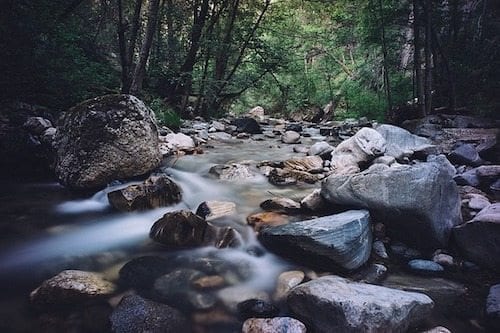 Alluvial mining is an old technology, but it’s still fairly common today. Some mining companies use the technique, though it’s more often a source of income for individual laborers in areas like Africa and South America.

But what exactly is alluvial mining? Put simply, it’s the mining of stream bed deposits (also known as alluvial deposits) for minerals. These alluvial deposits are formed when minerals are eroded from their source, and then transported by water to a new locale.

When the sediments are deposited, they settle according to their weight, with heavier, more valuable minerals like gold, diamonds and platinum often being deposited at the same time.

Alluvial mining can be a very simple process. For instance, small-scale alluvial mining that’s undertaken by individual laborers involves digging and sifting through materials such as mud, sand or gravel using shovels, sieves or a laborer’s bare hands.

However, with simplicity comes disadvantages — these operations are not very productive, lack safety and tend to have a high environmental impact. They are also often done illegally and outside of regulatory framework.

Of course, alluvial mining can also be done more efficiently and more safely by mining companies; that said, with most miners focused on larger deposits, the process is less common.

Alluvial mining for gold dates back a long time — the Romans used alluvial mining to produce gold, and in the 19th and 20th centuries, alluvial mining was made famous by the California and Colorado gold rushes, among others. A variety of alluvial mining techniques were used over this time, but all relied on the same premise: using water to wash gold-bearing sediment.

Loose gold-bearing sediment is understandably the preference for individual laborers, while consolidated deposits require the capital and force of mining companies. It’s fairly uncommon to hear about alluvial gold-mining companies, but one example is Brazil Minerals (OTCMKTS:BMIX), which operates the largest alluvial processing plant for diamonds and gold in Latin America.

Around 10 percent of the world’s rough diamonds are sourced through industrial alluvial mining, while another 14 percent are uncovered by individuals using small-scale alluvial mining techniques. Alluvial diamond mining is particularly prevalent in Africa — for example, De Beers has alluvial mining operations in Namibia. And as mentioned, Brazil Minerals is pursuing the activity in Latin America.

Alluvial mining for platinum is discussed less often than alluvial mining for gold and diamonds, and it has a shorter history. According to Johnson Matthey (LSE:JMAT), alluvial deposits of platinum were first mined in Russia’s Ural Mountains back in 1823, and although they were the most dominant source of platinum by the end of the 19th century, that dominance didn’t last. By the end of the 1920s, the most easily accessible high-grade deposits had been largely exhausted.

Since then, alluvial mining for platinum has largely dwindled to a handful of small-scale dredging operations, though Johnson Matthey does note that large quantities of the metal have recently been produced from two alluvial deposits in Russia’s Far East.

Furthermore, there’s some interest in renewing alluvial mining for platinum in the Urals. One company active there is Eurasia Mining (LSE:EUA), which holds the West Kytlim alluvial platinum project.