Uranium has been in a low price environment for years, but it wasn’t always that way. What was the highest price for uranium?

Uranium is an important metal in the energy sector, providing fuel for nuclear power generation, which supplies 10 percent of global energy needs.

Over the past decade, the uranium price has struggled to recover from the fallout of the the 2011 Fukushima nuclear disaster. To refresh your memory, a massive earthquake and subsequent tsunami severely damaged several Japanese nuclear reactors.

As a result, the demand for new nuclear reactors fell drastically as public fears over the radioactive risks understandably rose. This lack of demand growth coupled with excess supply have weighed heavily on both the uranium spot price and uranium contract prices over the last decade or so.

In turn, low prices have hamstrung uranium exploration and mine production in recent years. Many major companies have placed their operations on care and maintenance until uranium prices move above US$50 per pound — the key level at which uranium production becomes economically viable.

Since 2012, the uranium price hasn’t moved above that important US$50 level, leaving many investors disappointed. But in 2020, uranium market watchers have started to see some light at the end of the tunnel as supply cuts from major producers like Kazakhstan’s Kazatomprom and Canada’s Cameco (TSX:CCO,NYSE:CCJ) potentially set the stage for higher uranium prices.

As with many of the world’s most critical commodities markets, the global COVID-19 crisis has derailed uranium production. A key indicator that rising uranium prices may be on the horizon came in late August 2020, when Kazatomprom announced that it had started buying uranium on the spot market to fulfill contracts after the coronavirus pandemic upended the global market. Analysts with a bullish sentiment for yellowcake began to call for a potential uranium market rebound.

If the minimum price for a return to good times in the uranium sector is US$50, what was the highest price for uranium? Read on for the answer to that question, as well as a look at what factors have shaped historical prices. We’ll also consider what all this means for both the current uranium price and the energy metal’s price in the future.

Highest price for uranium: How is uranium traded?

Before discovering the highest price for uranium, it’s worth looking at how this commodity is traded. To truly understand how prices are set, investors need to know how yellowcake is bought and sold.

While it is possible to trade uranium futures on the NYMEX or through CME Group (NASDAQ:CME), investors can’t take actual possession of the metal as they can with precious metals. The obvious reason is that uranium is highly radioactive; therefore, international laws exist that regulate all aspects of the uranium supply chain, from how the metal is mined and refined to how it is transported and stored, as well as how it changes hands in the marketplace.

Unlike other commodities such as gold and silver, physical uranium does not trade on the open markets. Buyers are often utilities companies that purchase enriched uranium for use as nuclear fuel through privately negotiated contracts with sellers. Uranium contracts can range between two and 10 years, and are either set at a long-term fixed price or use the current uranium spot price as a base price, with economic corrections to be made at later dates based on an agreed-upon formula.

A one time uranium delivery can be bought based on the spot price at the time of purchase, but this only occurs in about 15 percent of uranium deals. Uranium spot market buying is often conducted by producers looking to fulfil contracts in the face of output shortfalls, as Kazatomprom did in August 2020.

What was the highest price for uranium? The uranium price peaked at US$136.22 in early June 2007, an impressive increase after it started the year at US$72.

The top price ever for uranium is a far cry from where it was at the dawn of the 21st century, when it trading at a low of US$7. The price began its upward trend in 2003 on increasing global energy demands and the role of nuclear energy in meeting those demands, especially in China and India.

Part of what caused the massive uranium price uptick came from the supply side — Cameco’s massive Cigar Lake mine in Saskatchewan flooded in 2006, delaying the start of production for several years. Being one of the largest undeveloped uranium deposits in the world, the unexpected delay took a serious toll on the market, and contributed to the exponential growth in prices in 2007.

The high price levels seen in 2007 didn’t last. The 2008 economic crisis sent prices for uranium crashing, along with other commodities. By early 2009, prices had fallen below the key US$50 level and slid further in 2010 to the US$40 range. Signs of global economic recovery and the coinciding rising demand for energy metals in 2011 was very price positive for uranium.

Meanwhile, the low price environment over the years prior significantly sidelined uranium exploration and development, heightening supply-side concerns that were also supportive of higher uranium prices. As a result, prior to Fukushima uranium prices were shooting up past the US$70 level.

After the Fukushima fallout, the U3O8 spot price was on a slow slide to lows not seen since the start of the century, bottoming at US$18 in November 2017. Uranium has since struggled to break US$29.

As mentioned, in 2020, the uranium spot price began moving higher, increasing more than 30 percent in the first half of the year. In May, prices hit a four year high of US$33.93. However, by mid-September, prices had pulled back to the US$30 level. 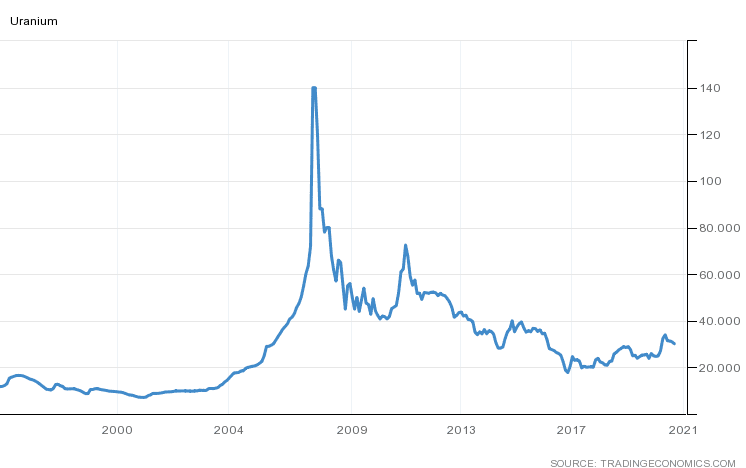 Will the uranium price rebound? That question remains to be answered, although Rick Rule of Sprott (TSX:SII,NYSE:SII) had some advice for uranium market watchers when the Investing News Network spoke with him in January 2020.

“I would encourage speculators who can afford the risk and are patient to participate, because the universe of good uranium issuers is very small. And when the market returns, which it will, the upside could be absolutely dramatic. But if you’re impatient it’s the wrong game,” he said.

About 10 percent of the world’s energy needs are met by nuclear energy generated by the current number of 440 reactors. With 53 nuclear reactors in various stages of construction worldwide, the nuclear energy sector is one of the biggest drivers of demand for uranium.

On the supply side, years of ultra-low uranium prices have kept juniors from searching out new uranium resources to bring to market, while major producers have shuttered mines and mothballed expansion projects. Examples include Cameco’s closure of the Saskatchewan-based McArthur River mine in 2018 and the uranium giant’s temporary closure at Cigar Lake in response to the COVID-19 pandemic.

These operations are considered the world’s top two uranium-producing mines and both are in Canada, ranked as the world’s second largest uranium-producing country after Kazakhstan. Responsible for 43 percent of global uranium production, Kazakhstan began cutting its annual production levels in 2018 and plans to continue “flexing down” its uranium output through 2022. Australia, Niger and Namibia round out the top five of the world’s largest uranium producers.

We’ve answered the question, “What was the highest price for uranium?” But it remains to be seen if uranium can escape the doldrums to make a rebound. The main factors to watch continue to be growth in the number of nuclear reactors online and under construction as well as decreasing mine supply.

For more information on entering the market, click here to read our overview of stocks, exchange-traded funds and uranium futures.