The uranium spot price experienced momentum in the third quarter of 2021, but can it continue moving forward?

2021’s third quarter saw the U3O8 spot price take a leap, making its most pronounced gain in a decade.

A decline in mined supply in 2020, the entrance of the Sprott Physical Uranium Trust (TSX:U.UN) and concerns regarding potential future shortages pushed the spot price to a nine year high in late September, when values briefly surpassed the critical US$50 per pound threshold.

Despite pulling back slightly in the weeks since then, the energy fuel looks to have entered the long-awaited bull run that market watchers have been anticipating.

July saw U3O8 continue its upward trend for the seventh consecutive month of the year, as prices moved to the US$32.40 level. Between January and July, the price added 9.1 percent to its value.

Much of the Q3 upside came courtesy of the Sprott trust, which officially launched on July 19. Birthed out of the acquisition of Uranium Participation, a Toronto-based holding company investing nearly all of its assets in uranium, the Sprott trust began to quickly make waves in the nuclear fuel sector.

The Sprott trust’s inclusion in the tightening uranium market served to highlight the growing discrepancy between rising demand and the current low production level.

While COVID-19 has weighed on uranium, it’s important to note that output levels had been on the decline prior to the pandemic as miners worked to incentivize price movement. Curtailments seen in 2020 reduced global output of the commodity by roughly 35 percent.

In fact, 2020 global production tallies came in at just 56,287 tonnes, representing 74 percent of total demand. Last year was also the first time in 10 years that output slipped below 60,000 tonnes.

Investors looking for a “buy the dip” moment were rewarded in August as the U3O8 spot price fell flat in the US$30 to US$32 range; experts have long considered the elusive US$50 to US$60 level the threshold miners and explorers need to bring on new supply.

But throughout the quarter, nuclear energy’s green potential continued to be a point of discussion.

“We firmly believe that the only way that we can move forward with a low-carbon, abundant-energy world is through the widespread adoption of nuclear power,” Adam Rozencwajg, managing partner at Goehring & Rozencwajg, said during an early September interview.

“Whether or not people wake up to that or not I think will be a matter of time, but if you’re serious about wanting to reduce CO2 emissions, there’s really no other way that you can do that other than uranium and nuclear power,” he explained to the Investing News Network (INN).

Nuclear energy currently accounts for 10 percent of global electricity at 440 reactors located around the world. There are more than 50 additional reactors set to come online over the next decade, while as many as 100 reactors are now in the “discussion” phase.

As those more than four dozen new reactors become operational, supply constraints will only grow. Also in the demand mix is buying from numerous companies — in the first half of 2021, Cameco (TSX:CCO,NYSE:CCJ), Denison Mines (TSX:DML,NYSEAMERICAN:DNN), Uranium Energy (NYSEAMERICAN:UEC) and Yellow Cake (LSE:YCA,OTC Pink:YLLXF) all announced plans to increase their own physical uranium inventories and meet contracts with spot market purchases.

As Rozencwajg explained, the past decade has brought consolidation in the industry, and right now the market is still waiting for utilities to pen nuclear fuel contracts. “Now you’re making this really complex sort of bumping, muddled bottom, and typically what that tells me is that the bull market it’s setting up for will be that much stronger and more stable and resolute,” he said.

By the end of August, the U3O8 spot price had recovered its earlier losses, closing at US$34.25.

As Q3 progressed, the Sprott trust amassed uranium, often posting about its multimillion pound purchases on Twitter (NYSE:TWTR) — once even using a Pacman reference.

By mid-September, holdings had ballooned to more than 27.7 million pounds worth US$1.46 billion.

“Sprott’s purchasing activity is bringing institutional capital back to the industry by demonstrating the uranium price fell below its real value, they say,” states a report from S&P Global.

“Large financiers fled the space after the 2011 Fukushima Daiichi reactor disaster in Japan led to a political backlash against nuclear power, but rising commodity prices and positive tailwinds for ‘green’ businesses seem to be sparking a return to U3O8.”

As Sprott’s holdings surpassed the US$1 billion level, the U3O8 spot price rocketed to a nine year high of US$50.91. By September 21, the energy fuel had added a whopping 71 percent to its value since January and 48 percent since the beginning of Q3 alone. 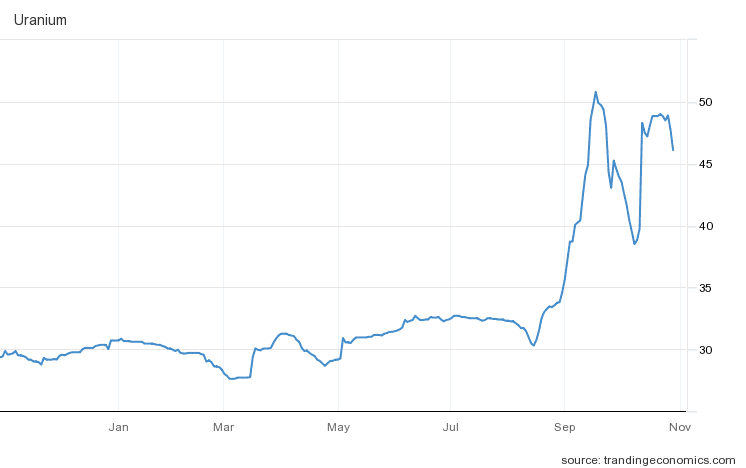 The rapid pace prompted Justin Huhn, founder and publisher of the Uranium Insider Pro newsletter, to suggest that the market would move quickly over the next 18 to 24 months.

“It’s a unique period of time,” Huhn told INN in late September. “(Sprott is) just new to the scene, they really shook things up — I mean, nobody expected a 50 percent move in the uranium price based on the 10 million pounds they purchased. Nobody saw that coming.”

Watch the full interview with Huhn above.

According to Huhn, the very nature of the Sprott trust, which is to buy and hold uranium, is enough to majorly disrupt the sector. “They just purchased 10 million pounds in one month. It’s probably safe to assume that they could very likely be consuming all of the available spot market pounds that are coming from primary production, and essentially offsetting at the very least the amount of pounds that are sold in the market from secondary supply, which is 20 million to 25 million pounds a year,” he said.

“It’s just a monstrous development to have a potentially consistent buyer in the spot market that is not concerned about the price they’re paying. So they’re not trying to buy as low as possible because they have no intent in reselling those pounds.”

After September’s rally to US$50, the U3O8 spot price pulled back to end the month in the US$44 range, a trend Huhn chalked up to select traders working to get prices lower at month’s end, when contracts for the next month are locked in. But uranium’s time below US$30 seems to have ended.

Sustained positivity in the spot values is likely to lead to some production increases; however, at this point it remains hard to gauge just how much. For most of the last decade, production has been coming offline in an attempt to counter persistently low prices, and getting more uranium supply to market requires more than just a flip of a switch or adding more work crews.

The market is also affected by lags and disruptions in global supply chains. As Huhn pointed out, even Kazatomprom, the leading producer, which has both the capacity and permits to ramp up production, would require a large window between the decision to increase output and that enhanced production.

“Even in a perfect world, if they were to pour resources into vastly increasing their wellfield development currently, they’re not going to see an increase in that production until at the very soonest next summer, and the peak of that would be about 18 to 24 months from now,” he explained to INN, adding that he expects the rising price to incentivize more production.

Whether uranium hits the US$136 high set in 2007 remains to be seen. But unlike that market, the current environment is being impacted by factors that were non-existent 14 years ago.

“All bets are off with the spot price of uranium, because it’s not going to be driven by fundamentals for the most part; it’ll be driven by supply and demand,” said Huhn. “The buyers (will) likely to continue to be — at least for the short term — primarily driven by financial interests.”

The rebranding uranium and the nuclear fuel sector have undergone in the last few years is another factor that makes today’s uranium market slightly different, but still exciting.

“Uranium wasn’t some clean, green machine in 2007 and it is now. It’s really interesting how that psychology (for) the public has turned,” Nick Hodge, editor of Daily Profit Cycle, told INN. “You’re not going to be able to meet your climate goals without really increasing nuclear production.”

Hodge went on to highlight the 180 degree turn the US Democratic party has shown in the last 18 months with regard to nuclear. Led by President Joe Biden, the current administration has recently come out in support of a Trump-era uranium reserve strategy that would see the country purchase domestically produced uranium for a national stockpile.

“I’m not sure there’s anything else they can agree on here in the states right now, but they agree on uranium, and that’s something that is different,” added Hodge.

The editor of Daily Profit Cycle also pointed to social communities like Twitter and WallStreetBets on Reddit, where information regarding stock picks and plays is exchanged rapidly, saying the speed at which information is transferred may impact how quickly the price rises.

Hodge advised investors looking to enter the uranium market to gain broad exposure with producers, developers and explorers at various risk levels. Aside from that, he highlighted jurisdiction.

“I would be looking for places that are safe jurisdictions … (such as) North America, South America and Australia, for example,” he said. “If you were to look at my uranium holdings, you would see those jurisdictions reflected across the entire value chain of uranium, honed in on those specific jurisdictions.”

Investing News Network
Energy Investing
GoviEx Uranium Inc. announces that, pursuant to its Share Purchase Option Plan, it has granted incentive stock options to the Company's Head of IR and Corporate Communications to purchase up to an aggregate of 500,000 Class A common shares in the capital stock of GoviEx.The stock options are exercisable at a price of $0.39 per share and will vest 25% on the date of grant and thereafter, 25% on each anniversary of ...

GoviEx Uranium Inc. (TSXV: GXU) (OTCQX: GVXXF) ("GoviEx" or the "Company"), announces that, pursuant to its Share Purchase Option Plan, it has granted incentive stock options to the Company's Head of IR and Corporate Communications to purchase up to an aggregate of 500,000 Class A common shares in the capital stock of GoviEx.

The stock options are exercisable at a price of $0.39 per share and will vest 25% on the date of grant and thereafter, 25% on each anniversary of the date of grant until fully vested. The options expire on December 1, 2026.

GTI Resources Ltd (GTI or Company) is pleased to advise that the Company has adopted the internationally recognised Environmental, Social and Governance (ESG)StakeholderCapitalismMetricsframework with 21 core metrics and disclosures created by the World Economic Forum (WEF).