What happened in the cobalt market this year? Here’s a look at the major cobalt trends in 2017, from responsible sourcing to electric vehicle demand.

It has been a bright year for cobalt, a key metal in the lithium-ion batteries used to power electric vehicles (EVs).
Carmakers and governments shifting toward electric cars, as well as increasing supply worries, have made news headlines throughout the year.
As 2017 comes to a close, the Investing News Network is looking back at the main trends in the space this year, from rising EV demand to surging prices to responsible sourcing.
Read on to learn what happened in the cobalt market in 2017, including supply and demand dynamics and what market participants had to say during each quarter of the year.

At the beginning of the year, cobalt prices received a boost from increasing demand for electric cars, primarily from China. In Q1, consultants at CRU Group said electric car and plug-in hybrid vehicle sales could hit 4.4 million in 2021 and more than 6 million by 2025, up from 1.1 million last year.
As demand for electric cars increase, the need for cobalt is also expected to soar, as the metal is a key component in EV batteries. In total, surging demand for electric vehicles is expected to push demand for lithium-ion batteries above 400 GWh by 2025, Benchmark Mineral Intelligence says. Lithium-ion batteries contain about 11 kilograms of cobalt each.
“[W]e forecast battery demand for cobalt to go from 46,000 tonnes in 2016 to 76,000 tonnes by the end of 2020 and from a cobalt producers perspective supply needs to keep up with, or be close to, expanded demand,” Benchmark Mineral Intelligence analyst Caspar Rawles said in February.
In terms of supply, the major news of the quarter came from top cobalt producer Glencore (LSE:GLEN), which upped its involvement in the market. The Swiss giant paid $960 million to increase its stakes in two copper-cobalt operations in the Democratic Republic of Congo (DRC), Mutanda Mining and Katanga Mining (TSX:KAT). The latter is expected to become the world’s largest cobalt producer when it restarts production at some point next year.
But while the move was a good one for Glencore, analysts don’t expect it to help fill demand for cobalt. “Glencore already had a controlling interest in both of these projects prior to the deal and I don’t forecast any increase in supply that isn’t already anticipated in the market,” Rawles explained at the time.
Also at the start of the year, Tesla (NASDAQ:TSLA) announced plans to open two to three EV gigafactories by the end of 2017, further spurring excitement among cobalt investors. Elon Musk’s company started production at its Nevada facility in January, and by 2018 the gigafactory is expected to produce 35 GWh per year of lithium-ion battery cells.
During the first quarter of 2017, LME cobalt prices jumped more than 68 percent, trading between $32,500 and $54,750 per tonne.

During the second quarter of the year, LME cobalt prices, as well as prices for cobalt sulfate, the most common base chemical used as a cathode material in batteries, continued to increase. 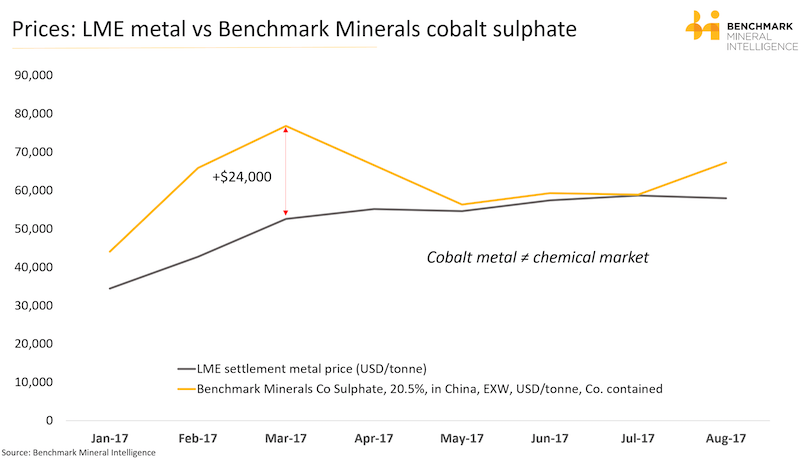 Chart via Benchmark Mineral Intelligence.
In Q2, the electric car story gained momentum, with analysts at UBS (NYSE:UBS) raising their forecast for global sales of EVs in 2021 to 3.1 million from 2.5 million, and to 14.2 million in 2025.
“Demand is remarkably strong,” Eurasian Resources Group CEO Benedikt Sobotka said in June. He added that “[p]eople [were] inquiring about lifetime offtake contracts” for the company’s $1-billion Metalkol Roan tailings reclamation project in the DRC. The project is expected to produce 14,000 tons a year.
In terms of supply, concerns continued to increase during the second quarter of the year. “In the next few years only five new cobalt mines are due to come online and will add about 50,000 tons of cobalt per year. That is certainly not enough to support the demand in the market,” Stephan Bogner of Rockstone Research said at the time.
Concerns about existing cobalt supply also started to increase. That’s largely because the politically unstable DRC is the world’s top cobalt producer, accounting for more than 50 percent of cobalt output; mining there is also linked to child labor.
In an April interview, Rawles explained that while there are some cobalt projects in more stable jurisdictions that may ultimately add to supply, it will not be possible to eliminate DRC cobalt. “There’s no lithium-ion industry without DRC cobalt,” he emphasized. That said, he also mentioned that even with DRC cobalt the market is headed for a deficit.
Major news impacting the market during the quarter came from Tesla’s Musk, who hinted at “probably four” more gigafactories to be announced later in 2017. At the end of June, Tesla also announced that battery production for its upcoming Model 3 was underway.
LME cobalt was up 7 percent during the second quarter, trading between $51,500 and $59,500.

At the beginning of the second half of the year, announcements from major governments hit the cobalt market. France, the UK and potentially China outlined plans to ban all fossil fuel cars by 2040. Other countries have also set electric car sales targets or have hinted at bans on ICE cars in the coming years; those countries include Norway, Germany and the Netherlands.
In addition, several carmakers said they will electrify most of their models by mid-2020s, including Volvo (STO:VOLV), BMW (ETR:BMW), GM (NYSE:GM), Mercedes, Dyson and Ford (NYSE:F), among others.
Even so, China continued to lead the EV space, with the government pushing for all-electric battery cars and plug-in hybrids to account for at least one-fifth of its vehicle sales by 2025. Partnerships between major carmakers and local firms were another major trend during the quarter, with Renault-Nissan (EPA:RNO) and Ford fighting for a place in the surging EV market.
In the third quarter, sales of electric vehicle and plug-in hybrid batteries exceeded 287,000 units, up 63 percent compared to the same period last year on the back of strong Chinese demand. That number is expected to increase significantly as the electric car revolution continues to unfold.
As a result, carmakers and battery companies started to look for ways to secure the materials needed to make lithium-ion batteries, in particular cobalt. In July, mining giant Glencore signed a large cobalt deal with Chinese producer Contemporary Amperex Technology that could help Volkswagen (FWB:VOW) secure batteries for its electric cars.
Later in the quarter, Volkswagen announced it was seeking to invest $60 billion in electric car content, including batteries, and was looking to sign cobalt supply deals by the end of the year.
LME cobalt remained neutral during the third quarter, trading between $50,000 and $62,000.

In Q4, carmakers and battery companies continued to try to secure long-term cobalt supply. In November, China’s Contemporary Amperex Technology outlined plans for a $2-billion IPO to boost its lithium-ion battery production, and announced it was looking to invest in upstream companies.
Later in the month, Volkswagen was said to be discussing supply contracts with top cobalt producers, including Glencore, but the talks ultimately ended without success.
“We have requested different options for a hedge from the raw materials industry in the context of a tender … We have already had constructive talks with the well-known suppliers and will continue those (discussions),” a Volkswagen spokesperson recently confirmed. “Besides supplies and costs, other topics in discussion include future capacity expansion, sustainability and transparency.”
Indeed, transparency and responsible sourcing have been one of the main cobalt trends surrounding the market in the past few weeks. In November, Amnesty International released a report warning that electric car companies are “not doing enough” to tackle human right abuses in their cobalt supply chains. Among carmakers, the report shows that BMW has made the most improvements, while Renault and Daimler (ETR:DAI) “performed particularly badly.”
After the study was published, the LME launched an investigation over concerns that cobalt traded on its exchange could be linked to child labor. In addition, a group of 10 carmakers announced that it will set up a Raw Materials Observatory to assess the risks posed in the auto sector by crucial materials like cobalt.
“Over time we will see a division in the market between those companies that will be able to demonstrate they are following responsible sourcing practises and those that are not, and that will have an impact on market demand from those companies,” RCS Global director Harrison Mitchell said earlier this year, explaining what the consequences will be for those who decide not to follow ethical and responsible practises in the cobalt industry.
“Producers will need to wake up to the fact that they will need to demonstrate that they are sourcing in a responsible way [and not just say that they are],” he also noted.
During the last quarter of the year, cobalt prices continued to increase, and the forecast for next year remains very optimistic. LME cobalt has been trading between $59,000 and $68,000. For investors interested in learning more about what’s ahead for cobalt, keep an eye out for our upcoming cobalt outlook with commentary for analysts and companies.
Don’t forget to follow us @INN_Resource for real-time news updates!
Securities Disclosure: I, Priscila Barrera, hold no direct investment interest in any company mentioned in this article.