CEO Elon Musk confirmed last week that the company will reveal the locations later in 2017.

There’s been a lot of speculation in the cobalt market since January, when Tesla (NASDAQ:TSLA) announced plans to open two to three electric vehicle (EV) gigafactories by the end of the year.
Last week in a TED2017 interview, CEO Elon Musk stoked speculation further by confirming that the company will announce locations for “probably four” gigafactories later in 2017. Although he did not reveal the locations for the new gigafactories, most market watchers believe China is on the list, as Musk met with the country’s vice premier in April.
Another possible location is Europe, where many countries are hoping to attract Tesla and the jobs the company’s gigafactories can create. France has attempted to captivate Tesla by offering incentives for consumers to go electric, but most of Tesla’s European efforts are focused on the Netherlands and Germany. In November of last year, Tesla bought German firm Grohmann Engineering and announced plans to hire 1,000 new staff.

This is the lithium battery megafactory that will effectively be Tesla’s Gigafactory 2 – Panasonic in Dalian, China. ?? https://t.co/LZZyMzQZMj 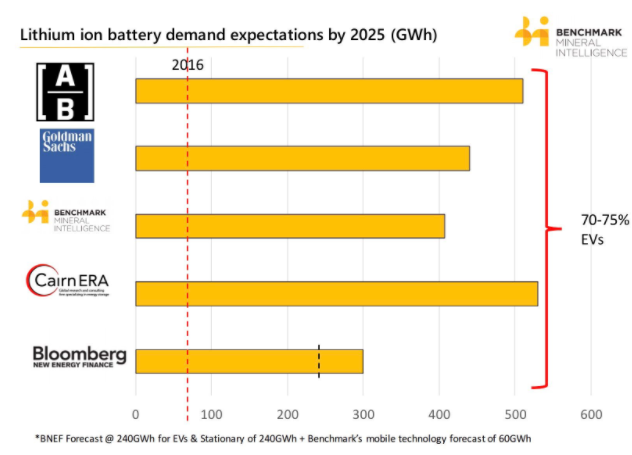 Chart via Benchmark Mineral Intelligence.
In a recent interview with the Investing News Network, Benchmark Minerals Intelligence analyst Caspar Rawles highlighted exactly how much the advent of these megafactories will impact the cobalt market. He explained that despite some growth in other industries, cobalt demand will be almost entirely driven by EVs in the next few years.
“[In] 2016 megafactory for cobalt was about 46,000 tonnes. By 2020 that’s going to be 76,000 tonnes, so there’s going to be a lot of growth in the coming years,” he said.
It’s still uncertain where new cobalt supply will come from, but investors interested in the space will no doubt be watching Tesla and the world’s other megafactory builders for clues. For now it’s clear that the increasing importance of EVs is creating huge opportunities in the space, as well as in the lithium and graphite spaces.
Don’t forget to follow us @INN_Resource for real-time news updates.
Securities Disclosure: I, Priscila Barrera, hold no direct investment interest in any company mentioned in this article.