Here’s an overview of the main factors that impacted the copper market in Q3 2021, and what’s ahead for the rest of the year.

After reaching an all-time high of US$10,700 per tonne during the second quarter of the year, copper traded around the U$9,000 mark for most of Q3.

Prices performed with volatility throughout the period as labor negotiations shared center stage with the Evergrande (HKEX:3333,OTC Pink:EGRNF) crisis in China.

In a year full of speculation as economies around the world reopen, the copper market saw prices break the US$10,000 mark — a level many could not have predicted this time last year. 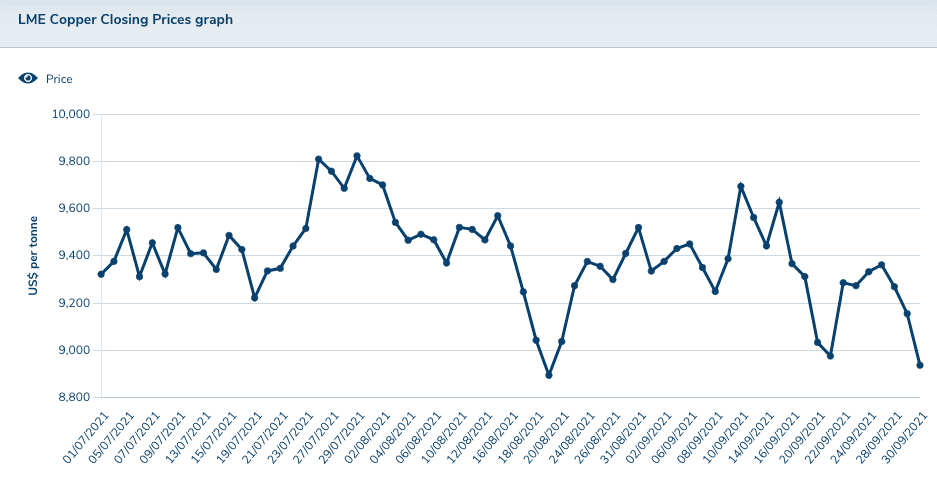 Copper started the third quarter of the year at U$9,296.50 as prices corrected after the all-time high reached in May. The metal ended the period almost at the same level, trading at US$9,040.

After the highs seen in the second quarter, Dan Smith of Commodity Market Analytics said he was expecting prices to retreat. “We were looking for a 4 percent drop in copper prices in Q3, and the market pulled back by 4.5 percent as expected,” he said.

For Karen Norton of Refinitiv, prices were due for a period of consolidation after the sharp run up to new record highs in the second quarter.

“While well supported below US$9,000, we believe a push higher would have proven difficult against the fundamental backdrop,” she added.

Developments in copper supply and demand dynamics took an interesting turn in the third quarter. In China, the world’s top copper consumer, there was growing evidence of slowing demand.

“Additionally, the Evergrande debt crisis, which raised concerns of contagion in the country’s property sector, and the power squeeze, with worries that demand would be worse hit than supply, were some of the key factors to dominate,” Norton said.

Property giant Evergrande’s more than $300 billion debt crisis hit the markets back in September, as concerns over what it could mean for China’s construction industry hit base metals prices across the board. However, fears had eased by the end of the month.

“On top of that, there was caution about (US Federal Reserve) tapering, while on the other side of the equation were a number of supply concerns and actual disruptions that served to keep the market tighter than it might otherwise have been,” Norton added.

For Smith, there were two main factors weighing on copper prices in Q3. Firstly, mine supply growth started to accelerate and this resulted in a significant jump in treatment charges.

“These were up by 66 percent in Q3, a significant recovery from a very low level in Q2,” he said.

Looking ahead, demand is looking resilient in Organization for Economic Co-operation and Development countries heading into Q4, helped by easing lockdown measures as COVID-19 is fading as a driving force, Smith said.

“Supply chain disruptions are significant, but this is being offset by powerful tailwinds coming from low interest rates and fiscal stimulus measures. Consumers also have high levels of unspent savings.”

Meanwhile, China is set for a bumpy ride in Q4, according to Commodity Market Analytics.

“High levels of debt in the property market create a significant downside risk for copper demand, and property prices have stalled due to glut of unsold inventory,” Smith said. “Indicators for cement and steel suggest that the construction market is already in recession.”

Refinitiv is also expecting China’s copper demand to fall in Q4 compared to the same period last year, when levels were boosted by the post-COVID-19 recovery.

“Despite this softening picture, in construction specifically, the start of some infrastructure projects that previously had been delayed is expected to help underpin growth,” Norton said.

In terms of supply, output from South America’s powerhouses — Chile and Peru — is forecast to remain flat in the fourth quarter compared with the same period last year.

“It still looks set to be a year of above-trend growth for copper mine production, benefiting in part from the recovery from the impact of COVID,” Norton commented to INN. “But despite Peru’s bounce from the Q2 2020 sharp decline aside, much of the growth is coming from elsewhere, including the Democratic Republic of Congo, which is benefiting from the Kamoa-Kakula project, and Indonesia with the improvements at the Grasberg mine.”

A few labor contracts are expiring at some major mines in the fourth quarter, the largest being Codelco’s El Teniente mine — which produced 443,000 tonnes of copper in 2020.

“Developments will be watched closely in the present environment, but if the trend so far is anything to go by, labor disruptions will not make a significant dent in the overall supply picture,” Norton said.

Looking at how prices could perform in the last quarter, Smith said a wave of bullish sentiment swept through commodity markets in the first half of October, creating upside risks for copper.

“While we believe that fundamentals will remain mixed, speculators are likely to focus on more bullish elements, including falling inventory levels and higher input costs coming from rising energy costs,” he said. “Given this, we expect prices to trend higher in the months ahead.”

For her part, Norton said copper may attempt an attack on its record high before the year is out. “But we believe it will struggle with the fundamental backdrop becoming less supportive,” she said.

Commenting on what could impact the copper market going forward, Smith said central banks will soon start to tighten monetary policy by reducing quantitative easing and then raising interest rates.

“This has the potential to create a shock wave in financial markets, which could undermine copper as well,” he said. “If wage levels start to ratchet higher, then we should be battening down the hatches!”

Economics of the Copper Scrap Market

Investing News Network
Copper Investing
Ivanhoe Mines President Marna Cloete, on behalf of all the women and men of the company, today congratulated Founder and Executive Co-Chairman, Robert Friedland, on his induction into the American Mining Hall of Fame for accomplishments during his distinguished career in the international mining industry.Mr. Friedland's formal induction ceremony was held in Tucson on December 4th, and attended by approximately 500 ...

Ivanhoe Mines (TSX: IVN) (OTCQX: IVPAF) President Marna Cloete, on behalf of all the women and men of the company, today congratulated Founder and Executive Co-Chairman, Robert Friedland, on his induction into the American Mining Hall of Fame for accomplishments during his distinguished career in the international mining industry.

Investing News Network
Copper Investing
Ivanhoe Mines reports that the new COVID-19 variant, Omicron, has had no impact on any of its mining or mine development operations in South Africa or the Democratic Republic of Congo .No cases of the new variant have been detected at the company's Kamoa-Kakula and Kipushi projects in the DRC and, while there have been some recent infections among employees and contractors working at the company's Platreef Project ...

Ivanhoe Mines (TSX: IVN) (OTCQX: IVPAF) reports that the new COVID-19 variant, Omicron, has had no impact on any of its mining or mine development operations in South Africa or the Democratic Republic of Congo (DRC).

No cases of the new variant have been detected at the company's Kamoa-Kakula and Kipushi projects in the DRC and, while there have been some recent infections among employees and contractors working at the company's Platreef Project in South Africa, all people infected to date have either been asymptomatic or experienced very mild symptoms.