Silver's precious and industrial sides competed for dominance in 2022, but as the year draws to a close the metal's price isn't far from where it started.

After a year of market volatility, geopolitical strife and high levels of inflation, the silver price has remained relatively steady and is on track to end 2022 on par with its early January value.

Starting the year at US$22.86 per ounce, silver held above US$20 from January to July before its correlation to gold and a strong US dollar forced it lower. The metal remained rangebound below that threshold for most of the third quarter.

Upside from strong investment demand and a recovery in industrial use helped the white metal rebound after its price fell to US$17.62 at the beginning of September, a 26 month low.

Read on to learn more about what trends impacted the silver sector in 2022.

What trends impacted the silver sector in 2022?

Although all silver demand segments excluding photography are set to post gains for the year, silver remains well below 2021's price levels, with its status as a precious metal outweighing its positive demand fundamentals.

Their expectation is that the white metal will continue to feel pressure from ongoing interest rate hikes from the US Federal Reserve, rising yields and strength in the US dollar.

According to Philip Newman, director of Metals Focus and co-author of the silver report, silver’s price activity will be contingent on how the global economy reacts to inflation. “I think concerns about recessions had quite a bearing on the relative underperformance for silver (from) a price point of view,” he said.

It's also possible that industrial demand could face headwinds after 2022's robust showing.

“Additional stress will also come from silver’s industrial nature, as growing fears over a possible recession will weigh on sentiment, despite its extremely favorable fundamental backdrop,” the report explains.

As mentioned, silver garnered assistance from its industrial side in 2022, with its role in automotive electrification and the 5G sector helping to push annual demand 5 percent higher.

However, as Newman explained, that strength didn't help the silver price.

“Normally, when you have gold prices starting to really accelerate, silver being a much, much smaller, much more illiquid market tends to outperform to the upside,” he said. “And we haven't really seen that.” 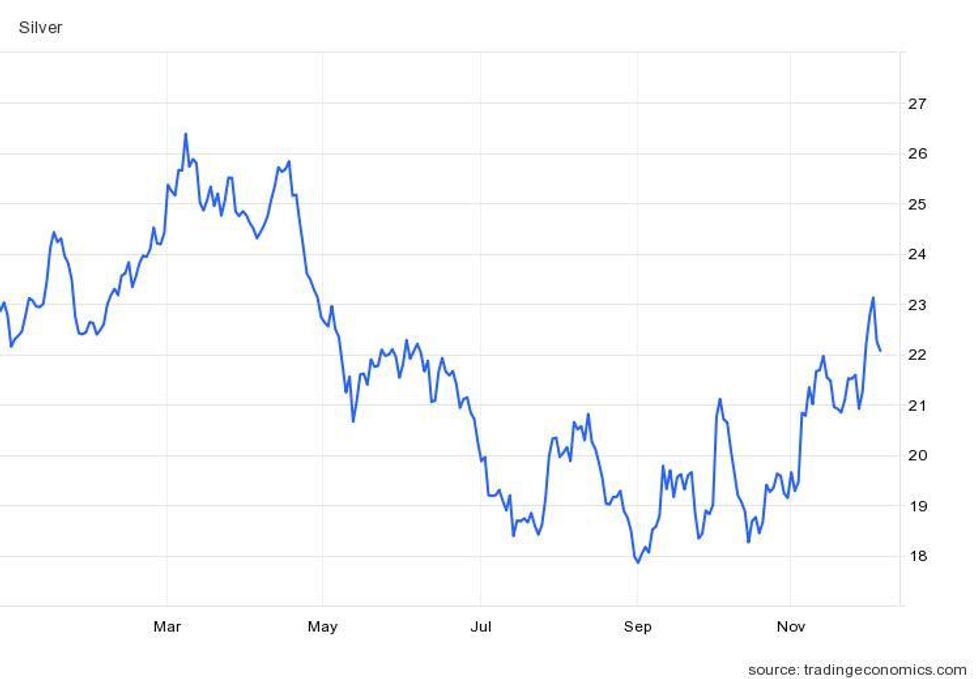 “I think for the time being, (silver’s) industrial characteristics, which from an analysis point of view are going brilliantly well, are also weighing on it from a price point of view as well,” Newman said.

As most key demand segments move into peak territory, fueling silver's 121 billion ounces of total demand, the market is expected to be at a deficit for the second consecutive year. Total supply for 2022 is likely to be 194 million ounces short, representing a “multi-decade high and four times the level seen in 2021.”

“The rise was boosted further by a (near-doubling) of Indian demand, a recovery from a slump last year, with investors often taking advantage of lower rupee prices,” the Silver Institute and Metals Focus explain in their report.

The jewelry and silverware segments are also both on course to see new highs. Together, demand from these segments will exceed 300 million ounces for the year. “This has partly been driven by strong inventory replenishment ahead of the festive and wedding season, following heavy stock depletion in 2021,” as per the document.

However, this growth will be offset by “the largest annual decline” in exchange-traded product holdings. The 110 million ounce decrease has been attributed to profit taking from institutional investors.

“You've got institutional investors taking a bit of a cautious view of silver, (which) played out against (physical) demand going to the races,” Newman told the Investing News Network.

Early in the year, concerns that Russia’s invasion of Ukraine could remove as much as 3.3 million ounces of silver from annual production served as a price catalyst for the white metal.

The 8.5 million ounce reduction out of those regions will be offset by production growth in South and North America. In fact, a 25 percent, or 10.1 million ounce, uptick out of Chile will make up more than enough.

Adam Webb, director of mine supply at Metals Focus and co-author of the Silver Institute and Metals Focus report, explained the numbers further. “We are expecting strong growth in mined silver production from Mexico as several major silver projects come online and continue to ramp up,” he told the Investing News Network.

Chile will benefit from Kinross Gold’s (TSX:K,NYSE:KGC) La Coipa project, which came into production earlier in the year.

“This operation is primarily a gold mine, but will also produce a significant amount of silver,” Webb said. “Growth from these two countries, alongside smaller increases from elsewhere, is expected to surpass falling output from other major producers, such as Peru, China and Russia, and lead to a 1 percent year-on-year rise in global output.”

In terms of cost, price positivity across the commodities sector during the first half of the year contributed to lower all-in-sustaining costs (AISC) for silver producers, allowing them to balance the rising costs of energy and transport with higher metals values.

“This is due to the higher by-product metal prices in the first half of the year,” Webb said. “Prices for lead, zinc, copper and gold were all higher year-on-year in H1, leading to increased by-product revenues for primary silver producers.”

“In the second half of the year, the prices of these metals have fallen, and we therefore expect by-product revenues to decline and AISC to rise for silver miners in H2,” he noted.

After ending the third quarter at US$19.02, the silver price has been on an upward trajectory, briefly touching US$23 in early December. Currently the white metal is trading for US$22.65.