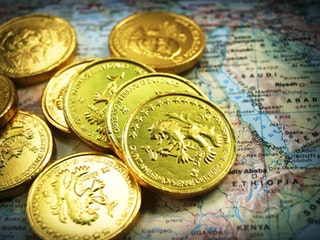 China, Australia and Russia are the largest producers of gold in the world, but which countries round out the list? Find out here.

Gold has been making consistent gains in 2019 so far, reaching highs not seen in over three years.

The lowest price for gold this year came at the beginning of 2019, and the highest level came in August, as the US and China experienced greater-than-usual tensions. Additionally, global gold demand increased 4 percent in 2018, according to the World Gold Council.

Last year’s gold mine production worldwide was estimated to be approximately 3,260 tons, which is an increase from 2017’s 3,230, based on numbers reported by the US Geological Survey.

So what are the top 10 gold producing countries that contributed to that output? Read on for a rundown of each country and what you as an investor should know about investing in gold stocks as they are a product of global gold production.

Once again, China was the largest producer of gold in the world, mining 400 metric tons (MT) in 2018. The country has now held its top position for over a decade. China’s production dropped by 40 MT in 2018, and the decrease is thought to be the result of increased environmental regulations.

According to the World Gold Council, China was the main engine of growth in 2018, despite witnessing a slowdown in Q4 as the trade war with the US and slowing economic growth rate weighed on demand and gold jewelry buying slowed last year as demand decreased by 3 percent,

Recent exploration activity in the Pilbara region of Western Australia has renewed interest and helped increase the country’s consistent gold output. While the Pilbara region is typically best known as one of the world’s largest producers of iron ore, the region is currently in the midst of increased gold exploration thanks to a major discovery in 2017 by Novo Resources (TSXV:NVO,OTCQX:NSRPF) and Artemis Resources (ASX:ARV,OTCQB:ARTTF).

Russia was once again the third-largest producer of gold in 2018, with its output increasing from 255 MT in 2017 to 295 MT last year. Additionally, the country plans to increase output over the next decade or so.

Gold production in Canada rose marginally in 2018, allowing the nation to maintain its status as the fifth largest producer of the yellow metal.

Peru saw a slight decrease in gold production last year, with output slipping from from 151 MT in 2017 to 145 MT in 2018. The country saw its lowest level of production and exports in 2014, and has since made a slight recovery.

That said, illegal gold mining continues to be a struggle for the country, and has been responsible for the devastation of land, including patches of the precious Amazon forest.

It is also worth noting that Ghana recently took the top spot as Africa’s largest gold producer. Moreover, the country hosts more estimated reserves than key gold-producing countries such as Peru.

Mexico is another gold producer that saw a production increase last year, knocking South Africa out of the 8th spot to claim it for itself.

While Mexico was plagued by underwhelming gold prices and maturing gold mines that caused production challenges in 2017, the country was able to increase its gold production from 110 MT to 125 MT in 2018. Today, gold and silver account for more than 50 percent of the country’s total metals output.

South Africa’s gold production decreased in 2018 compared with 2017, falling from 137 MT to 120 MT last year. The country’s gold output has fallen 85 percent since 1980, but it has been one of the world’s top gold producers for decades.

In recent years, South Africa has been hit with political strife, mostly due to conflicts between the Association of Mineworkers and Construction Union (AMCU) and gold producers in the area. AMCU has held many protests and strikes at several gold and platinum mines within the last two years in the hopes of garnering more wages and stopping any merger between companies in which the union believed job loss would ensue.

Despite this, South Africa is currently estimated to have the world’s second largest quantity of gold reserves at 6,000 MT.

Uzbekistan comes in tenth on the list of the largest producers of gold. The country produced 105 MT of gold in 2018, up slightly from 100 MT in 2017. The country’s Muruntau gold mine is one of the largest open-pit mines in the world. Uzbekistan has been producing from old mines for quite some time, and has not seen much exploration investment.

Why invest in gold stocks?

As concerns around an economic growth slowdown and a basket of geopolitical issues continue to plague the market, investors are turning to gold for its safe haven nature. For many market participants, gold has been a reliable portfolio diversifier due to the fact that it has the ability to act as a hedge against portfolio volatility.

Global gold production is climbing, so now may be the best time to invest in a gold stock, which is one of the most popular ways to invest in the output from these countries.

Additionally, the second half of 2019 has seen gold entering a period of prosperity, making gains not experienced in years as it shot up over 7 percent by the close of Q2. Due to the fact that, as the value of the metal goes up, gold stocks rise even further, this form of gold investing can be an ideal way for investors to gain exposure to the metal.

With that in mind, there may be no better time than the present when it comes to buying gold stocks. Below are a few more reasons why it may be enticing for you as an investor to enter the gold market.

While purchasing physical gold bullion via bars, coins and jewelry is the most direct way to gain exposure to gold prices, it also has the payment of high commissions attached to it, as well as additional costs that come from transportation, storage and insurance of the gold bullion.

Due to the fact that gold stocks are not a tangible investment, market participants are able to own the metal without having to pay the fees associated with physical assets.

Although investing in gold stocks is an indirect way to gain exposure to the precious metal, there is an upside to this because it offers more growth potential. Since 10 ounces of gold today will remain the same 10 ounces of gold in the years that follow, gold bullion doesn’t produce an income stream. Many investors, including Warren Buffett, shy away from the yellow metal for that very reason.

However, because gold companies tend to expand over time, investors can benefit from gains in gold production — an added bonus that does not come with holding gold bullion.

There are two main types of gold stocks — those of large cap companies and those of junior miners.

Large cap gold companies are known for the lower level of risk that comes with investing in them. While some companies have an easier time multiplying share price than others, investors are not likely to experience stock that rises 10 times in value (also known as a 10 bagger).

Despite the stocks not being able to rocket in price, investing in a large cap company also protects market participants from large swings within the market. If there are no bolstered gains, there are no extreme losses either. Large miners are generally easy to value as they sell at large-cap valuations.

On the other hand, investing in junior mining stocks can be tricky, and it is often challenging for investors to pick out winners within the stock market.

If a junior makes a big discovery, very few of them have the mining operations necessary to develop a property; for many, the goal is to hit upon a deposit that’s attractive enough to catch the attention of a major producer that will buy it from them at a profit.

Even though the odds of success are low, many investors are attracted to junior mining stocks. As resource specialist Peter Krauth of Money Morning writes, “All it takes is just one 10 bagger to make up for all the dogs in the pound.”

The relationship between gold stocks and gold production

When investing in gold stocks, it is important to understand that they have a direct relation to gold production. If an investor has purchased a share from a company that is experiencing a high level of production, they can get more for their return based on those production rates.

However, the downside to this relationship can be seen if an investor has purchased shares from a company that is experiencing low levels of production or if extraction of the yellow metal has cost the company a significant amount of money. Production can also be negatively pressured by harsh environmental issues where the mines reside, shutdowns due to care and maintenance and even mine strikes from local workers.

When looking at gold stocks from the lens of how they can be affected by gold production, it appears they are an investment with more risk for more reward.

Interested in the stocks that are currently making waves in the market? INN has recently reviewed a list of 6 gold stocks to watch in 2019 according to Raymond James analysts.

For other possible gold mining companies to invest in, check out our lists of the TSX and TSXV-listed gold stocks that are up the most year-to-date.

30 responses to “Largest Producers of Gold by Country”