Most of 2020 was a volatile trading year for copper as the coronavirus pandemic took center stage. However, in the second quarter of 2021, prices for the red metal hit an all-time high, trading above US$4.75 per pound.

Interestingly, by looking backward it’s easy to see that the spike is an expected feature of the long-term picture for copper prices. In recent years, the red metal has rebounded after a downtrend from about 2011 to 2015, and over the last few decades prices have increased even more dramatically.

Case in point, at the start of 2021, copper was up more than 400 percent since 2000. Although this impressive major increase doesn’t account for inflation, it is still a sizeable gain. What’s more, copper prices were more or less on the rise during the latter half of the 20th century.

That’s because of one key factor that brought major changes to the industry: the rise of modern heap-leach technology. Leaching has long been used in mining operations, but the method in its modern form didn’t start gaining popularity until around 1980.

“That fundamentally changed the way we mine copper,” Ioannou said. “Up until then, a lot of copper mining was for the most part focused on sulfide mineralization producing a copper concentrate that you’d send to a smelter. With heap-leach technology, all of a sudden the giant porphyries (and) the oxidized caps associated with large porphyries down in South America became viable.”

That sounds like good news for increasing copper supply, but as Ioannou noted, large-scale deposits are often low grade, meaning that they’re more costly to mine despite relatively cheap heap-leaching methods. That’s no doubt had an effect on copper prices.

While Ioannou stated that supply and demand dynamics are the main driver behind copper prices, he also noted that grades and production costs are factors as well. Demand for copper keeps growing, and he suggested that since “the low-hanging fruit has been mined,” miners must increasingly go after more difficult, large, low-grade and costly deposits to meet that need.

“The price of copper dictates how low you can go on the grade,” he said, “Back pre-1970s, I’m guessing a lot of copper was coming from a lot higher-grade mines … as we’ve been mining more and more of these large-scale deposits that are low grade, the cost on a per-pound basis has gone up.”

What else has driven historical copper prices?

Many supply and demand factors have contributed to the movement of historical copper prices over the years. For example, a report from the US Geological Survey notes that the Vietnam War meant strong demand in the mid-1960s and early 1970s, leading to price controls to limit domestic copper prices.

Subsequently, in July 1998 prices “had fallen to their lowest level since the Great Depression,” while an earlier production boom in the 1980s led prices to fall on the back of resulting oversupply.

Global demand for copper is currently dominated by China, and those following the resource market will no doubt remember a large spike in Chinese demand that sent prices for copper and other commodities soaring in recent years. China is still a strong copper demand driver, with the most recent data showing that it was the largest consumer of refined copper at 11.98 million tonnes in 2020.

US tariffs on China have impacted the Asian nation’s copper demand, and it’s tough to say what’s going to happen moving forward. The trade war between the two countries has dampened prices for metals like copper, and analysts have noted that the country’s infrastructure and property sectors, both of which require large amounts of copper and other commodities, are also showing signs of weakness.

In addition, the Chinese government is looking to rein in credit growth in the economy. Some also say the country is stockpiling copper as a strategic move during this time of conflict.

What’s next for copper?

Interestingly, some take another view on the historical performance of the copper price.

Richard Schodde, managing director at MinEx Consulting, gave a presentation on the subject back in 2010 that looks at a longer timeframe – 110 years to be exact. On that scale, historical copper prices have actually dropped significantly since the 1910s.

Schodde told the Investing News Network by email that real copper prices have dropped about 50 percent over the past 100 years, and that production costs have also fallen due to economies of scale and advances in mining and processing technologies.

That might not sound like good news for copper, but Schodde views the drop as a good thing overall. He predicts that the industry will continue to innovate in order to exploit lower-grade deposits and meet growing global demand for copper.

Plus, it’s worth considering where you get in. Looking at the graph below from Schodde, it wouldn’t be ideal if you invested in copper back in the 1910s, but it’s more likely that investors now will have jumped in at some other point on the graph. It all comes down to strategy, timing and, frankly, a bit of luck. 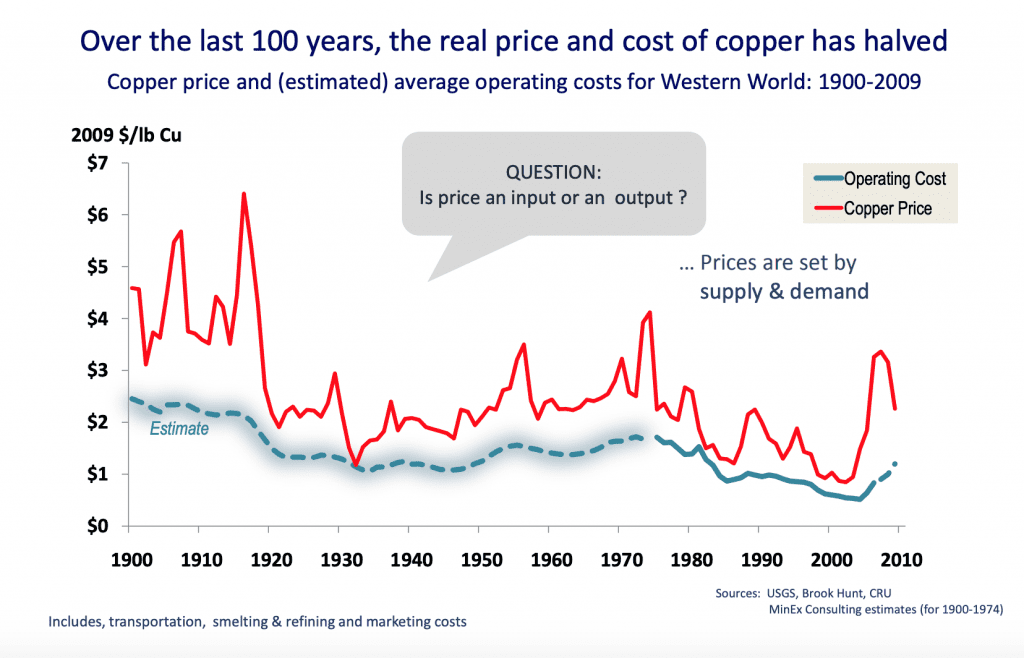 In the short term, copper price volatility is still in the cards due to market uncertainties created by US economic and foreign policies, including the trade war between the US and China, and the prolonged impact of the coronavirus pandemic on the global economy.

However, some analysts are quite optimistic looking longer term. In a recent research note, Goldman Sachs (NYSE:GS) expressed confidence that copper’s long-term fundamentals remain strong, and said that the copper price is “poised for the next leg higher.”

Based on historical copper prices, where do you think the red metal is headed?

Don’t forget to follow us @INN_Resource for more updates!

One response to “A Look at Historical Copper Prices”