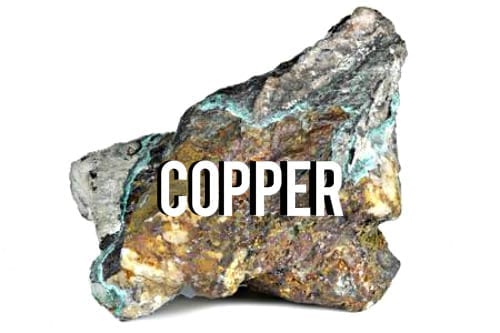 What are the different types of copper ore, and how are they processed? Here’s a brief primer on the subject for investors.

Copper-containing rock, or copper ore, holds only a small percentage of copper. Most of the rock is unwanted material, typically referred to as gangue.

There are two main types of copper ore of interest: copper oxide ores and copper sulfide ores. Both ore types can be economically mined, though they are processed in different ways.

Copper sulfide ores are typically the most profitable types of copper ores to mine. That is because they have high copper content, and the copper in them can more easily be separated from unwanted minerals. However, copper oxide ores are more abundant.

Read on for an overview of the types of copper oxide ores and copper sulfide ores, with a focus on how they’re processed. For investors interested in the space, having a good handle on this information can be an important part of deciding which companies involved in mining the red metal are best to invest in.

Oxidized copper orebodies may be treated in several ways. For instance, hydrometallurgical processes are used to treat copper oxide ores that are dominated by soluble minerals, such as copper carbonate minerals. These copper oxide ores are usually leached using sulfuric acid to liberate the copper minerals into a solution of sulfuric acid laden with copper sulfate solution.

The copper sulfate solution, called the pregnant leach solution, is then stripped of copper via a solvent extraction and electrowinning (SX-EW) process. Alternatively, the copper can be precipitated out of the pregnant leach solution through a process called cementation, whereby the copper is contacted with scrap iron. Copper produced through cementation is usually less pure than SX-EW copper.

Some supergene sulfide deposits can be leached using a bacterial oxidation heap leach process to oxidize the sulfides to sulfuric acid. That also allows for simultaneous leaching with sulfuric acid to produce a copper sulfate solution.

As with oxide ores, SX-EW tech is used to recover copper from a pregnant leach solution. Secondary sulfides, which are formed by supergene secondary enrichment, are resistant to sulfuric leaching.

When rich enough, native copper orebodies may be treated to recover contained copper through equipment such as a gravity separation circuit. Supergene copper ores rich in sulfides may be concentrated using froth flotation.

An additional point to note is that chalcopyrite, a brass-yellow mineral, has been considered the “most important” ore of copper for thousands of years.

This particular ore occurs in most sulfide mineral deposits, with some chalcopyrite existing in veins; some of these ores contain significant amounts of zinc instead of iron ore. Chalcopyrite is also associated with similar minerals such as pyrite, sphalerite and bornite.

One of the areas where this mineral is found is in mining industry major BHP’s (ASX:BHP,LSE:BHP,NYSE:BHP) Olympic Dam asset in South Australia, which consists of a large underground mine, along with surface operations, the project also features two grinding circuits where high-grade copper concentrate is extracted from sulfide ore.

The deposit also hosts large amounts of other mineral resources such as gold, silver and uranium.

The above information provides a good overview of the types of copper ore and how they’re processed, but as all savvy investors know, more information is better. We suggest reading our article on world-class copper deposits to get a better understanding of how copper is found and how it’s extracted from mines.

This is an updated version of an article first published by the Investing News Network in 2011.