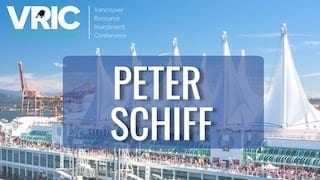 Peter Schiff of Euro Pacific Capital explains why he thinks we’re headed toward the biggest bear market in the dollar’s history.

The US stock market is a bubble, and sooner or later it’s going to pop, says Peter Schiff of Euro Pacific Capital. And when it does, it won’t be pretty for investors who haven’t prepared.
“This is the tip of the iceberg, this is the beginning,” he said at the recent Vancouver Resource Investment Conference. “Last year … was the first year of the dollar decline — [and] this is not just a decline, this is going to be the biggest bear market in the dollar’s history.”
He added, “this time I think the dollar loses its role as the reserve currency … I think now it’s over for the dollar. Now the dollar is just going to be another currency, and that’s going to be a game changer.”
Schiff also shared his thoughts on cryptocurrencies, describing bitcoin as “a classic bubble, probably the biggest bubble I’ve seen in my lifetime.” He explained, “bitcoin is nothing … somebody can give it to somebody else, so you can own it. But if there’s nobody who wants it, there’s nothing that you can do with it. There’s no actual use other than the fact that you can give it to somebody.”
So where does Schiff suggest investors put their money in the current environment? “People need to be in gold and gold stocks, emerging markets, foreign stocks, real assets,” he said. “Avoid the US bond market, the dollar, overpriced stocks in the US [and] around the world.”
Watch the video above for more insight from Schiff on the dollar, gold and the US economy. The transcript for this interview will be added shortly.
Don’t forget to follow us @INN_Resource for real-time news updates!
Securities Disclosure: I, Charlotte McLeod, hold no direct investment interest in any company mentioned in this article.
Editorial Disclosure: The Investing News Network does not guarantee the accuracy or thoroughness of the information reported in the interviews it conducts. The opinions expressed in these interviews do not reflect the opinions of the Investing News Network and do not constitute investment advice. All readers are encouraged to perform their own due diligence.

3 responses to “VIDEO — Peter Schiff: It Could be Over for the Dollar”