What happened to gold in Q2 2019? Our gold price update outlines key market developments and explores what could happen moving forward.

The second quarter of 2019 proved to be one of the best that gold has experienced in years, with the yellow metal making gains of over 7 percent by the close of the period.

A softer US dollar, geopolitical issues and a slow in economic growth were the main catalysts behind the precious metal’s ability to trend between US$1,270 and US$1,420 per ounce during the quarter.

With an additional boost from the US Federal Reserve hinting at an interest rate cut, investor interest has finally begun returning to the gold space.

Read on for an overview of the factors that impacted the gold market in Q2, plus a look at what investors should watch out for in the months to come.

The price of gold ticked up 7.24 percent in Q2. As the chart below from Kitco shows, gold was relatively flat until it surged at the end of the quarter, reaching its highest level towards the end of June. 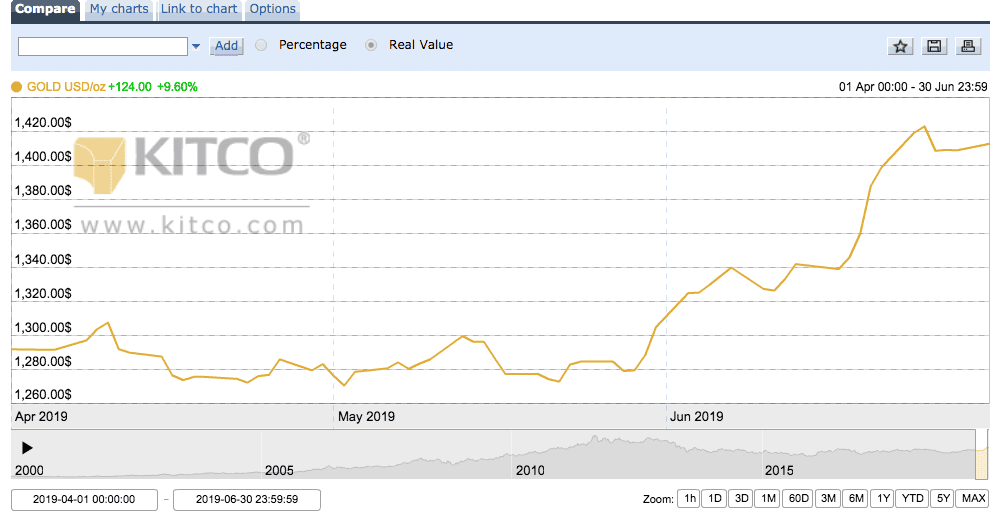 Gold saw its highest closing price of Q2 on June 25, when it traded at US$1,423. The metal climbed to an over six year high as safe haven demand returned after tensions between the US and Iran intensified.

The precious metal hit its lowest point a month into the second quarter on May 2, when it touched a four month low and traded at US$1,270.40. Despite the dip, the metal still managed to perform better throughout Q2 than it did in Q1, when the highest level it could achieve was US$1,320.70.

As the third quarter of the year begins, investors interested in the gold market should be aware of a number of factors that could impact the precious metal’s price.

Most analysts and market watchers have noted that the greenback’s movements, ongoing geopolitical tensions, a slowdown in economic growth and a potential interest rate cut from the Fed will continue to drive the price of gold for the remainder of 2019.

With the US dollar being largely stagnant for a noticeable portion of the second quarter, bullion became more ideal for investors to hold.

“The US dollar, we think, is … in a long-term downtrend — it’s going to start going down again,” Chantelle Schieven, research head at Murenbeeld & Co, told the Investing News Network (INN).

Many market watchers share Schieven’s sentiment, as geopolitical concerns that became prominent during the first quarter of the year have not only continued into Q2, but have intensified, keeping the greenback from climbing to levels seen in previous quarters.

Towards the end of the second quarter, the United States not only maintained ongoing tensions with China, but also created them with Iran and Mexico, as US President Donald Trump threatened to enact sanctions on both countries.

“For Q2, geopolitical events, namely the US-Iran conflict, pushed gold past the US$1,400 price level to a six year high. This, coupled with slower economic growth (i.e. weak jobs report for May), led to easier monetary policy expectations, which will help support gold around US$1,400,” Schieven added.

As Schieven pointed out, on top of a down dollar, both the US and other powerhouse countries experienced less-than-thriving economies during the second quarter, boosting the precious metals.

Gold climbed over US$1,350 in mid-June when data revealed that China’s industrial output growth slowed to a more than 17 year low of 5 percent in May.

“In people’s minds there is a sense of a deeply darkening macroeconomic backdrop,” said Ross Norman of Sharps Pixley.

These concerns could not be expunged and acted as a catalyst for boosting the yellow metal, particularly in the second half of Q2.

“Gold prices continued to rise through June on higher safe haven demand, amid disappointing global macroeconomic data and heightened trade tensions between the US and China,” said panelists quoted in the latest report from FocusEconomics.

These issues did not go unnoticed by the Fed, and during its last meeting in June, the central bank not only maintained its previous decision to not increase interest rates, but also alluded to cutting them as early as the beginning of Q3.

“Even though the Fed didn’t cut rates, the market expectation for a dovish environment and a likely rate cut in July are positive for gold,” Maxwell Gold, the New York-based director of investment strategy at Aberdeen Standard Investments, told Bloomberg.

Brian Leni, founder of Junior Stock Review, told INN, “Given (the Fed’s) stance (on June 19), the second half of the year looks to be really interesting for gold and the global market on a whole.”

As mentioned, the yellow metal hit a near six month high on the back of the Fed’s dovish tone and through support from a basket of geopolitical issues that negatively affected the market and therefore the US dollar.

With several industry insiders predicting that gold will continue this upward trend next quarter, the real questions then become by how much and which factors will be driving it.

“Geopolitical uncertainty and a less favorable growth environment should continue to support safe haven demand. Our panel sees gold prices rising through 2020 and averaging US$1,392 in Q4.”

Meanwhile, Schieven believes that the support the yellow metal found during the second quarter of the year will continue on into Q3.

“The technical outlook for gold looks positive since it broke out of its multi-year range. If the Fed signals that it will not be as accommodative (cut rates by as many times) as the market current expects at its end of July meeting, we could see a small pullback in the gold price,” she noted.

“The US administration is likely to put additional pressure on the US dollar to decline in the second half of this year. This, along with continued geopolitical tensions and low interest rates, will keep the gold price buoyant,” she continued.

Finally, Andrew O’Donnell, managing director of Super Charged Stocks, told INN that he has always been long on gold and believes that the price should be even higher than where it currently stands. He suggested that investors pay attention to the actions of major players in the gold space, such as central banks, in order to get a sense of where the yellow metal is headed.

“I’m a big fan of, you don’t necessarily have to listen to what people say, but you’ll look to see what actual players are doing,” O’Donnell noted. “If you see these central banks buying tons of gold, you’ll go, ‘Ah, I don’t care what they tell me — they’re doing this, so if they are buying gold, they’re concerned.’”

That being said, O’Donnell also acknowledged that the current economic and geopolitical landscape is not great and will continue to support the precious metal. In terms of pricing, he told INN that he thinks US$1,500 for gold this year is a “safe bet.”

Finding some balance, FocusEconomics panelists estimate that the average gold price for Q3 2019 will be US$1,363. The most bullish forecast for the quarter comes from BayernLB, which is calling for a price of US$1,500; meanwhile, Euromonitor is the most bearish, with a forecast of US$1,283.