Interested in historical changes in gold prices? We take a look at the yellow metal’s past performance and what it could mean for the future.

Gold has always been susceptible to economic and geopolitical changes, and it is important for investors to learn about the precious metal’s movement in the past to better understand how it will react in the present and future.

By examining the history of the gold price, investors may be able to identify areas of price support, obtain a better sense of when may be a good time for investing in gold and define the elements that move the yellow metal’s price.

Below the Investing News Network discusses the importance of looking at the historical price of gold, what the recent trends in gold are and what the past may be able to tell us about the metal’s outlook.

Historical changes in gold prices: Past

In order to understand the present, it is important to go back and evaluate what happened in the past — and this is no different when looking at gold.

While physical gold has been around since 30 BC, when the Roman Empire declared that the price of gold would be set at 45 coins per pound, people did not begin using the yellow metal as a source of currency until 364 BC. Prices would not change until the 211 to 217 AD time period, when the value of gold rose to 50 coins per pound.

A major jump for gold came in 306 AD, when Constantine the Great valued the precious metal at 70 coins per pound in order to finance the military. This was also a period of time when taxes were increased and the first signs of hyperinflation in the economy became apparent.

Jumping ahead to a more pertinent historical time period in gold’s history, it is important to examine the monetary policy of Britain and the US.

Both the price of US$20.69 and the gold standard remained in play until 1933, and were relevant factors in the Great Depression of 1929, which began after the US Federal Reserve raised interest rates in 1928 and the stock market crashed in 1929. After that, investors flocked to gold as a safe haven, trading in their paper currency for the yellow metal.

This caused the Fed to continually raise interest rates in fear that the country might run out of gold. In turn, the value of the US dollar increased, pointing to the beginning of the end of the gold standard.

The US in particular decided to make the move away from gold because the country was facing both mounting unemployment and spiraling deflation.

In the early 1930s, the US government was unable to stimulate the economy and believed that it needed to deter people from cashing in deposits and depleting the gold supply. In order to rectify the damage done by surging interest rates, in 1933, US President Franklin D. Roosevelt cut the US dollar’s ties with gold, allowing the government to pump money into the economy while lowering interest rates.

Two other key years that are important to historical gold prices are 1971 and 1976. In 1971, US President Richard Nixon stopped foreign central banks from being able to exchange their dollars for US gold. This move wiped the dollar off of the gold standard entirely and was Nixon’s attempt to fix an economy that was suffering from a combination of inflation and recession.

By 1976, free from the US dollar, the yellow metal made its largest gain up to that point, surging to US$120 in the open market.

By the time 1980 rolled around, traders had bid the price of gold up until it reached US$594.92, using it as a hedge against double-digit inflation. Heightened interest rates and an increase in inflation caused another recession, and, eventually, precious metals lost value within the open market.

For gold, that meant its price remained around US$410 until the mid-1990s, when it drastically dipped again to around US$288 thanks to steady economic growth. 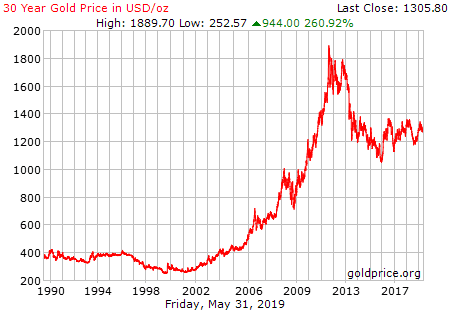 At this point in time, the trend of gold as a safe haven became increasingly apparent, as the metal shot up to US$869.75 during the 2008 financial crisis and hit an all-time high of US$1,895 on September 5, 2011, because investors were deeply concerned that the US would default on its debt.

Since then, the price of gold has been on a steady decline, but its historical roots are an important road map to current price trends and what makes sense for investors when buying gold.

There are many factors that can shift gold prices today. Currently supply and demand, inflation, interest rates and geopolitical circumstances are dominating what happens to the precious metal.

While supply and demand are not mentioned as frequently when discussing current price trends for gold, they still play a part. Demand tends to push the price of gold up when supply is threatened. This is why investors who believe that we’ve reached peak gold tend to be interested in the yellow metal — they worry that there is no more new gold to be discovered and thus supply is threatened.

On the other hand, when investor demand is low due to lackluster prices, such as what was seen throughout most of 2018 and the beginning of 2019, the metal is pushed down even further. This lack of interest has caused the yellow metal’s price to dip and stagnate in the last one and a half years.

These factors can be grouped together because they have the ability to affect the greenback’s value, which then causes the yellow metal’s price to fluctuate. All three of these factors also tie into gold’s role as a safe haven asset during times of volatility.

What we have seen in the last year and half is a cycle of inflation, which has caused the Fed to hike interest rates; that in turn has sent the US dollar into a downward motion, resulting in rising gold prices. This is an example of investors turning to gold when the economy is in turmoil.

Also moving the price of gold are geopolitical issues such as trade war tensions. This is another circumstance where the yellow metal’s safe haven nature makes it appealing as an investment. Political turbulence that spans across the globe tends to shake the market and bring the value of the US dollar down. As a reaction to this, individuals turn to gold as a safety net. Investors buy gold in forms such as gold exchange-traded funds, as well as gold coins, gold bars and other bullion products, to name a few. This reaction moves the yellow metal up the price chart.

Finally, the value of the US dollar has spiked in the last two years and has shown little signs of slowing down. Even when elements such as interest rates and political and economic downturns hit, the market price of the precious metal has not made significant gains because the greenback loses very little value when it faces upset. As it stands, the US dollar can’t be kept down, which does not bode well for gold.

What historical changes in gold prices show about the future is that prices are cyclical. While the factors that affected the metal during the Roman Empire are not what change the spot price of gold today, history shows there will always be market fluctuations. Further, by looking at gold prices today, investors can get a sense of what conditions are needed for it to thrive and what circumstances make it drop.

If you are looking to invest in gold, be diligent in determining what the market looks like and how both the metal and the greenback react in response. Keep in mind that history has a way of repeating itself.

When Will Gold Go Up?
When Will Silver Go Up?
Metals Weekly Round-Up: Headwinds Weigh on Price Momentum
Trump and the Gold Standard