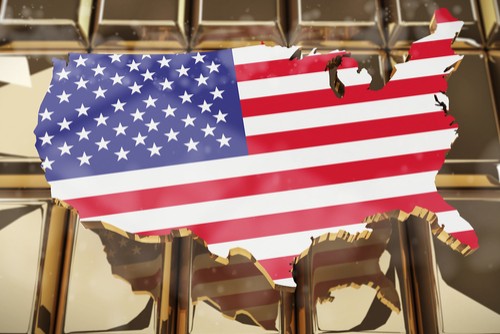 US President Donald Trump has praised the gold standard in the past, but could he really bring it back? We look at whether it’s possible.

The gold standard hasn’t been used in the US since the 1970s, but in the last several years there’s been some speculation that US President Donald Trump could bring it back.

Rumors that the gold standard could return center largely on positive comments Trump has made. The president has said it would be “wonderful” to bring it back, and a number of his advisors think so too — Judy Shelton, John Allison and others have also expressed support for the idea.

But could the US really return to the gold standard? And what would would it mean if Trump brought it back? Read on to learn what the gold standard is, how it works, why it ended, what Trump has said about bringing it back and what could happen if he made that happen. Plus, take our poll to let us know whether you think it could happen.

What is the gold standard?

What is the gold standard and how does it work?

For example, if the US went back to the gold standard and set the price of gold at US$500 per ounce, the value of the dollar would be 1/500th of an ounce of gold. This would offer reliable price stability.

By introducing the gold standard, transactions no longer have to be done with heavy gold bullion or coins. It also increases the trust needed for successful global trade ― the idea is that paper currency has value that is tied to something real.

The goal of this type of monetary policy is to prevent inflation as well as deflation, and to help promote a stable monetary environment.

When was the gold standard introduced?

The gold standard was first introduced in Germany in 1871, and by 1900 most developed nations, including the US, were using it. The system remained popular for decades, with governments worldwide working together to make it successful, but when World War I broke out the system became difficult to maintain. Changing political alliances, higher debt and other factors led to a widespread lack of confidence in the gold standard.

When was the gold standard replaced and what replaced it?

The demise of the gold standard began as World War II was coming to an end. At this time, the leading western powers met to develop the Bretton Woods agreement, which would be the framework for the global currency markets until 1971.

The Bretton Woods agreement was developed at the United Nations Monetary and Financial Conference, held in Bretton Woods, New Hampshire, from July 1 to 22, 1944. Under the agreement, currencies were pegged to the price of gold, and the US dollar was seen as a reserve currency linked to the price of gold. This meant that all national currencies were valued in relation to the US dollar since it had become a dominant reserve currency.

Despite valiant efforts from governments at the time, the Bretton Woods agreement led to overvaluation of the US dollar, which led to concerns over exchange rates and their ties to the price of gold.

By 1971, Nixon had called for a temporary suspension of the dollar’s convertibility. Countries were then free to choose any exchange agreement, except the price of gold. In 1973, foreign governments let currencies float; this put an end to the Bretton Woods system, and the gold standard was ousted.

From the 1970s to today, most countries have run on a system of fiat money, which is money issued by the government that is not backed by a commodity. The value of money is set by supply and demand for paper money and supply and demand for other goods and services in the economy. The prices for those goods and services, including gold and silver, can fluctuate based on market conditions.

What has Trump said about the gold standard?

While it’s perhaps not common knowledge, Trump has long been a fan of gold. In fact, as Sean Williams of the Motley Fool points out, Trump has been interested in gold since at least the 1970s, when private ownership of gold bullion became legal again. He reportedly invested in gold aggressively at that time, buying the precious metal at about US$185 and selling it between US$780 and US$790.

Since then, Trump has specifically praised the gold standard. In an oft-quoted 2015 GQ interview that covers topics from marijuana to man buns, Trump said, “Bringing back the gold standard would be very hard to do, but boy, would it be wonderful. We’d have a standard on which to base our money.” In a separate interview from the same year, he said, “We used to have a very, very solid country because it was based on a gold standard.”

According to Politico’s Danny Vinik, “(Trump has) surrounded himself with a number of advisors who hold extreme, even fringe ideas about monetary policy. … At least six … have spoken favorably about the gold standard.” Shelton and Allison, mentioned above, are just a few of them. Others include Ben Carson and David Malpass. The last two — Rebekah and Robert Mercer — have distanced themselves from Trump’s campaign in recent months, but had strong influence on him before that.

Emphasizing how unusual the support for the international gold standard around Trump is, Joseph Gagnon, a senior fellow at the Peterson Institute for International Economics, told the news outlet, “(It) seems like nothing that’s happened since the Great Depression.” Gagnon, who has also worked for the US Federal Reserve, added, “You have to go back to Herbert Hoover.”

Politico also quotes libertarian pundit Ron Paul, another supporter of the gold standard, as saying, “We’re in a better position than we’ve ever been in my lifetime as far as talking about serious changes to the monetary system and talking about gold.”

Aside from the company he keeps, newsletter writer Jay Taylor points out that Trump’s tariffs and Iranian sanctions could have been motivated by an attempt to reduce the trade deficit and in effect claw back the dollar to US soil. Whether or not it’s working is in question, but Taylor points out that Trump’s efforts on money supply would be more effective if the gold standard was restored.

What would it take to return to the gold standard?

The consensus seems to be that despite Trump’s apparent positivity, a return to the gold standard is highly unlikely. For the most part, even the most ardent supporters of the gold standard recognize that going back to it could create trouble. As The Motley Fool’s Williams explains, by and large economists agree that moving to a lower-key version of the gold standard in 1933 was “a big reason why the US emerged from the Great Depression,” and a return would be a mistake.

But if Trump did decide to go through with it, what would it take? According to Kimberly Amadeo at TheBalance, due to trade, money supply and the global economy, the rest of the world would need to go back to the gold standard as well. Why? Because otherwise the countries that use the US dollar could stand with their hands out asking for their dollars to be exchanged for gold — including debtors like China and Japan, to which the US owes a large chunk of its US$21.6 trillion national debt.

That wouldn’t be too big of an issue if it weren’t for the fact that the US doesn’t have enough gold in its reserves to pay it all back. So for Trump to unilaterally return the US to the gold standard, the US would have to exponentially replenish its gold reserves in advance.

In addition, Money Morning’s David Zeiler suggests that returning to the gold standard would require the price of gold to be set much higher than it is currently. “West Shore Group Chief Global Strategist Jim Rickards has calculated the gold price would jump up to US$10,000 an ounce,” he comments.

That means the US dollar would be “severely devalued,” causing inflation, and since global trade relies on the US dollar as a reserve currency, trade would “grind to a halt.” Conversely, returning to the gold standard and keeping the gold price low would cause deflation.

What would happen if the US returned to the gold standard?

Going back to the gold standard would have a huge impact on the US economy. For one thing, it would make it impossible for the Fed to offer fiscal stimulus. After all, if the US had to have enough gold reserves to exchange for dollars on an as-needed basis, the Fed’s ability to print paper currency would be incredibly limited.

Supporters believe that could be the perfect way to get the US out of debt, but it could also cause problems during times of economic crisis. It’s important to remember that, because 68 percent of the US economy is based on consumer spending, if inflation rose due to the gold price rising, then a lot of consumers would cut spending. That would then affect the stock market as well, which could very well lead to a recession or worse without the ability of the government to soften that blow via money supply.

That means that a return to the gold standard would also expose the US economy to the yellow metal’s sometimes dramatic fluctuations — while some think that gold would offer greater price stability, it’s been volatile in the past. If we look back further than the stability of late, we can see that it dropped steeply from 2011 to 2016.

As can be seen, returning to the gold standard would be a complex ordeal with many pros and cons associated. What do you think about the idea? Do you think Trump should bring back the gold standard? Let us know in the comments or by taking the poll below.

12 responses to “Will Trump Bring Back the Gold Standard?”