What happened to gold in Q1 2019? Our gold price update outlines key market developments and explores what could happen moving forward.

While gold rallied from the lows seen throughout most of 2018, the yellow metal only managed to make slight gains during the first quarter of 2019, climbing just under 1 percent.

A softer US dollar, geopolitical issues and a slow in economic growth were the main catalysts behind the precious metal’s ability to stay above US$1,250 per ounce throughout the quarter. Additionally, investors regained interest in the metal as a safe haven and after the US Federal Reserve paused rate hikes.

Despite gold’s reaction to these factors, prices remain in murky territory. However, many industry insiders believe that gold is prime to rise and sustain US$1,300 and above.

Read on for an overview of the factors that impacted the gold market in Q1, plus a look at what investors should watch out for in the months to come.

The price of gold ticked up 0.85 percent in Q1. As the chart below from Kitco shows, gold experienced both ups and downs throughout the period, but reached its highest level at the end of January. 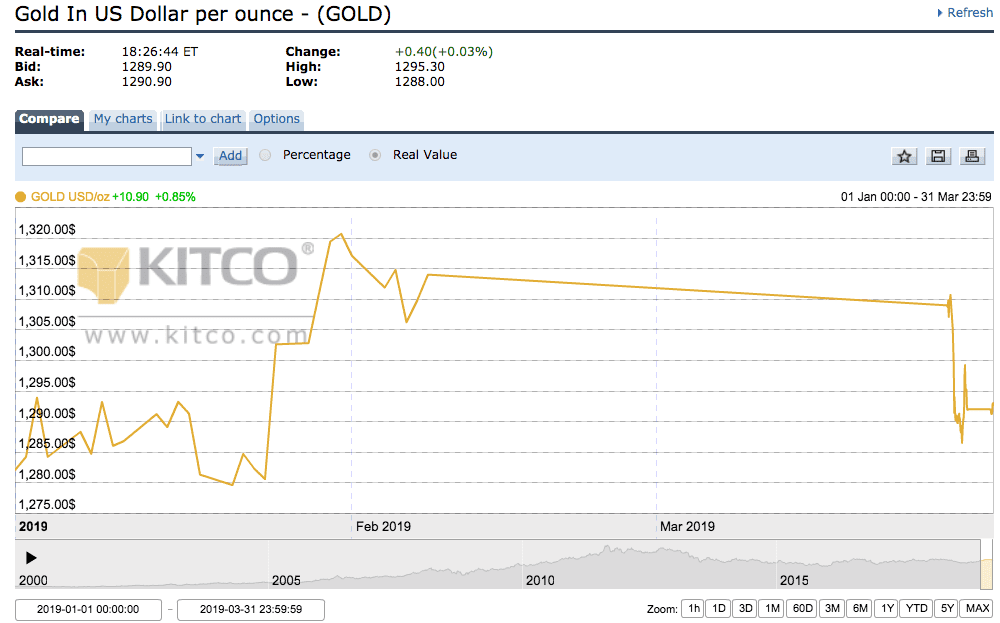 Gold hit its highest point of the quarter on January 31, when it traded at US$1,320.70. The metal climbed to a nine month high as the greenback retreated following the Fed’s announcement that it will be pausing its monetary tightening cycle.

As a result, the first quarter of the year saw investor interest begin to return to gold.

The precious metal hit its lowest point 10 days prior to its largest increase. On January 21, gold sank thanks to a rallying US dollar and greater risk appetite outweighing support from the expected pause in interest rate hikes from the Fed.

As the second quarter of the year begins, investors interested in the gold market should be aware of a number of factors that could impact the precious metal’s price.

Most analysts and market watchers have noted that the greenback’s movements, a slowdown in economic growth and geopolitical tensions will continue to drive gold for the remainder of 2019.

With the US dollar’s rally losing steam throughout the majority of the first quarter, bullion became more ideal for investors to hold.

“The US dollar, we think, is going to start its long-term downtrend,” Chantelle Schieven, research head at Murenbeeld & Co., told the Investing News Network (INN) in an interview at the Prospectors & Developers Association of Canada (PDAC) convention.

However, for some industry experts, the greenback needs to cool even further. They believe that the dollar did not face enough pressure, and therefore the yellow metal was only able to climb marginally in the first quarter of 2019.

Alain Corbani, head of commodities at Finance SA, told INN at PDAC, “[We] have a perfect environment for a higher gold price now — the only missing ingredient in that equation that would trigger gold to a higher level is the US currency.”

Both the US and other powerhouse countries also experienced less-than-thriving economies during the first quarter, boosting demand for precious metals.

Gold climbed at the beginning of March when the European Central Bank cut its growth outlook and China reported weak data.

“There are still concerns about the China economy especially when the global demand is weakening and we don’t see a silver lining of immediate recovery in the eurozone as well,” Margaret Yang, market analyst with CMC Markets, Singapore, told Reuters in early March.

These concerns, which could not be expunged, acted as a catalyst for boosting the yellow metal for a period of time during Q1 and may move to the forefront during the next quarter.

Additionally, thanks in part to the slowdown in global economic growth, the Fed revealed that it no longer feels the need to offset inflation with restrictive monetary policy.

“Growth of economic activity has slowed from its solid rate in the fourth quarter,” the US Federal Reserve stated when it paused interest rate hikes in March.

Finally, a variety of geopolitical concerns stirred up the yellow metal during Q1.

One of the longstanding geopolitical concerns to make several appearances during Q1 was the ongoing dispute between the US and China, as the threat of a trade war between the powerful countries continues to loom.

Unlike previous quarters, the trade talks between the US and China both pushed and pulled the metal. Although there were, and continue to be, disputes between the regions, the quarter also introduced civil conversations between US President Donald Trump and Chinese President Xi Jinping.

“If there is real progress on the trade talks, that could hurt gold,” Michael McCarthy, chief markets strategist at CMC Markets (LSE:CMCX), said after a positive two day US-China meeting at the end of January.

McCarthy was correct, as the markets showed a dip for gold following the talks.

A secondary geopolitical concern came in the form of ongoing Brexit turmoil, which carried on from the end of Q4 2018 into the first quarter of this year.

“The issues around Brexit have invigorated a little bit of safe haven buying in the market,” said ANZ (ASX:ANZ) analyst Daniel Hynes.

Although Brexit seems like a purely European problem, it has demonstrated more than once that it has the ability to upset global markets, and, because of that, the US dollar generally takes a hit. As investors began to regain faith in gold in Q1, Brexit acted as another push in that direction.

As with many predictions made at the end of Q4 2018, several industry insiders foresee gold continuing to rebound next quarter. However, some precious metals experts are more optimistic than others when it comes to how high the yellow metal will climb in Q2 and beyond.

“The panel is relatively split over price movements this year, with a slight bullish bias,” FocusEconomics noted in its recent commodities consensus forecast report. “FocusEconomics analysts see gold prices making slight gains this year and averaging US$1,331 per troy ounce in Q2.”

CPM Group’s (HKEX:1932) Jeffrey Christian also believes that the yellow metal’s rise will continue, but no big jumps will be made in the second quarter or for the remainder of 2019.

He also believes that gold’s biggest rise will most likely happen just before 2021, stating, “I think at that point you could see investors interested in a lot more gold.”

Meanwhile, Schieven said that the yellow metal could experience an average of around US$1,330, adding, “We do think that there is over a 40 percent probability that gold will break US$1,400 in the second half of the year.”

Similarly, Brian Leni, founder of the Junior Stock Review, told INN that he feels positive about the yellow metal this year. “I remain bullish on precious metals, specifically gold, as I believe we’re in for continued volatility in 2019.”

For Day, Trump will be the secret to gold’s success in the not-so-distant future. Day noted that the negative effects of Trump’s presidency will eventually come to a head and slash the value of the greenback.

“If Congress starts impeachment proceedings, that’s going to be very negative for the dollar and therefore positive for gold … As you know, there’s a lot of Congress people who are already talking about impeachment, so I think that is something to really watch.”

Finally, EB Tucker gave INN the largest gold price expectation at PDAC. “I went out and made a big call in December that gold would hit US$1,500 this year. I’m standing by that call.”

Finding some balance, FocusEconomics panelists estimate that the average gold price for Q2 2019 will be US$1,300. The most bullish forecast for the quarter comes from RBC Capital Markets (TSX:RY,NYSE:RY), which is calling for a price of US$1,356; meanwhile, Deutsche Bank (NYSE:DB,ETR:DBK) is the most bearish, with a forecast of US$1,230.