Driven by strong investment demand, silver reached the second-highest average price on record in 2012. But the average price in 2013 will likely be lower. 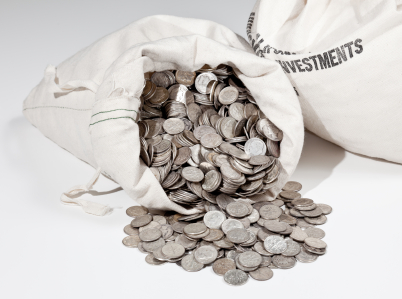 Thomson Reuters GFMS has completed the World Silver Survey 2013 for the Silver Institute. The report reveals that 2012 was a year during which silver supply continued to grow, silver investment demand remained strong and silver’s average price reached $31.15, the second highest on record. Though silver prices are expected to rise above current levels, GFMS expects a lower average price in 2013.

With over 1.05 billion ounces (Moz) produced, 2012 was the 10th consecutive year of rising silver supply.

“Silver scrap supply remains high,” said Neil Meader, head of precious metals research and forecasts at GFMS, during the presentation for the release of the report.

Despite a 2-percent drop, scrap represented about 24 percent of total silver supply in 2012. India and Germany were areas where there was significant scrap activity.

Mine supply increased 4 percent, or by about 30 Moz, to 787 Moz. Lead and zinc mining continued to be the top sources of silver, followed by gold mining. Primary silver mine supply, which only rose about 1 percent, represented about 28 percent of total mine output.

Most of the increase in mining production was due to metal from Mexico, Russia and China, which climbed to become the world’s second-largest silver producer.

The average cash cost for silver production rose to $8.88 per ounce. This increase was largely driven by the drop in by-product credits, lower grades and higher input costs, such as labor, electricity and maintenance.

Meader said substitution and thrifting, trends that were widespread across the industrial space, cannot be ignored. However, he also noted that many areas remain in which silver is irreplaceable and users cannot get out of using the metal.

Structural declines in the silverware and photography segments continued. Photography now only accounts for about 7 percent of demand, according to Meader, and improvement is not expected as the shift to digital imaging looks set to continue.

Investors consumed about 253 Moz of silver in 2012, accounting for almost a quarter of total demand. That figure represents approximately $8 billion on a net basis, a figure that is substantially higher than the annual average of $1.2 billion over the 2001 to 2010 time frame, GFMS said.

Looking into 2012′s silver investment trends reveals that there was a substantial drop in coin demand. Meader said the weakness was seen in many countries, but most notably in North America. Still, coin and medal investment, at nearly 93 Moz, reached the third-highest level ever recorded.

These comparatively weak numbers for physical silver investment are in contrast to the robust appetite displayed by ETF investors. Demand for these products grew by about 55 Moz last year, hitting a historic high of over 634 Moz.

Silver supply is expected to increase further in 2013, perhaps by about 4 to 5 percent. GFMS is looking for gold mining to be a notable contributor to this growth.

GFMS also expects industrial demand to hit a three-year high in 2013 as the global economy stabilizes and likely improves. “Stock replenishment could give a decent bounce,” Meader said.

Still, fabrication demand is not expected to come close to consuming the available supply of metal. The silver surplus grew wider in 2012 and is expected to widen further this year, leaving investors to mop up the surplus.

“So, are investors up the challenge?” Meader asked.

He admitted that a year ago, GFMS was looking for $2,000 gold and $50 silver. The firm has “wound back” that outlook due to structural changes that make those optimistic numbers “clearly out of the question.”

Meader pointed to a number of factors that could make for a softer market this year. These include investment satiation in places like Germany and China, constrained involvement of the more mainstream players and weaker gold prices. There are also no signs that the Eurozone will fracture, which is lending confidence to investors, he said.

“Clearly what’s happened with that significant correction has changed things,” Meader said, referring to the recent steep decline in prices. “Not only are we starting from a lower base, but clearly the reputation of gold — and by consequence silver — as a safe haven has taken something of a battering.”

“With a growing notional surplus, that does present a problem,” he said.

However, he pointed to issues that could support the silver price. The US budget and deficit problems are not resolved, and a US credit rating downgrade could be very significant, he said. The industrialized world continues to have economic problems, and the possibility of inflation exists.

“Though we have not seen inflation as a problem yet, that does not mean that it is not going to happen,” said Meader. But he added that he does not expect it to be a 2013 phenomenon.

Meader said that the silver selling that has occurred was the aggressive action of a small number of people and does not represent the broader view. On the contrary, a strong response from the physical market has provided a floor for silver.

Price remains a significant driver, especially with regards to India and China, Meader noted. But after a period of consolidation, once the supporting factors start to shine through, GFMS sees upside potential for silver.

In the second half of the year, there may be a significant rally that drives prices above $30 and perhaps up around $32, Meader said. That would result in an average price of probably a little under $29, he concluded.

Silver prices have been volatile recently. After falling to sub-$23 levels early last week, the metal gained momentum, breaking above $24 at the end of the week. Silver, last at $24.23 on Monday, continues to remain above that level.

Securities Disclosure: I, Michelle Smith, hold no direct investment interest in any company mentioned in this article.