In 2020, the gold price reached a new all-time high. Here’s a recap of the major gold trends of the year quarter by quarter.

2020 has been a remarkable year, to the say the least. Gold hit its lowest point of the 12 month period in March on the back of widespread volatility related to COVID-19, but later benefited from deep uncertainty when it reached an all-time high in August.

The coronavirus and its pervasive effects across worldwide markets prolonged safe haven demand for the yellow metal, driving its ascent to US$2,063 per ounce. The US election, global stimulus initiatives and currency devaluation were also catalysts for the move.

Gold’s August threshold ultimately proved unsustainable, and the yellow metal fell below US$2,000 shortly after. Holding at around US$1,970 in early September, its price has been declining since.

Now trading in the US$1,820 range, gold appears to have found a floor at about US$1,800. If its Q4 pullback holds, the yellow metal will finish the year roughly 17 percent higher than it was in January, similar to the percentage uptick that it saw in 2019.

News that several pharmaceutical companies are getting close to mass rollouts of COVID-19 vaccines has added headwinds for the safe haven metal, although long-term fundamentals look promising.

“The gold market will move up and down as all markets do, but in my view we are unfortunately headed toward higher gold prices,” said Junior Stock Review’s Brian Leni.

“My guess is that we have only seen the tip of the iceberg in terms of quantitative easing (QE), and I think that it is entirely possible that we see negative real rates in the future — truly frightening.”

As many analysts have remarked this year, COVID-19 may have been the catalyst for recent market woes, but the environment for higher prices has been shaping up for several years.

The year started with gold trading for US$1,552.30. Pre-COVID-19 activity was largely the result of tenuous geopolitical relations between the US and Iran, as well as tough trade negotiations with China.

By mid-February, gold had spiked above US$1,600 as cases of COVID-19 began to emerge.

On March 6, gold hit a seven year high of US$1,673.10 as nations around the globe began planning lockdowns to combat the spread of the coronavirus.

Mid-March saw panic set into the market, with margin calls leading to a massive selloff.

The S&P/TSX Composite Index (INDEXTSI:OSPTX) exhibited its worst showing in 80 years in mid-March, while the Dow Jones Industrial Average (INDEXDJX:.DJI) recorded its poorest day since October 1987, falling 37 percent. Gold also slumped, falling to a six month low of US$1,498.80.

Market chaos and shutdowns spurred government spending and stimulus globally. Leni believes people have become used to these efforts and thinks they have likely run their course in terms of usefulness.

“The global financial system was first shocked by the credit crisis in 2008,” said Leni, explaining that central banks responded with excessive QE and “ultra-low interest rates.”

“These forms of stimulus have enabled the world economies to stay afloat over the last 10 years, but in my view, it was only ever a matter of time before we saw major issues arise once again,” he added. “COVID-19 was the straw that broke the camel’s back, as they say.”

Gold’s fall below US$1,500 was brief, and a rush to the safe haven asset class propelled the metal above US$1,600 by month’s end.

“When you look around the world, of all of the asset classes of all of the markets, gold to me does have the best risk/reward in the current environment, so I would certainly recommend a pretty high allocation for all investors,” Adrian Day of Adrian Day Asset Management said during a March interview.

The three month period saw ETF inflows climb by 434.1 tonnes, and the first six months of the year brought record growth in the ETF space — more than 733.9 tonnes worth US$40 billion were added. 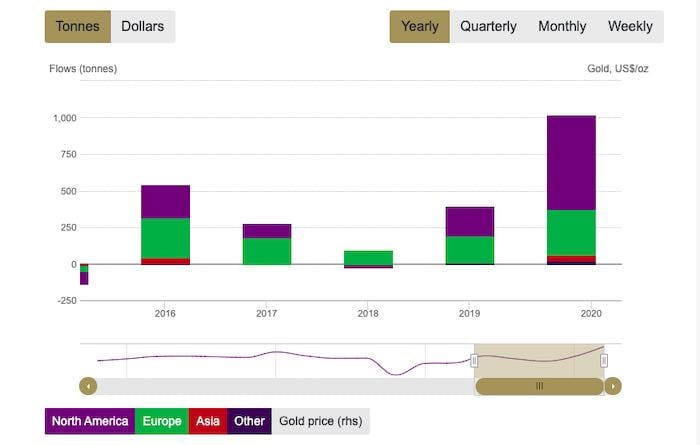 “I would say first, with the economic and geopolitical uncertainty, lofty stock valuations and low-rate environment, there’s certainly been drivers for investment demand, and that clearly led some new investors into the space,” Adam Perlaky, researcher at the World Gold Council, told INN in June.

“But I also think the growth in the number of funds globally has also given access to additional investors.”

Increased access has led to the most successful year in ETF history. To date, the gold ETF space has seen inflows of 1,022 tonnes, 376 tonnes more than the previous record 2009 record of 646 tonnes.

In Q2, the impact of Q1 shutdowns began to have an impact on gold production.

“The COVID-19 pandemic resulted in several major gold-producing countries enacting lockdowns that required mines to temporarily halt operations,” said Adam Webb, director of mine supply at Metals Focus. “Most of these began being implemented from mid-March, with the final nationwide lockdowns affecting mining lifted by the end of May.”

Webb noted that gold production was most significantly impacted in Peru, South Africa, Mexico and China. Canada also experienced dislocation but it varied by province.

“Outbreaks at individual mines and local communities have continued to cause problems at some operations; however, disruption has eased in the second half of the year,” he said. “As a result, we are expecting annual global gold production to fall by 4.6 percent year-on-year in 2020.”

July saw gold sitting in the US$1,774 range before a rally set in mid-month. Pushed higher by a tanking US dollar, the yellow metal reached US$2,063 in early August. The greenback simultaneously sank to a two year low at the time, forced lower by inflationary tones.

“(COVID-19-related) financial destruction has enabled governments and central banks to again flood the financial system with QE,” said Leni. “In particular, the US is leading the way, printing more money in March, April and May than they did in the years following the 2008 credit crisis — scary.”

Adding 32 percent to its value between January and mid-August, gold’s new highs prompted speculation that the price could climb even higher in the near term.

“The COVID-19 pandemic has created enormous global stresses which are accelerating the need for gold to go into the US$2,000, US$3,000 range,” said Kaiser Research’s John Kaiser.

“I wasn’t really expecting it to break through until 2021, but I think we’re on the threshold. It seems to be paused right now, sort of waiting … but I think once it does (break through) then it’ll move around back and forth between US$2,000, US$3,000.”

Unable to maintain its all-time high, gold fell back below US$1,950 by mid-August. A stronger US dollar, rising equities and the potential for another round of stimulus in the US all weighed on gold’s ascent.

Starting the period in the US$1,898 range, the price continuously fell lower through October and was holding at the US$1,895 level by month’s end.

A minor spike moved gold to US$1,949 ahead of the US election as speculation around whether Republican Donald Trump or Democrat Joe Biden would be better for gold reached a fever pitch. Some analysts noted that either way there would be a long road to economic recovery post-pandemic.

“I think (the price) would stay about the same. I mean, bottom line, the amount of money that’s being pumped into the system, in the trillions of dollars and the push towards inflation, those things aren’t going to change regardless of who’s in charge,” Brent Cook of Exploration Insights told INN in October.

“I think probably more impactful for the gold price is going to be when and if a (COVID-19) vaccine becomes widely available, which starts kicking the US economy back into gear.”

Cook’s prediction was correct. A mid-November announcement from Pfizer (NYSE:PFE) regarding its vaccine sent gold lower. From November 13 to the end of the month, gold shed 5.4 percent.

“The impact (of a vaccine) may actually be negative for a quarter or two as there will be less of a demand for stimulus initially,” he said. “This will of course be short term as governments do everything in their power to inflate away debt, but for the next quarter or two there may be a continued consolidation in the gold price before the next leg higher.”

A US$908 billion dollar stimulus proposal made headlines in early December, the same day that Biden urged lawmakers to agree on a deal before January.

“Right now, the full Congress should come together and pass a robust package for relief to address these urgent needs,” said the president elect.

How much stimulus and who should get it has become a hot-button issue during the final days of  the Trump presidency. A group of bipartisan senators proposed the US$908 billion cash infusion, while Senator Mitch McConnell noted he is discussing a smaller new proposal with Trump staffers.

Stalled stimulus and spiking COVID-19 cases in the US pushed gold higher for the first days of December as the price edged back above US$1,800.

BRAND NEW! Take Advantage Of Silver On The Rise Before It's Too Late

Everything You Need To Watch The Dollars Come Pouring In!