Here’s an overview of the main factors that impacted the copper market in Q2 2021, and what’s ahead for the rest of the year.

Copper prices reached an all-time high during the second quarter of the year, trading above US$10,700 per tonne for the first time ever.

The price rally picked up pace during the first few weeks of the period, although the red metal could not maintain that level throughout the quarter, finishing around the US$9,000 mark.

As expectations of higher demand increased due to the reopening of economies around the world, so did prices for copper, which gained 7 percent in Q2. 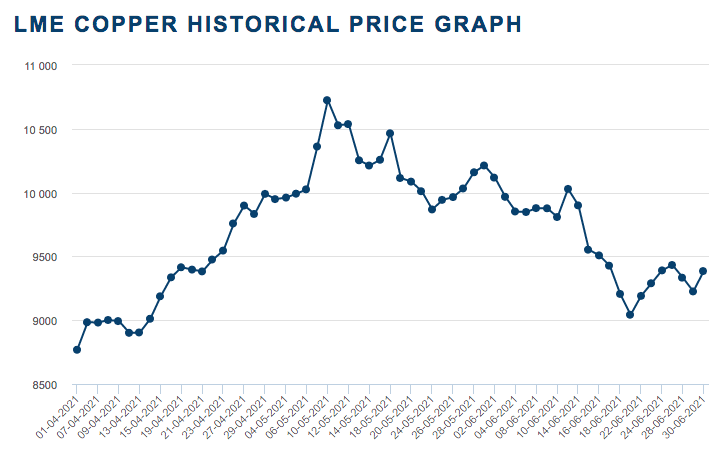 Copper started the second quarter of the year at U$8,768 following a Q1 rally that saw the metal reach its highest level in more than a decade. Even though the metal did not finish trading at the five digit level in Q2, it hit an all time-high in early May, when it was changing hands for U$10,724.50.

“From the perspective of the 2020 March low of less than US$5,000, the extent of the rally in the copper price did surprise to the upside,” Robert Edwards of CRU Group told INN.

The red metal fell for the rest of the three month period, closing at US$9,382 on the last day of trading in the second quarter.

For Karen Norton of Refinitiv, copper prices have pre-empted, as they have in the past, a medium- to long-term step change in the market’s fundamentals.

“But from the time they breached U$9,000 in February, a test of the previous record high looked to be a near certainty,” she said. “In this regard, without evidence of a major change to the tight supply picture, consolidation in this range has not been a major surprise.”

Commenting on his price forecast at the start of the year, Dan Smith of Commodity Market Analytics told INN that he expected copper to fall back in H2.

“While the sharp drop in June came earlier than expected, we think it is a fair reflection of a softer fundamental picture and a recognition that prices had risen too far, too quickly,” he said.

During the second quarter of the year demand for copper usually slows down due to seasonal reasons, according to most analysts.

“This year is also likely to see a greater-than-normal pullback in demand as China is tightening credit conditions and running down inventory levels built up at the low point of the price cycle,” Smith said.

Despite being a seasonally quieter period for demand, Norton expects demand to remain reasonably strong on a year-on-year comparison basis.

“Concerns about the potentially negative impact of monetary tightening remain, but the consumption picture remains generally positive this year,” she said. “Of course, it has benefited so far this year from the comparison with the months in 2020 when COVID-19 was having a particularly negative impact.”

Refinitiv expects copper demand growth in China to slow, but the country will still post an increase of close to 3 percent for the year as a whole.

“Meanwhile, demand in the US is widely seen on an upward trajectory in coming years with the massive infrastructure spending plans that are expected to be more copper intensive than most,” Norton added.

Looking to Europe, CRU’s Edwards said demand appears likely to remain strong through the third quarter — although Europe and other northern hemisphere markets usually see some seasonal slowdown in July and August.

“In some other countries and regions which have been struggling with fresh COVID-19 outbreaks there is more uncertainty,” he said.

Expectations of demand for copper in electric vehicles have continued to drive prices in 2021. “The copper bulls have the bit between their teeth in terms of green energy and demand prospects,” Norton said.

“There is no question that copper has a big role to play in a decarbonized world, but ultimately we feel that vastly inflated copper prices will leave consumers searching for cheaper alternatives such as aluminum, and that demand growth will not fulfil the dizzy heights currently bandied around.”

Furthermore, the expert said scrap is also likely to become an increasingly significant feature in the supply picture, helping to reduce the reliance on new mines.

Similarly, Smith said copper demand will get a significant boost from the green energy transition, but the impact for now is relatively modest.

“We can see this from looking at the electric vehicle market, where sales are still very small relative to traditional vehicles,” he added.

Edwards agreed, saying the green energy narrative has undoubtedly been a factor in driving the copper price higher. “However, it should be remembered that globally electric vehicles and renewables (solar and wind) only account for less than 5 percent of global copper demand currently, and it won’t be until after the mid-2020s that this percentage exceeds 10 percent,” he added.

Looking over to copper supply, the picture for output in 2021 is getting brighter — treatment charges are increasing, which is a sign of recovery.

“It is becoming increasingly clear that the tightness in copper mine supply is starting to ease, and treatment charges are rising as a result,” Smith said. “The second half of this year will see key projects such as Grasberg in Indonesia and Kamoa in the Democratic Republic of Congo (DRC) ramping up, adding to other projects which are already in the pipeline.”

This strength in supply fits Refinitiv’s view that mine production is picking up and on course to grow in the region of 2.5 percent this year, with growth accelerating into 2022.

“It is only in 2025 that we see below-trend growth again, although this does coincide with expectations of demand growth getting a leg up from the green energy narrative,” she said.

Junior miners around the world have been pushing forward with projects to feed the growing demand for copper, with many TSX– and TSXV-listed companies seeing gains through the first half of the year.

For Smith, one of the main challenges faced by copper miners today is the extra pressure due to environmental, social and governance concerns.

“This is adding to industry concerns that the period from 2025 to 2030 could see another structural shortage emerge,” he said. “Related challenges include a lack of water, limited options for clean energy and unpredictable legal and tax rules in key parts of Latin America and Africa.”

Commenting on which projects are likely to succeed going forward, Smith said that as the industry has looked more widely for copper projects, the chances of an individual project failing or falling behind schedule have certainly risen.

“This is making supply forecasts very unpredictable,” he said. “Brownfield projects are more likely to succeed than greenfield, and likely growth areas over the next five years will include Chile, the DRC, Indonesia and Peru.”

For her part, Norton is optimistic on projects that are owned or backed by the majors.

“There are several projects in Russia which seem also to be making good progress, and despite start dates pushing out slightly for at least one year, they could start up around the time that strong supply growth is expected to become more critical to satisfy new demand,” she said. “Some of these projects benefit from having Chinese smelters as customers.”

As the second half of the year unfolds, there are a few catalysts investors should keep an eye out for.

For Smith, conversations and fears about inflation have been strong drivers for prices in H2 so far.

“We suspect that fears about runaway inflation are overdone and speculation will not be able to override more bearish fundamental drivers in the months ahead,” he said.

Commodity Market Analytics expects copper prices to finish this year in the range US$8,000 to US$8,500. Meanwhile, CRU is expecting copper prices to trend modestly lower from today’s level to somewhere around US$9,000 in Q3.

Beyond broader macro themes, the current labor contract negotiation at Escondida in Chile is one key factor to watch moving forward, according to Edwards.

“How exchange copper inventories move is also worth keeping an eye on, given the still-low levels,” he said. In an effort to control rising commodity prices, China announced during Q2 that it would release reserves of key metals, including copper.

The State Reserve Bureau’s selling unsettled the market for a time, but prices recovered when the amounts released in the first auction were deemed modest, Norton explained.

“History tells us that the impact of these sales doesn’t tend to result in lower prices,” she said. “However, details about sales further ahead have not yet been released, and further pronouncements may still unsettle the market.”

For Smith, China’s effort to control the market and its actual impact on copper is split in two.

“China’s attempts to slow demand growth are likely to be effective as the government has strong control over the economy and major corporations such as the state grid,” he said. “However, attempts to drive down prices by selling strategic reserves look counterproductive as the market knows that this will not last long and should be easily absorbed.”