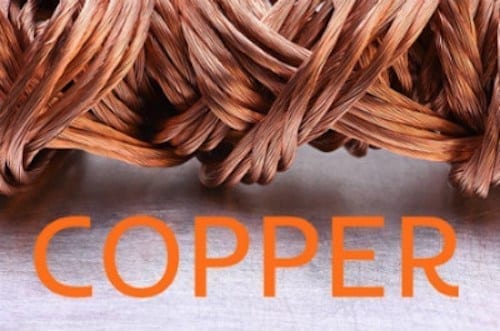 Mined rock typically contains less than 1 percent copper. That means that to become a market-ready copper product it must undergo a variety of physical and chemical processing steps.

After mining, the first major step in copper refining is concentration. This crucial process, which is generally conducted at or very near mine locations to save on transportation costs, involves grinding mined ore to roughly separate copper from waste rock.

The copper is concentrated further by slurrying the ground ore with water and chemical reagents. In this process, air is blown through the mixture, and the copper floats to the top. The copper is then removed with a skimmer. At the end of this step, copper concentrations are typically between 24 and 40 percent.

After concentration is complete, the next phase in creating market-ready copper is refining. That typically takes place away from the mines themselves at a refining plant or smelter. Through copper refining, unwanted material is progressively removed and copper is concentrated at up to 99.99 percent purity, the standard for Grade A copper.

The slag is discarded and the matte is recovered and moved to a cylindrical vessel called a converter. A variety of chemicals are added to the converter, and these react with the copper. That results in the formation of converted copper, called “blister copper.” The blister copper is recovered and is then subjected to another process called fire refining.

In fire refining, air and natural gas are blown through the copper to remove any remaining sulfur and oxygen, leaving refined copper behind to be processed into copper cathode. This copper is cast into copper anodes and placed in an electrolytic cell. Once charged, the pure copper collects on the cathode and is removed as a 99 percent pure product.

In hydrometallurgy, copper concentrate undergoes refining via one of a few processes. The least common method is cementation, in which an acidic solution of copper is deposited onto scrap iron in an oxidation-reduction reaction. After enough copper has been plated, the copper is then further refined.

The more commonly employed refining method is solvent extraction and electrowinning, or SX/EW. This newer refining technology became widely adopted in the 1980s, and, according to the Copper Development Association, roughly 20 percent of the world’s copper is now produced via this process.

This solution is then put through the electrowinning process, which, simply put, plates copper in the solution onto a cathode. This copper cathode can be sold as is, but can also be made into rods or starting sheets for other electrolytic cells.

Copper refining: Getting to market

Mining companies may sell copper in concentrate or cathode form. As mentioned above, copper concentrate is most often refined using equipment at a different location than company mine sites.

Concentrate producers sell a concentrate powder containing 24 to 40 percent copper to copper smelters and refiners. Selling terms are unique to each smelter, but in general, the smelter pays the miner approximately 96 percent of the value of the contained copper content in the concentrate, minus treatment charges (TC) and refining charges (RC).

TCs are charged per tonne of concentrate treated, while RCs are charged per pound of metal refined. These charges fluctuate with the market, but are often fixed on an annual basis. TCs and RCs tend to rise when there is a high availability of copper ore.

Miners indicate copper concentrations, although they may be spot checked by a third party when en route to the refiner. Additionally, penalties may be assessed against copper concentrate according to the level of deleterious elements contained, such as lead or tungsten.

Most smelters have strict limitations on permissible concentrations of impurities, and if concentrate producers do not meet these requirements, they will be subject to financial penalties.

Miners may also receive a credit for “valuable” minerals, such as precious metals gold and silver. TCs and RCs are levied separately on these metals.

Smelters generally operate by charging tolls, but they may also sell refined metal on behalf of miners. All of the risk (and reward) of fluctuating copper prices, then, falls on miners’ shoulders.

Don’t forget to follow us on INN_Resource for real time updates!

6 responses to “Copper Refining: From Ore to Market”