From June 21 to 26 the Investing News Network had the opportunity to visit six mining project sites in the Yukon. These are the highlights from days three and four.

Canada’s Yukon is attracting increasing attention as a mining jurisdiction, and from June 21 to 26 the Investing News Network (INN) had the chance to see why the territory appeals to companies and investors alike.

On a six-day tour hosted by the Yukon Mining Alliance and the government of Yukon, members of the media visited sites, heard from mining executives and got a sense of what the Yukon has to offer. Overall, INN came away with a greater understanding of the region — and with plenty of information to share with those interested in the land of the midnight sun.

Click here to see what happened on days one and two of the tour, or scroll on for a pictorial overview of days three and four. Stay tuned to learn what went on during the last two days.

After spending the night in Keno City our group made the short drive over to Alexco Resource‘s (TSX:AXR,NYSEAMERICAN:AXU) site. The company is perhaps best known for its Bellekeno silver mine, which was Canada’s only operating primary silver mine from 2011 until its closure in 2013.

During a presentation, President Brad Thrall explained that a variety of factors led the company to shutter Bellekeno, including a lack of material for the mill at the property and a less-than-ideal streaming deal with Wheaton Precious Metals (TSX:WPM,NYSE:WPM), then known as Silver Wheaton. Since then Alexco has been expanding its knowledge of the area and addressing those and other factors. 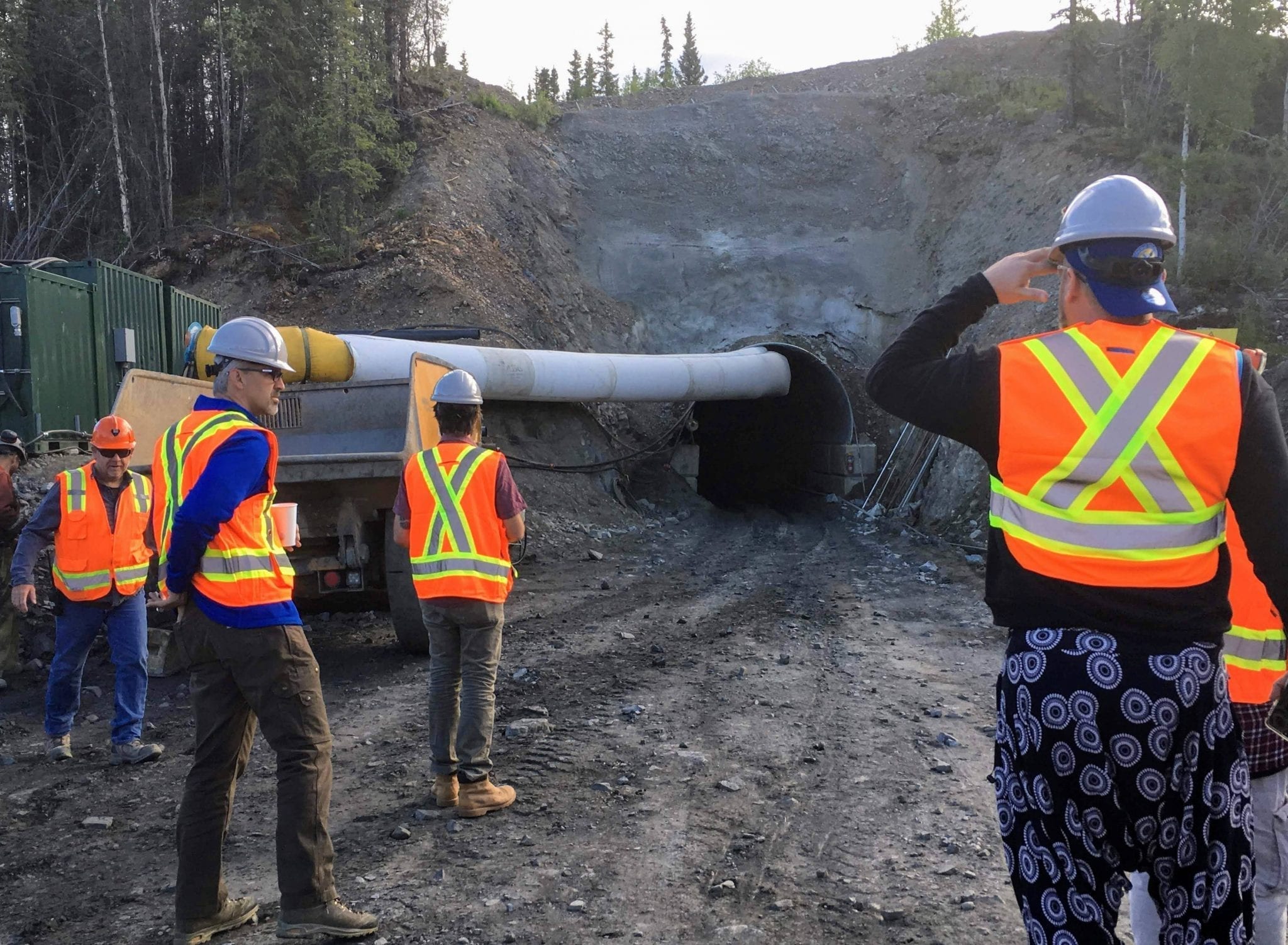 Standing outside the entrance to the Flame & Moth decline. We were able to go a short way into the tunnel.

Alexco currently has a number of near-term catalysts, with one key upcoming event being the release of a prefeasibility study (PFS). The company expects the PFS to be complete in the third quarter of this year, and will use the study to make a decision on whether to start production up again.

Assuming that it reaches a positive decision on production, the company plans to ultimately produce at four mines: Bellekeno, along with Flame & Moth, Bermingham and Lucky Queen. All are fully permitted except for Bermingham, and Alexco will be bringing it into the water license phase in the next 30 days. 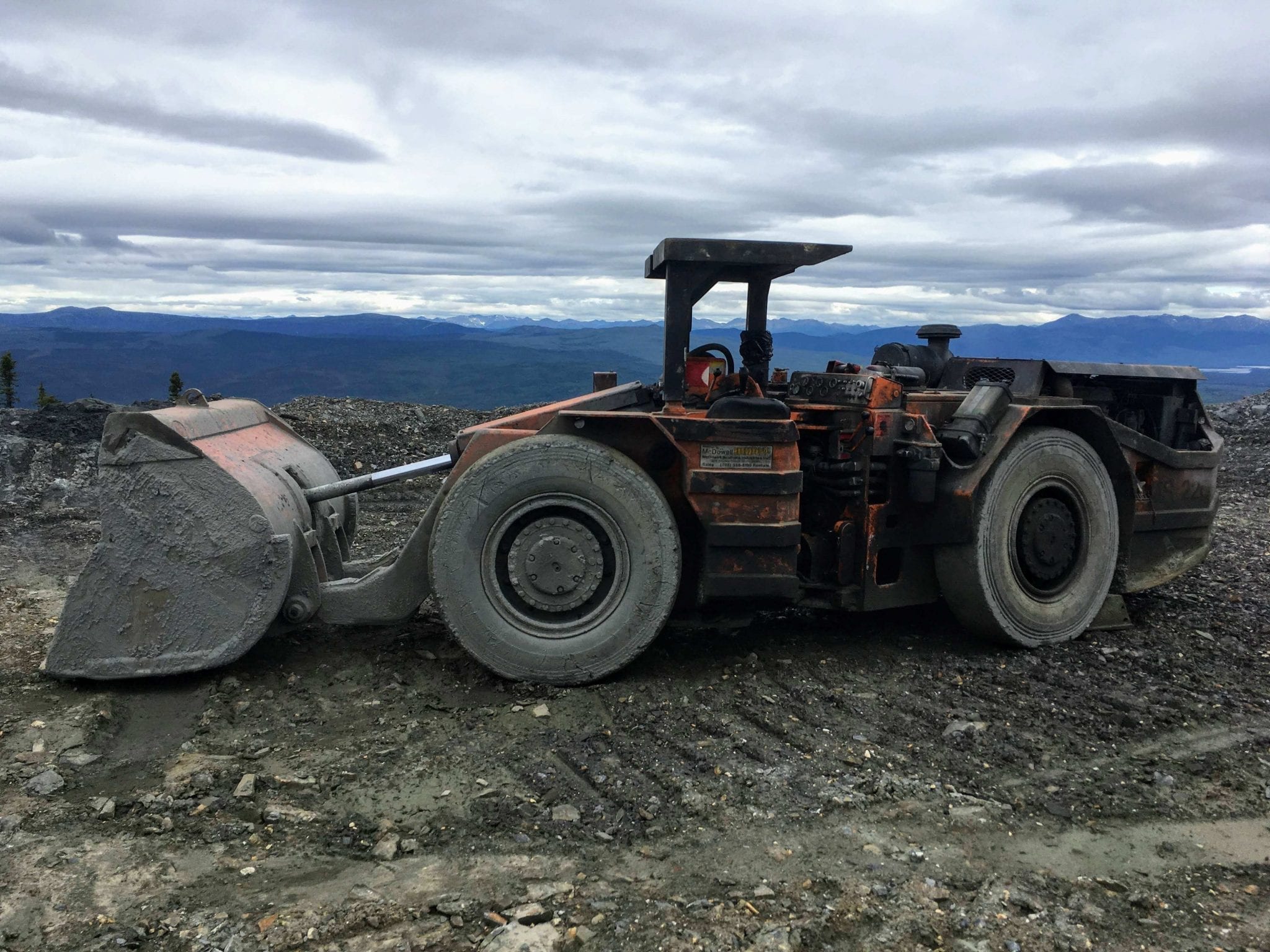 Making a stop on our tour around Alexco’s property.

Thrall also spoke about Alexco Environmental Group (AEG), the company’s environmental consulting and remediation arm. AEG was set up when Alexco originally acquired its property, the company has since made the decision to grow the business — earlier this month, AEG acquired Contango Strategies.

At Alexco’s property we also heard presentations from Banyan Gold (TSXV:BYN) and Metallic Minerals (TSXV:MMG), both of which have assets close to the Alexco site. In true Yukon fashion, the companies have collaborative rather than competitive relationships, and share knowledge when possible.

The afternoon brought us to ATAC Resources’ (TSXV:ATC) Rackla project, which is made up of the Osiris, Orion and Rau projects. We touched down near the border between Orion and Osiris — major miner Barrick Gold (TSX:ABX,NYSE:ABX) has the option to earn up to a 70-percent stake in Orion, and ATAC recently released an initial inferred resource for Osiris.

Osiris’ inferred resource clocks in at 1,685,000 ounces of gold at an average grade of 4.23 g/t (in 12.4 million tonnes). That includes a pit-constrained resource of 1,055,000 ounces of gold at 4.08 g/t (in 8 million tonnes). “It’s the second-highest grade open-pit resource in North America [and that’s] out of a maiden resource,” said President and CEO Graham Downs. “There’s a lot to be said about that.” 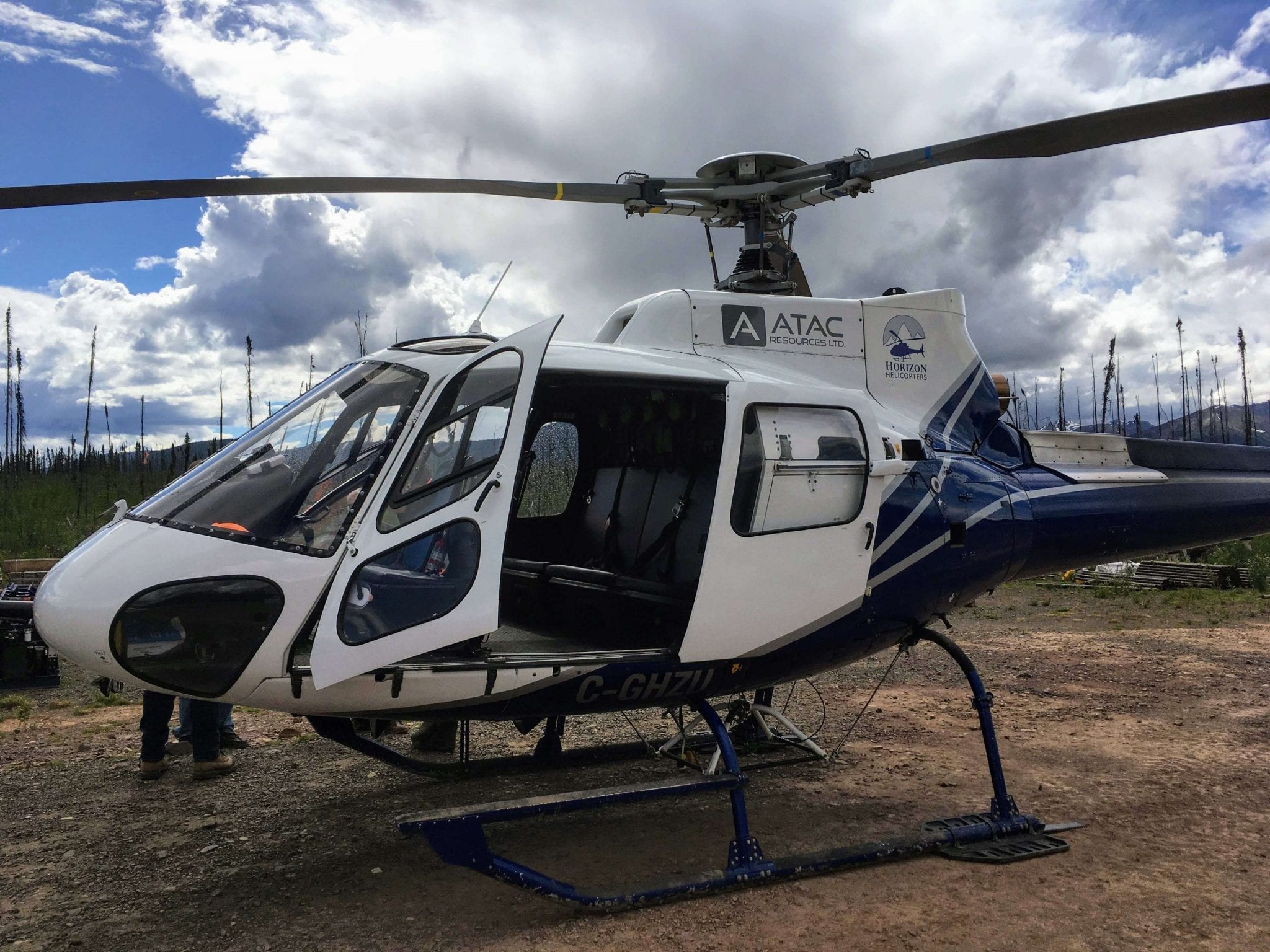 We took a short helicopter ride over to ATAC’s camp. Many of us had not been in a helicopter before.

Speaking about Barrick’s involvement with Orion, Downs explained that the company’s interest stems from the fact that it’s located in what ATAC says is Canada’s only Carlin-style deposit. These big deposits are largely confined to Nevada, where Barrick subsidiary Barrick Nevada operates the Cortez and Goldstrike properties. 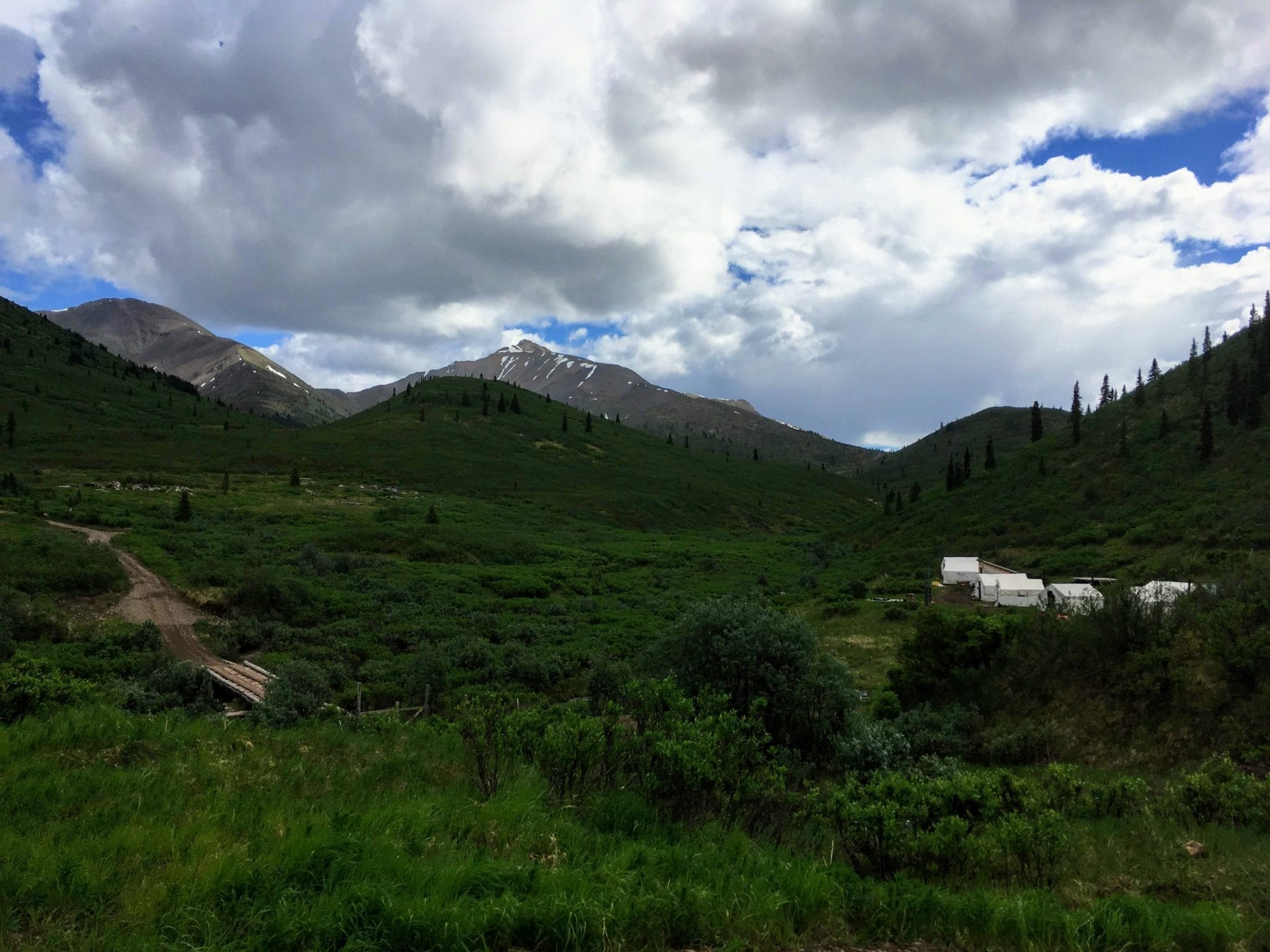 Walking over to ATAC’s core shack. Rackla was one of the more picturesque properties we visited. 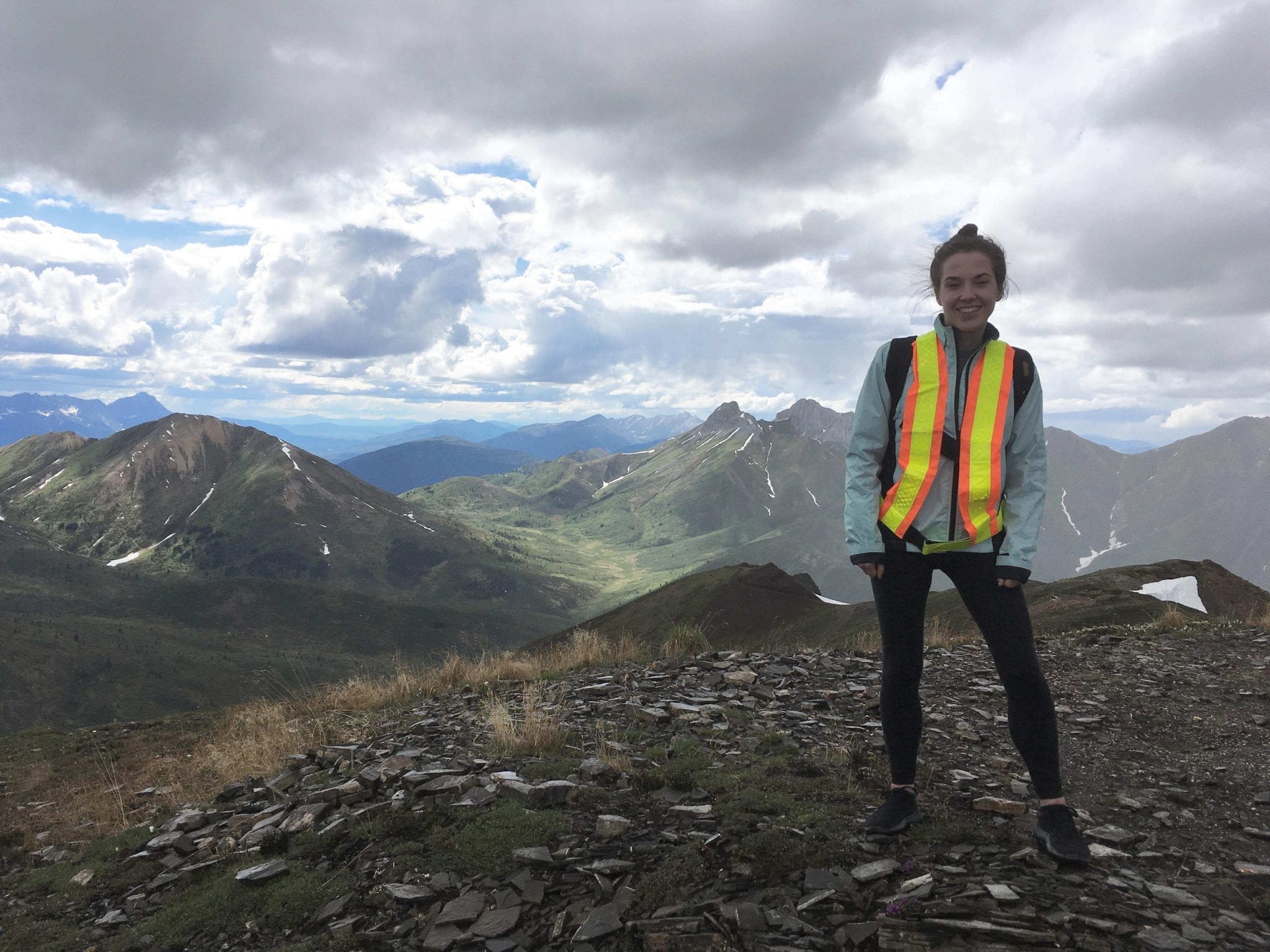 We took another quick helicopter ride to get to this vantage point.

ATAC has plans at all three areas of Rackla this year, including a 10,000-meter diamond drill program at Osiris, a $6-million discovery drill program at Orion funded by Barrick and prospecting at Rau to refine targets for drilling. “Everything we’re doing this year is expansion,” said Downs.

The fourth day of the trip brought a change of pace. Our crew was back in Dawson City, where we attended the Yukon Investment Conference. Held on a sunny day outside the historic Yukon Commissioner’s residence, the event allowed us to speak more closely with companies on the property tour, as well as Yukon-focused companies not on the docket. 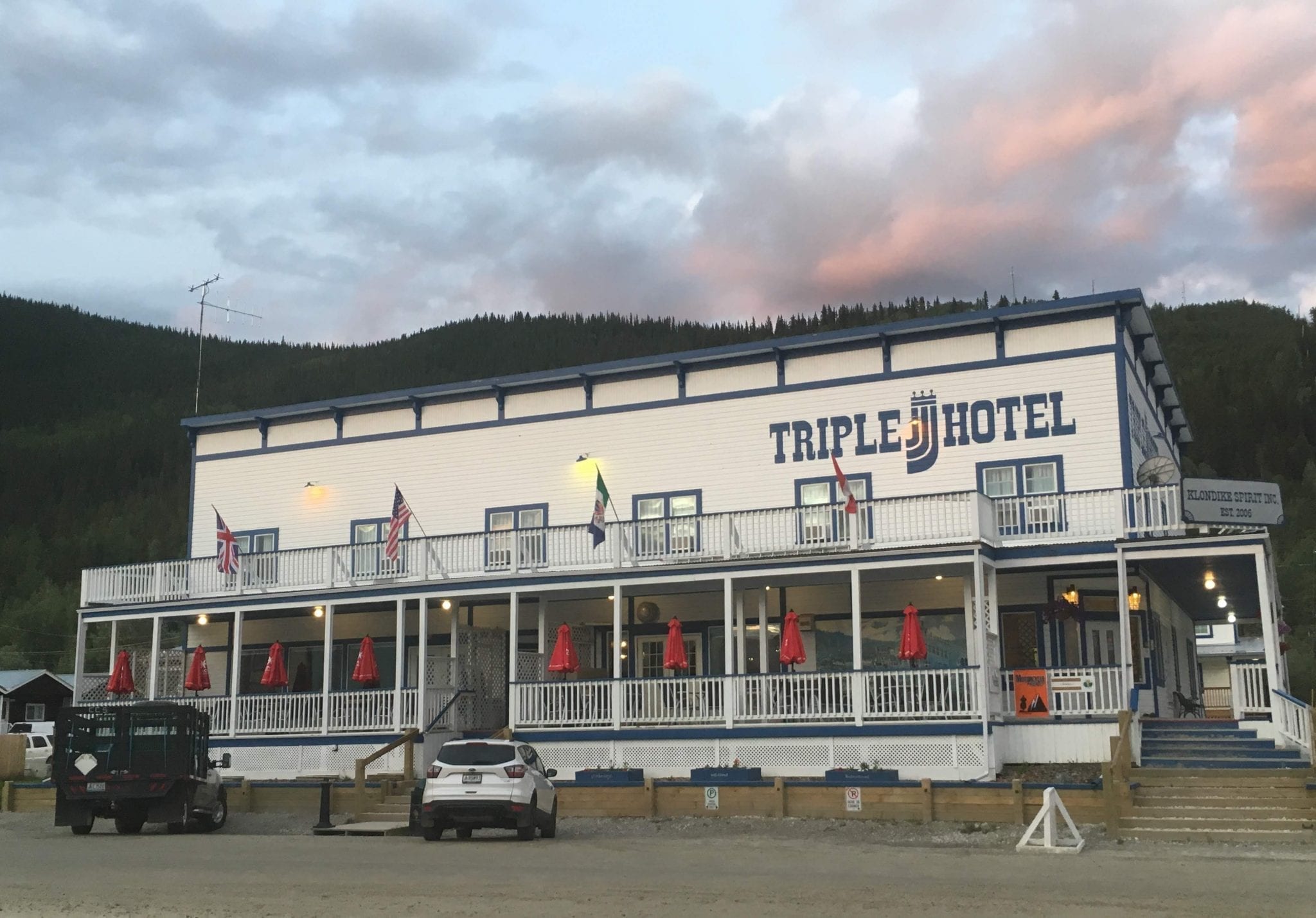 One of the hotels we stayed in at Dawson City. It may be light out, but it’s actually late at night!

The Honorable Ranj Pillai, whose titles include Yukon deputy premier, minister of energy, mines and resources and minister of economic development, took the stage to kick off the conference. Pillai commented on the increasing activity from both majors and juniors, saying, “we’re pretty excited about what we see coming through this year.” He added, “we’re anticipating another busy season.” 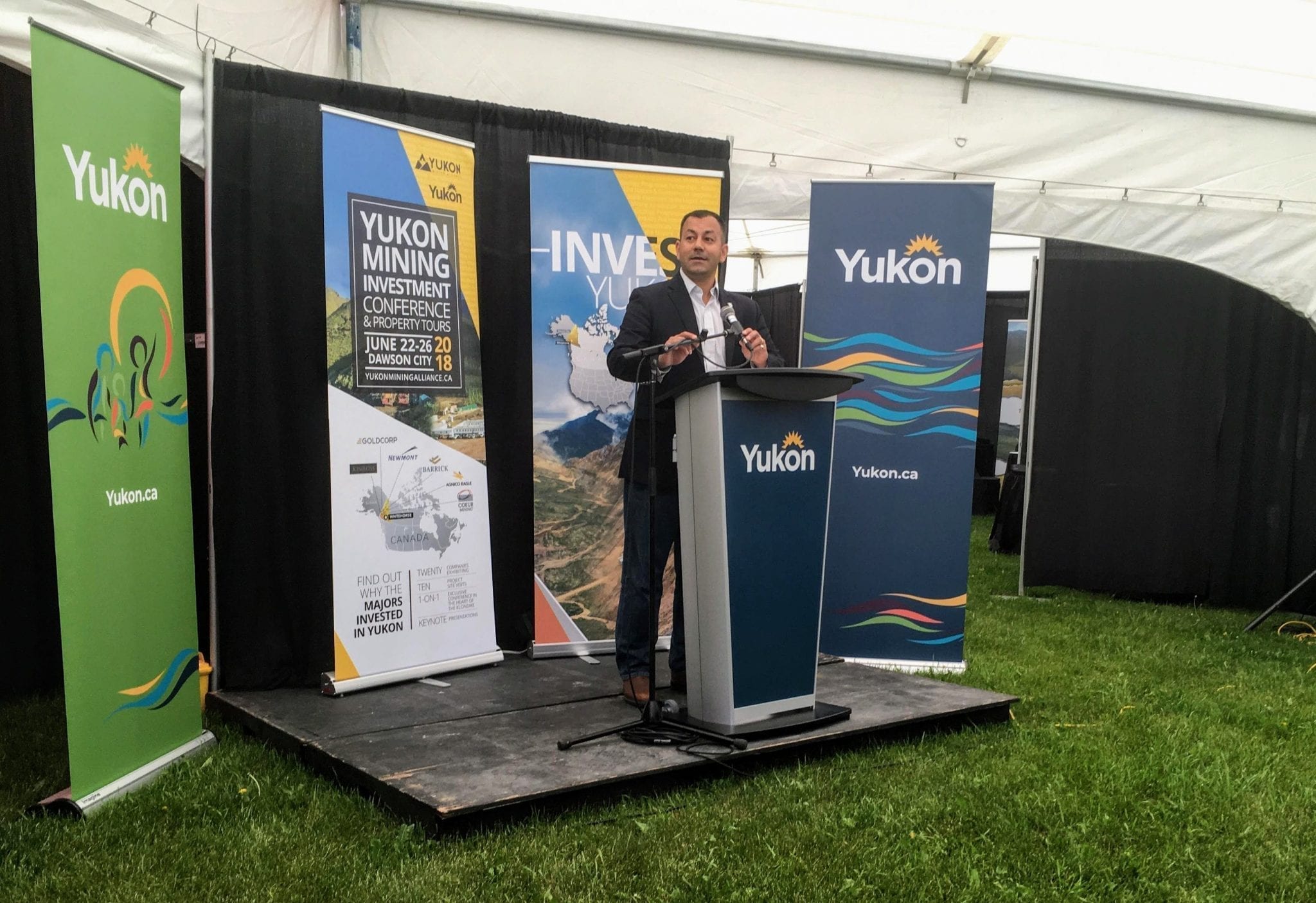 The Honorable Ranj Pillai addresses the crowd at the Yukon Investment Conference.

Stay tuned for more in-depth coverage of Alexco and ATAC, plus some of the other companies INN spoke to at the conference. Our overview of the final two days of the property tour will be posted soon.