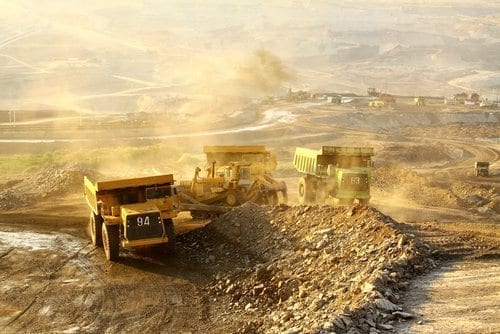 Nevada’s long history as one of the most productive gold regions in the United States has helped drive modern gold exploration in the state.

Few gold districts in the world drive exploration excitement like Nevada. With a favorable jurisdiction and storied history of exploration success, junior mining companies are looking to Nevada to develop a name for themselves.

Prospectors and exploration companies have been striking it rich in Nevada since the mid-1800s. However, the prospectors of old probably couldn’t imagine the large discoveries and the resulting explosion in gold production in the late 1980s that continue to propel the modern exploration boon in Nevada.

Nevada now sits comfortably as the largest gold-producing state in the US with 23 major gold mines in operation. Nevada also ranks quite high on the international stage, ranking 4th in the world for gold production, producing 5.5 million ounces of gold annually.

Getchell Gold Corp. (CSE:GTCH, OTCQB:GGLDF) is a mineral exploration company advancing its growing portfolio of gold and copper projects in the premier mining jurisdiction of Nevada.Send me an Investor Kit

Companies including Barrick Gold (TSX:ABX,NYSE:ABX) and Newmont (NYSE:NEM) have thrived and risen to prominence in this setting. Newmont is credited for discovering the now world-renowned Carlin Trend and operating the first mine in the area. Newmont has expanded on its initial success and currently operates multiple mines in the region such as the open-pit Emigrant and Gold Quarry mines in the south end, and the Silverstar mine in the north end. Newmont’s underground operations include Leeville, Chukar, Pete Bajo and Exodus.

One of Barrick’s largest producers in Nevada is the Goldstrike mine. Goldstrike is one of the top gold mines in the world, comprising the Betze-Post open-pit mine, along with the Meikle and Rodeo underground mines. In 2018, the Goldstrike mine produced 2.1 million ounces of gold.

The long track record of successful gold exploration and development in Nevada has led a number of junior resource companies to target properties in this mining-friendly state. One such company is Getchell Gold Corp. (CSE:GTCH, OTCQB:GGLDF). In January 2020, Getchell announced that it had markedly expanded its holdings in Nevada by acquiring two historic mines from Canarc Resource (TSX:CCM,OTCQB:CRCUF), Fondaway Canyon and Dixie Comstock. “The acquisition of these two properties, boasting significant gold in the ground, dramatically transforms Getchell Gold’s standing and future potential especially considering the recent dramatic rise in the price of gold and the wholly supportive market,” said Bill Wagener, CEO of Getchell Gold.

Wagener went on to say that he believes the historical mineral resources estimate of 409,000 ounces of gold grading 6.18 g/t in the indicated category and 660,000 ounces of gold grading 6.4 g/t gold in the inferred category at the Fondaway Canyon property provides an incredible foundation for the company. A seven-hole drill campaign conducted by a previous operator in 2017 targeted mineralization between and below the prominent mineralized zones. The 2017 drill program was highly successful in terms of supporting gold mineralization widths and grade, the continuity of mineralization along trend, extending the depth of the known mineralization and intersecting significant intercepts outside of the known boundaries of the mineralization. The 2017 drill campaign occurred after the completion of the historical mineral resource estimate and, as such, the results were not included in the historical resource estimate. Getchell has assessed the results of this drilling and the company’s commentary can be seen in its recent news release.

“In addition to exploration success, one of the most critical elements in the development of any resource project is the jurisdiction that the project resides within. Nevada has a well-deserved reputation as a ‘mining-friendly’ jurisdiction. That reputation is built on the support for mining at the state and local levels, a clear and consistent permitting process, security of title, local infrastructure and availability of labor,” said Wagener. Moving forward, Getchell Gold intends to focus on advancing its flagship Fondaway Canyon gold project.

Nevada’s rich mineralization and mining-friendly policies have enabled the state to emerge as one of the world’s leading gold producers. Following in the footsteps of major producers like Barrick and Newmont, junior exploration companies, including Getchell Gold, are continuing Nevada’s rich exploration history in pursuit of deposits similar to those that gave the state its reputation as one of the world’s most productive gold regions.

The information contained here is for information purposes only and is not to be construed as an offer or solicitation for the sale or purchase of securities. Readers should conduct their own research for all information publicly available concerning the company. Prior to making any investment decision, it is recommended that readers consult directly with Getchell Gold and seek advice from a qualified investment advisor.