Last year, the silver price dropped drastically from $18.29 an ounce at the beginning of 2015 to $13.83 to kick start 2016. No doubt, the silver price has been on the rebound this year, rising 42.66 percent back up to $19.62. Plenty of silver price predictions are calling for a correction for the white metal, however.
While the silver price is currently hovering just under $20 an ounce, the white metal closed in around $21 an ounce in July post-Brexit and has outperformed its sister metal, gold, by almost double.  While the yellow metal has also seen a significant increase this year, by comparison its increase year-to-date is 25.31 percent.
The charts below show  comparison between the silver and gold prices so far in 2016, as per Kitco. 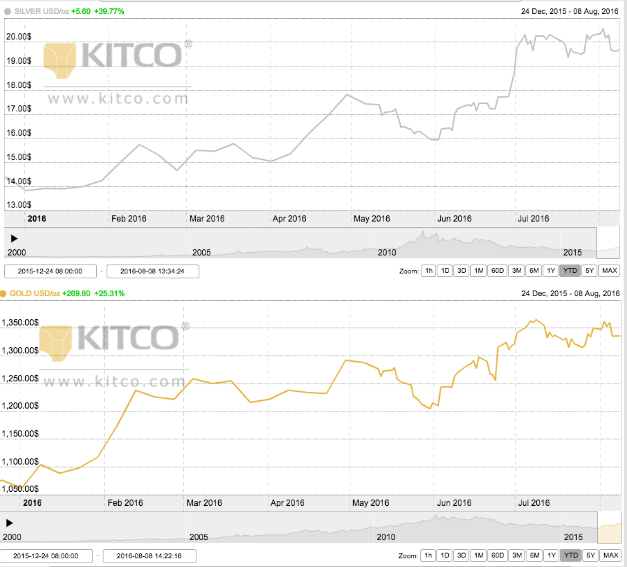 Moving ahead for the rest of the year, silver price predictions from analysts polled by FocusEconomics in its July 2016 report put prices ending the year at lower levels than what they’re currently at, with a minimum average of $13.4 per ounce and a maximum of $20.5 per ounce.
With the silver price rising drastically this year, Investing News Network (INN) looked at what the contributing factors are and a few new silver price predictions.

Because the silver price has increased significantly year-to-date, there have been a number of contributing factors to its success. Here’s a brief overview of why the white metal has fared well so far this year:

In early July, the silver price reached a two-year high as it jumped over $20 an ounce. Demand from Chinese buyers was a contributing force, as reported by the Wall Street Journal. Mining.com also wrote that Asian buyers were quick to dive into physical silver.
Of course, it’s difficult to talk about the silver price without talking about demand for the white metal. As Todd Anthony from First Majestic Silver (TSX:FR) said in an interview with INN, silver has underperformed gold over the last four or five years until now, and investment demand is increasing globally.
“You’ve got solar panels. You’ve got hospital applications. You’ve got anti-bacterial usages, TVs, cellphones, you name it. There’s always new applications for silver and there’s a lot more to come,” Anthony said in the interview.
Peter Krauth, resource specialist at Money Morning, made similar comments, stating that demand for solar power is rapidly growing.
“With solar panels containing an average of 15 to 20 grams of silver each, this industry will have a marked impact on demand, which will translate into higher silver prices,” he said in the publication.
A Profit Confidential article also suggested that supply is shrinking and demand for the white metal continues growing, and its usage in an assortment of electronic devices will drive demand for the metal higher.

Although the silver price has cooled off somewhat due to losses after the US’ job data on August 5, silver is still the best performing precious metal and some analysts are projecting it will continue rallying.
Over at Money Morning, Krauth said the silver price could reach $22 an ounce by September.  Another analyst over at Profit Confidential said the silver price could hit $50 by 2017 if supply continues going in a downward trend while demand for the white metal rises.
No doubt, it’s exciting times for the precious metal, and  investors will surely have something to consider when looking into the silver sector.
Don’t forget to follow us @INN_Resource for real-time news updates!

**This is an update to an article written on December 7, 2015. Read above for the most up to date content.**
Silver Predictions 2016: Watch China and the Gold Price
This time last year, silver market watchers were hopefully predicting that the white metal’s price might improve by the end of 2015. The metal was changing hands at about $16 per ounce, and some analysts were predicting that in 2015 it would average over $18.
As those who’ve followed the silver market this year are no doubt aware, those predictions were off the mark. As of the end of November, the silver price was down a whopping 11.73 percent year-to-date, changing hands at just $14.19. And according to Thomson Reuters GFMS, as of November 13, the silver price had averaged only $15.91 for the year.
Take a look at the chart below from Kitco for an overview of silver’s price activity in 2015:


The question now, of course, is “what went wrong?” To answer that question and to find out what’s in store for 2016, the Investing News Network reached out to silver market participants, including Erica Rannestad, senior analyst at Thomson Reuters GFMS. Read on to find out what they had to say.


Grab Your Report!
Looking more closely at silver supply and demand for 2015, Rannestad said that total silver supply is expected to come to 1,014.4 million ounces this year, down 3 percent from 2014. Factors driving the decline include flat mine production, lower scrap return and net dehedging of 12.6 million ounces.
Meanwhile, total physical demand is set to fall 2.5 percent in 2015, hitting 1,057.1 million ounces. As stated, Thomson Reuters GFMS sees the weak Chinese economy as being largely responsible for that fall; however, Rannestad also mentioned the “miniaturization of consumer mobile devices” as a factor. “That’s a trend that’s really reduced the amount of silver needed on the whole per unit,” she said.
All in all, Thomson Reuters GFMS is calling for a physical silver deficit of 42.7 million ounces in 2015, and anticipates an average 2015 silver price of $15.51.

Looking forward to 2016, Rannestad cautioned silver market watchers not to get too excited about the deficit mentioned above. While generally deficits mean higher prices, she said that “annual surpluses and deficits are almost irrelevant to the [silver] price.”
Explaining further, she noted, “the physical surplus/deficit doesn’t matter year to year unless it’s very, very large.” The predicted 2015 deficit is far from large — at just under 43 million ounces, it’s a drop in the pond compared to the near billion ounces of supply set to enter the market. And while “a chronic deficit in the market can begin to influence prices,” a 2015 deficit would only be the third in a row.
In terms of price catalysts that investors should watch, Rannestad again pointed out that China has had a major impact on physical silver demand in 2015, and said market watchers should expect the same next year. She also noted that “anything that affects the gold price, obviously silver takes its cue.” Right now, of course, most gold bugs have their eye on the upcoming US Federal Reserve meeting — the expectation is that the central bank will raise interest rates, a move that will likely have negative repercussions for precious metals.
Overall, Thomson Reuters GFMS is predicting an average silver price of $16.80 for 2016. Here’s a further selection of silver price estimate from a variety of firms. Unless otherwise noted, prices are average forecasts for 2016 as a whole:

All in all, those forecasts are fairly — and in some cases very — optimistic considering where the silver price is today. And in general it seems that silver-focused companies are feeling somewhat hopeful as well.
Case in point: speaking to the Investing News Network about his silver predictions 2016, Brad Cooke, CEO of Endeavour Mining (TSX:EDR,NYSE:EXK), said he anticipates “a bottoming of gold and silver prices through the end of [2015].” Then, in 2016, he expects “gold and silver prices to start climbing, because they are well oversold from a historic point of view, [and] the fundamentals show supply is finally ready to decline and physical demand is already rising.”
He added, “the last five times the US Federal Reserve has raised interest rates, the US dollar actually declined and precious metals prices rose.”
Similarly, Shaun Dykes, president and CEO of American CuMo Mining (TSXV:MLY), is anticipating “a slight improvement in the market as supply-side curtailments continue, especially where silver is a by-product.”
Both CEOs also provided some sage advice for investors worried that 2016 will bring more pain for silver rather than the improvements many are calling for.
“Be just a little more patient,” said Cooke. “After more than a four-year correction in precious metals and mining stock prices, long-term investors should be looking to add to their positions while gold and silver complete their bottom this year.” He noted that his company might be an option for investors looking to do just that.
For his part, Dykes issued a reminder that following the herd is rarely the way to go when investing. “The time to build a silver portfolio is during low price environments, not during highs,” he noted, also stating, “if you wait for higher prices and the herd, the opportunity being created will be missed. Look and stick to low-cost commodity producers and avoid the hype.”
Certainly some food for thought as the silver market heads into 2016.


Grab Your Report!
Securities Disclosure: I, Charlotte McLeod, hold no direct investment interest in any company mentioned in this article.
Editorial Disclosure: American CuMo Mining is a client of the Investing News Network. This article is not paid-for content.
The Investing News Network does not guarantee the accuracy or thoroughness of the information reported in the interviews it conducts. The opinions expressed in these interviews do not reflect the opinions of the Investing News Network and do not constitute investment advice. All readers are encouraged to perform their own due diligence.
Related reading:
Silver Outlook 2015: Price May Improve by Year End
3 Trends for Silver in 2015