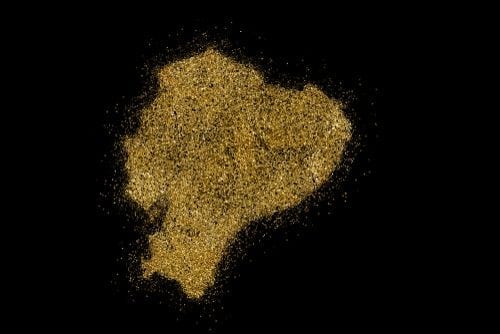 Ecuador’s precious metals production is low, but a number of foreign mining companies are hoping to change that. Here’s a look at gold mining in Ecuador.

When people think of resource extraction in Ecuador, oil and gas often come to mind first. Though it’s not a top producer, oil makes up a significant portion of the country’s export income.

That said, oil and gas are not all Ecuador has to offer. Although gold mining in Ecuador is currently marginal, a number of foreign mining companies have found world-class gold, silver and copper deposits in Ecuador, particularly in the southeast.

Some of these companies have faced major roadblocks in Ecuador in the past — for example, Kinross Gold (TSX:K,NYSE:KGC) backed out of its massive Fruta del Norte project in 2013 over disagreements with the government. Since then, the country has started doing more to attract mining investment.

According to a report from BMI Research, the nation will increasingly emerge as a mining investment hot spot in Latin America thanks to a combination of revised regulatory framework, significant gold and copper reserves and an “inclusive agenda of development.”

Thanks to those changes, the country now expects mining investment to continually rise, with expectations that it will total more US$7 billion by 2021 — a pretty impressive increase.

However, the area is not without conflict, as the country has recently been plagued by protests. These protests are the result of moves from Ecuador President Lenin Moreno, who is looking for ways to reduce government spending. He has proposed to do this by making changes that will make Ecuador more appealing to western investors.

Remi Piet, senior director at Americas Market Intelligence, recently told the Investing News Network, “We are seeing Ecuador moving away from (being) a mercantilist country that was on the side of globalization to one that tries to generate more international investment, that turns towards free trade, turns towards more support from western countries through the International Monetary Fund.”

According to Piet, the changes being made by Moreno today will positively affect the Ecuadorian economy and its mining operations. Piet believes that even if people who reside in the country initially fall on harder times, the economy overall will benefit from the reforms in the long run.

“Those reforms that Moreno is trying to pass were deeply needed in Ecuador … even if it’s extremely hard for the poorest levels of the population to face hikes in gas prices.”

Additionally, as Reuters reported earlier in the year, two of Ecuador’s five mines in development are set to begin copper and gold production in the fourth quarter of 2019.

“Two of the five big strategic projects will already yield financial returns this year,” said Fernando Benalcazar, vice minister of mines in the country. “We are no longer just a potential mining destination. Instead, Ecuador has already become an investment destination.”

For these reasons, many are confident that gold mining in Ecuador will increase and are eager to know which companies are operating in the space. Read on for a look at a number of companies that are currently focused on gold mining in Ecuador. Companies are listed by market cap in descending order; the list below was generated on October 24, 2019, using TradingView’s stock screener, and all stocks had market caps of over US$4 million at that time.

Lundin Gold bought Kinross Gold’s Fruta del Norte project in 2014 for C$240 million. Since acquiring the asset, the miner has signed all major agreements with the Ecuadorian government in order to start development, including the completion of a feasibility study and a project update.

Fruta del Norte is now one of the next major gold mines being developed. It is a large, high-grade gold deposit with probable reserves of 5.02 million ounces of gold grading 8.74 grams per tonne (g/t). Construction at the mine began in mid-2017, with the first gold recovery expected for Q4 of this year.

In 2018, the company completed a preliminary economic assessment for Cangrejos. It points to a 16 year mine life with average payable production of 373,000 ounces of gold and 43 million pounds of copper.

The asset also boasts an inferred resource of 408 million tonnes of 0.85 g/t gold equivalent, with 8.5 million ounces of gold and 1 billion pounds of copper. The company notes, “The deposit remains open to further drilling to the north, south, west and at depth.”

Aurania Resources is currently drilling at its Lost Cities project. The company is led by Keith Barron, who discovered Fruta del Norte, and the firm has a compelling story.

The Cordillera del Condor — the eastern foothills of the Andes in Southeastern Ecuador — hosts a well-endowed mineral belt that contains 26 million ounces of gold and close to 40 billion pounds of copper.

Since that time, the company has revealed that the asset contains proven and probable mineral reserves estimated at 2.6 million gold equivalent ounces, including 2.2 million ounces of gold, 13.3 million ounces of silver and 88 million pounds of copper grading 4.91 g/t gold, 29.6 g/t silver and 0.3 percent copper within 13.9 million tonnes.

Other companies focused on gold mining in Ecuador

Want more details on gold? Check out these articles for more INNdepth coverage:

Want an overview of investing in gold stocks? Check out A Brief Overview of Gold Investing and Prices.

Don’t forget to follow us @INN_Resource for real-time news updates! And please let us know in the comments if we’ve missed a company you think should be included on this list.