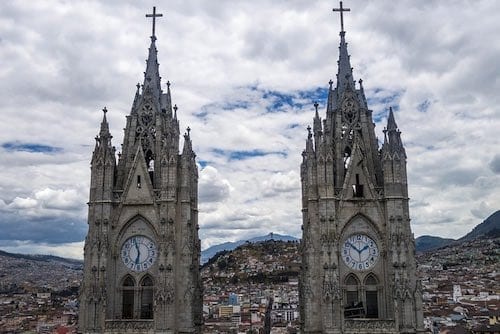 Ecuador has recently been rocked by protests against government austerity policies as the country moves towards the IMF and western money.

Update: Since recording, the Ecuadorian government has backed down on moves to cut the fuel subsidy that triggered protests around the country, though President Lenin Moreno has said the government will still be looking for ways to reduce government spending. In subsequent comments, Piet said that the initial subsidy cut was abrupt, and repealing the law to remove the subsidies leaves room for a more progressive cut.

Ecuador is looking for ways to reduce its dependence on China, open up its economy and boost its prospects, and in doing so it’s on track to become more appealing to western investors, according to Remi Piet, senior director at Americas Market Intelligence.

In an interview with the Investing News Network, Piet said Ecuador’s president, Lenin Moreno, is attempting to apply well-thought-out policies designed to rein in spending and bring the country’s economy in line with the rest of the world.

“We are seeing Ecuador moving away from (being) a mercantilist country that was on the side of globalization to one that tries to generate more international investment, that turns towards free trade, turns towards more support from western countries through the International Monetary Fund (IMF). But in exchange, it has to change its entire economy by limiting subsidies to the energy sector.”

The interview was conducted during protests that took place in the country between October 4 and October 14. Piet also took the opportunity to explore the context of the decisions being made by Moreno, and the support he had when he came to office in early 2017.

“Moreno is a fairly isolated president today that doesn’t enjoy the popularity that he used to enjoy at the beginning of his mandate,” he said.

According to Piet, the changes being made by Moreno today will have a direct impact on the Ecuadorian economy (and its associated mining operations), but in the long run, the economy will benefit from the implementation of reforms.

“Those reforms that Moreno is trying to pass were deeply needed in Ecuador … even if it’s extremely hard for the poorest levels of the population to face hikes in gas prices.”

Piet said that the size of the deficit is “staggering” and for the country to become a destination for foreign investment, the IMF’s help is needed.

He also talked about the role that China plays in the Ecuadorian economy, noting that just because the country is seeking new sources of investment, it doesn’t mean China is out of the picture.

3 responses to “Remi Piet: Changes in Ecuador Good in the Long Run”