Canada has been a hot topic for uranium market players due to the high-grade discoveries in the Athabasca Basin. But the buzz around Canadian uranium deposits should not take precedence over the bigger picture price catalysts at play in the United States. 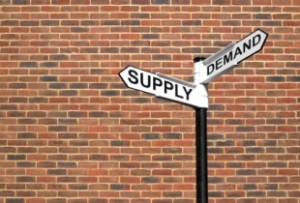 Canada has been a hot topic for uranium market players due to the high-grade discoveries in the Athabasca Basin. But the buzz around Canadian uranium deposits should not take precedence over the bigger picture price catalysts at play in the United States.

UIN: Given the current supply/demand situation in the U.S., do you think that the U.S. would look to other methods of energy generation (natural gas, coal) if they are incapable of meeting uranium demand?

CH: The uranium demand versus supply discrepancy in the United States has existed for many years. On the demand side, the U.S. maintains the world’s largest reactor fleet with about 100 operable reactors, or about 23% of the global operable fleet, and accounts for almost 29% of global annual uranium requirements for civil nuclear power generation. These reactors require in the neighborhood of 50 Mlb of uranium of U3O8 annually, yet U.S. uranium production was just a fraction of that in 2012, at just over 4 Mlb U3O8, similar to its annual average production since 2005 of about 3.9 Mlb. So the US has perennially sourced over 90% of its uranium demand requirements via imports.

So to answer your question directly, I don’t believe that the fact U.S. production of uranium falls dramatically short of consumption, will be the major determinant in a decision to shift the energy mix away from nuclear. I think that that decision will be largely economic and political. At low natural gas and coal prices and a large domestic resource endowment, and lower capital hurdles in these methods of power generation, coupled with the U.S.’s drive for energy independence, there is certainly a strong case for these sources, and they will compete with nuclear for years to come. On the other hand, the U.S. has a huge investment on the ground in nuclear and continues to invest with 3 reactors currently under construction, another 9 planned, and 15 proposed according to the latest World Nuclear Association data. These reactors have run safely and reliably over an extended period, but nuclear will probably always be tricky politically, despite the industry’s strong relative safety and environmental operating record.

UIN: There seems to be some uncertainty with regards to the future of the U.S. reactor fleet. What do you expect? Do you think lower natural gas prices could cause the U.S. to abandon nuclear?

CH: The U.S. already has a massive investment in nuclear on the ground, and many of those reactors are expected to operate for years to come. We also perceive the planned and proposed reactor data from the U.S., as well as funding for enrichment technology development, as a signal of an ongoing intention for investment in nuclear. I think ultimately lower natural gas prices, and coal prices for that matter, could delay and temper investment in nuclear in the U.S., but I don’t expect an abandonment of nuclear by any means. For the existing nuclear plants, uranium fuel represents a very small component of total costs relative to fossil fuel-based energy production, and this should support at least continued operation of existing plants for their useful lives.

UIN: Is there any indication about how much secondary supply is available to utilities?

CH: Secondary supplies of uranium have been a major source of reactor fuel for the U.S. fleet, and the U.S. is by far the largest consumer of secondary sources. The major source of secondary supply over the better part of the last two decades has been the Megatons to Megawatts Russian nuclear warhead down-blending program where inventory of highly enriched uranium has been down blended to low-enriched uranium. This program supplied about 20 million pounds of U3O8 equivalent to the U.S. in 2012, representing about 40% of fleet requirements. This program is scheduled to end later this year, and would reduce total uranium market secondary supplies by more than 40% in our estimation. In addition to that, the U.S. Department of Energy sales account for about 5 Mlb U3O8 equivalent annually.

Mixed oxide or MOX fuels from recycled uranium and plutonium account for between 7 and 10 Mlb U3O8 equivalent annually in secondary supply.  MOX fuel is only compatible for use in reactors designed for it, with the majority of those located in Japan. With the expiry of megatons to megawatts, we expect secondary sources of uranium to make up a materially smaller component of the supply equation, with primary sources, or mined uranium, picking up most of the slack. In 2013 we expect secondary sources will account for about 24% of total uranium supply, falling to about 18% in 2014, reducing the oversupply situation and eventually leading to a supply shortfall as the demand side recovers.

UIN: If China were to declare uranium a strategic metal, how would that impact the U.S.?

CH: I guess firstly, we should put this in context. China represents by far the largest piece of the future uranium demand growth equation in our view. The country currently has the world’s 8th largest operable reactor fleet at 17 units, but has 28 reactors under construction, over 50 planned, and almost 120 proposed. The World Nuclear Association estimates 2012 Chinese uranium production at 3.9 Mlb U3O8, representing about 2.6% of global supply, and less than a quarter of its nuclear fuel requirements. More than 97% of global production in 2012 was sourced from just 15 mines, all outside of China. China currently claims it has domestic uranium deposits representing as much as 10 times the externally known uranium reserves of the country. Those known reserves represent less than 4% of global reserves, and are generally low grade, placing an increasing reliance on external sources for import.

China declaring uranium a strategic metal could logically have uranium price implications to the external market. For example, if China embarked on an aggressive inventory building program, this could have a trickle-down effect on U.S. nuclear plant operators as prices respond, but conversely, in a global market, rising uranium prices would help U.S.-based uranium producers. On the topic of a higher uranium price, we note that we would expect the potential positive impact on U.S. domestic uranium producers to be much more pronounced than the negative impact to U.S. utilities of the increase in cost. This is due to the relatively small component uranium represents in the total operating cost of a nuclear plant.  There is no doubt that, given China’s aggressive civil nuclear expansion plans, uranium will be strategically important to the country. I think we’ve seen recognition of this from China as it invests in uranium deposits externally such as the massive Husab uranium deposit in Namibia, which is targeting production in later 2015, eventually aiming to produce more than 15 Mlb U3O8 annually.

UIN: Who are the main players in the United States uranium sector (major, mid-tier, junior) and where are they operating/exploring?

CH: Uranium concentrate production in the U.S. is currently sourced from just 6 operations controlled by 5 companies. Major uranium producers including Cameco (TSX:CCO, NYSE:CCJ), through its Smith Ranch-Highland operation in Wyoming, and Crowe Butte operation in Nebraska, and Uranium One (TSX:UUU), through its Willow Creek operations in Wyoming, are mining by in-situ recovery (ISR) method.

Advanced uranium project developers in the U.S. include Peninsula Energy (ASX:PEN), Uranerz Energy (TSX:URZ, NYSEMKT:URZ) and Ur-Energy (TSX:URE, NYSEMKT:URG), each completing construction of their respective ISR uranium facilities, all in Wyoming, and all aiming to be in production in the coming year. There are several uranium explorers active in the U.S. as well, particularly in the areas mentioned above, although continued consolidation is reducing their numbers.

One of the largest undeveloped deposits in the U.S., the Coles Hill project, is located in Virginia and is controlled by Virginia Energy (TSXV:VUI), and would be an open pit conventional mining concept.

UIN: A lot of the deposits in Wyoming are in situ recovery. How does ISR mining compare with hard rock mining (in terms of cost)?

CH: In-situ recovery mining, also known as in-situ leach, is a method of mining where uranium deposited in hydrologically confined layers of the earth is extracted by injecting a solution into the layers capable of dissolving the uranium, at targeted depths, through a series of injection wells, and pumping out this uranium-bearing solution through a series of grid-patterned recovery wells, for processing in surface-based treatment facilities. 45% of global uranium production in 2012 was by this method. ISR mining generally has the advantage of lower up front capital cost, and due to the mining methodology, a smaller surface impact.

UIN: There has been a lot of consolidation in the uranium sector in recent years, do you see this as being a trend that we will see more of moving forward?

CH: I still believe there is room for consolidation in the uranium sector globally. I think that in a recovering uranium price environment, you may see competition for some of the more interesting deposits out there.

I think that those who are consolidating now, when uranium prices seem to be bottoming, will be rewarded. Sitting on the sidelines too long may mean trying to make a move in a more competitive situation, and ultimately mean higher acquisition costs.

UIN: What role, if any, will utilities play in the industry’s consolidation?

CH: I don’t expect U.S. utilities will change their direction and become consolidators or owners of uranium producing operations. I do however see potential from utilities and state-owned enterprises elsewhere to become active investors in uranium producing operations. China, India, South Korea, Japan, and Russia come to mind obviously. I think U.S. utilities tend to be happier buying uranium through regular channels, typically contracts with existing and near-term producers, with a limited appetite for investment at the mine level, unlike some of their Asian peers.

UIN: Why is it that the Asian utilities might be more inclined to lock down future supply?

CH: It seems partly structural and partly philosophical. The United States has a great relationship with Canada – one of the largest producers of uranium in the world and it’s close. I don’t think that US utilities feel the same need or stress to lockdown future supply through ownership and development projects and mines.

The U.S. doesn’t have the same scale plan of civil nuclear expansion as China, with the U.S.’s fleet largely built and operating. China has to be looking at global uranium market forces.  Specifically current prices, supply, demand growth, and consider if market prices reflect a level high enough to incentivize the new mine construction, which will ultimately be needed to support incremental demand, of which China represents a large part.  China really has to consider its own impact on the demand equation and the market’s response – if they build those reactors, where is the uranium going to come from if market prices don’t properly reflect the future demand versus supply equation? They are not willing to risk that market forces will be efficient as they build out, and assume supply will be available.  As such, we expect China will continue to secure and develop strategic supply through investment at the mine project level.

UIN: Well, thank you Colin for sharing your insight with us.

Editorial Disclaimer: Interviews conducted by the Investing News Network are edited for clarity. The Investing News Network does not guarantee the accuracy or thoroughness of the information reported. The opinions expressed in these interviews do not reflect the opinions of INN and do not constitute investment advice. All readers are encouraged to perform their own due diligence.