The uranium spot price experienced momentum in the first quarter of 2021, but can it continue moving forward?

A series of mine closures in Canada mixed with supply chain disruptions pushed the value of uranium to a four year high of US$33.93 per pound back in May 2020.

The production interruptions reduced global output by as much as 13 million pounds and subsequently supported a higher price threshold for the commodity.

Output declines paired with an uptick in demand led to higher prices into last winter, and U3O8 ended 2020 at the US$30.20 level.

The material held in the US$29 range in January of this year before slipping to US$27.98 in February. Momentum set back in by March, sending prices higher to US$30.95.

Some of the recent price action is the result of changing sentiment around the use of uranium in the nuclear fuel cycle, which can be partially attributed to the new American president.

“(Since Joe Biden won), there’s been increased hopes for clean energy adoption, including on the nuclear side,” said Rohan Reddy, research analyst at Global X ETFs. “So I think there also was some price impact from that too, because prices started to increase at least a little bit from there.”

As the president touted the benefits of nuclear energy on the campaign trail, there was an increase in sector attention on the investment side.

“You also saw increased activity on the equity side from a lot of these traders trying to get out in front of it, and people buying uranium-based equities,” added Reddy. He went on to note the complexities of getting into the uranium market.

“A lot of times, it’s pretty hard to get access to futures contracts within the space — there are other commodities that are much more widely traded. So many people do so through the individual securities themselves or through an exchange-traded fund.”

In fact, over the last year, uranium as an investment theme is up 107 percent. Broader investment interest has continued to support prices, raising the bottom for the sector.

“We’ve been enjoying a series of higher lows for five years,” said Lobo Tiggre, founder and editor of Independent Speculator. “US$25 was last year’s low. If prices were to return to that level, it would break the lower bound of this multi-year upward trend. I’m not a technical analyst, but I’d be concerned if uranium prices dropped below about US$26.50.”

After reaching a two year high of US$72.63 in January 2011, uranium prices began to fall lower following the Fukushima disaster in March of the same year. The contraction sent values to a 12 year low of US$18.75 in 2016. 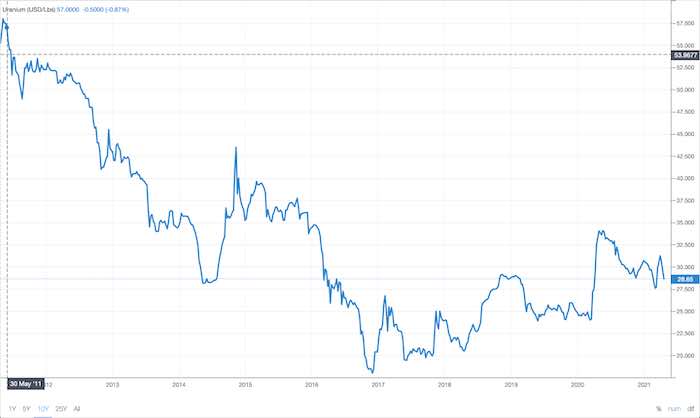 Since 2016, U3O8 has been slowly trending higher. 2020 saw the most marked gain, with values rising 37 percent from January to the commodity’s May high.

Not only did a reduction in supply drive prices higher, but 2020 also appears to be the year where oversupply stemming from 2011 began to have less of an impact on price movement.

“The big problem over the prior years was that it was an oversupplied market,” said Reddy. “In the wake of Fukushima, a lot of reactors were shut down, and many countries were re-evaluating how they wanted to use uranium.”

He went on to say, “But in the wake of what we saw with the COVID crisis, there were a lot of mines that were shut down. And it is a pretty concentrated market.”

In 2020, both Kazatomprom, which is Kazakhstan’s state producer, and Cameco (TSX:CCO,NYSE:CCJ), the sector’s largest public company, experienced production reductions and shortfalls. The former announced it would go ahead with previous plans to reduce output by 20 percent through 2022.

The drop in output was further compounded by Cameco’s production curtailments at the Cigar Lake mine in Canada. Operations at the world’s largest uranium asset were suspended several times in 2020 in effort to combat the spread of COVID-19.

This was further compounded by the long-term closure of Cameco’s McArthur River mine, which was shuttered due to low prices in 2018, removing as much as 18 million pounds from the global market.

“Anytime you see a couple of the large mining closures … that does have a pretty big impact on the uranium supply chain,” Reddy said. “That’s why we’re also seeing the market going into deficit for probably the next few years.”

As some majors deal with the long-term complications of COVID-19, uranium explorers and royalty companies have done well, seeing share price increases.

Some of the rise may be a result of nuclear energy converts, but Tiggre said there may be something else driving the growth as well. “I think we’ve seen significant new institutional buying. I don’t think the population of uranium bugs suddenly doubled in recent months,” he said.

“I think some deep-pocketed entities see the ‘when, not if’ writing about uranium on the wall, and have been building positions in advance of uranium prices breaking out again.”

As mentioned, changing attitudes to nuclear energy have also helped uranium in the last 12 months.

“The perception has been changing over the last few years. I think the biggest thing is people just want to reduce their fossil fuel footprints, both at the portfolio level if you’re an investor, but most importantly, if you’re a nation state, because it’s becoming more and more clear that this is impacting the environment in different ways,” said the Global X research analyst.

In his case for uranium, Reddy noted that nuclear is 70 times less carbon dioxide-intensive than coal, and can be more economical than green energy counterparts such as wind and solar.

Aside from that, there are more than 50 reactors in various stages of construction around the world. Once operational, the new reactors will boost the global fleet to roughly 490 reactors in 32 countries by 2027. Asia is leading the way in nuclear energy, with China and India implementing ambitious plans aimed at reducing their fossil footprints to net zero over the next few decades.

“I would say uranium is going to be becoming a bigger part of that (clean energy) equation, because it’s already a slightly more proven and clean energy-based resource,” he added.

In the document, the president commits to launching the Foundational Infrastructure for the Responsible Use of Small Modular Reactor Technology (FIRST) program.

The FIRST program will be administered by the US Department of State and will have an initial investment of US$5.3 million. Utilizing the modular design and scalability of SMRs, it will take a global approach to SMR expansion.

“FIRST provides capacity-building support to enable partner countries to benefit from advanced nuclear technologies and meet their clean energy goals under the highest standards of nuclear security, safety, and nonproliferation,” notes the statement.

In March, the president released his US$2 trillion infrastructure proposal, which calls for US$100 billion to expand and improve power lines and spur a shift to clean energy.

“Tucked in there was a lot of investment being made on behalf of the government into electric vehicles and clean energy technology. And it didn’t necessarily specify how they were going to do it,” said Reddy. “But nuclear is one of the easier ways to go about doing it.”

The speculation ultimately turned to interest, which translated into the U3O8 bump seen at the end of March, raising prices 10.6 percent month-over-month.

“If that infrastructure bill in its current form were to go through, including some of those clean energy technology ambitions, that would be really good for the uranium industry,” Reddy added.

Tiggre gave a more metered perspective, explaining that his first thought when hearing of the plan was, “Let’s wait and see.”

“They are making the right noises,” said Tiggre. “Secretary (John) Kerry told a bunch of MIT engineers that there is no alternative to nuclear energy and to, ‘Go for it!’ There’s money for domestic and advanced nuclear in Biden’s infrastructure plan. But I don’t see clear evidence that this politically touchy issue is a high priority for the administration.”

The U3O8 spot price has experienced some pullback in April, sliding to the US$29.20 level, although both Reddy and Tiggre see a value increase ahead.

“With more and more uranium companies taking pounds off the market, if nothing else changes, I think the odds are good for uranium hitting about US$32 to US$33 by the end of the year, possibly US$35,” Tiggre commented. Companies including Denison Mines (TSX:DML,NYSEAMERICAN:DNN) and US-based UEC (NYSEAMERICAN:UEC) have recently announced plans to acquire physical uranium.

“Whenever the utilities start buying, I expect a large gap upwards, towards the US$50 range. It’s also likely that when (or if) the US actually gets its uranium stockpile going, the price the government pays will have an immediate upward impact on the global spot market,” he added.

Reddy also expects a paced ascent for the energy metal in the medium to long term.

“I wouldn’t necessarily say we’re going to see prices shoot up, because even though we are in a deficit here, there’s been a balanced market at least over the near term,” he said. “We could see prices go up a couple dollars or a few dollars here, maybe even into that US$35 range rounding out 2021.”