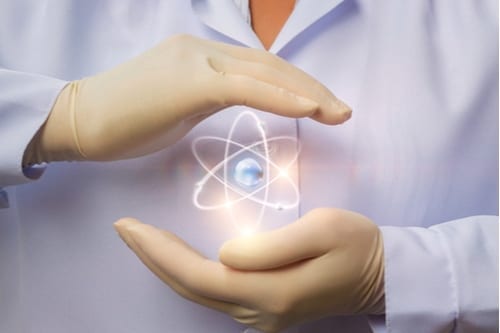 When you think of nuclear energy, you probably envision a massive reactor and the vase-shaped cooling chimneys associated with such structures. These large-scale reactors produce thousands of megawatts (MW) of energy used to power cities and whole regions.

For example, the Darlington nuclear reactor east of Toronto is comprised of four units and a 580 meter long turbine hallway that generates 3,512 MW of power, supplying 20 percent of Ontario’s electricity.

While massive reactors like Darlington produce enough energy to power a province, small modular reactors (SMRs) use the same nuclear fuel on a reduced scale to generate electricity and energy for mining projects or remote communities.

Small modular reactors: How do they work?

While the general public may be unfamiliar with SMRs, they have been around since the conception of nuclear energy — think research and demonstration reactors. Using the same concept of energy generation as their larger counterparts, SMRs are nuclear fission reactors on a much smaller scale.

Nuclear fission is the process of splitting the nucleus of an atom into two or more smaller nuclei. As the atom is split, neutrons and energy (heat) are released. The heat energy generates steam, which in turn powers a turbine generator that then produces electricity.

The electricity generated through nuclear fission is clean because it burns no fuel, thus producing no carbon emissions.

These small nuclear reactors are constructed in a factory using a base design. The modular design allows for them to be deployed independently or as one component of a multi-modular unit.

According to the International Atomic Energy Agency, there are roughly 50 SMR designs being developed around the world. The majority of these SMRs will have a mass production component, with the primary construction of the reactor happening in a controlled factory setting.

Nuclear energy has long been touted as a green energy alternative, but unfortunately due to the quantity of uranium that large-scale reactors use and the complexity of the cooling components of reactors, there have been a handful of incidences where reactors have partially or completely melted down.

Most recent is the Fukushima Daiichi nuclear meltdown of 2011, which ranked as a level seven nuclear disaster, the same ranking as Chernobyl.

However, due to their scale and the small amount of uranium they use, SMRs aren’t even in the same category when it comes to any risk posed by the technology.

As Neil Alexander, president at Bucephalus Consulting, pointed out, although they stem from the same theories, large-scale reactors and SMRs are vastly different.

Alexander has a long history in Canada’s nuclear sector. He led the Sylvia Fedoruk Canadian Center of Nuclear Innovation and was the president of the Organization of Canadian Nuclear Industries.

“I have an analogy that conventional reactors are like dinosaurs, whereas SMRs are like chickens,” he explained. “They are the direct descendant of the technology, but they come in a very different form.”

The analogy works on two levels, representing the distinct lineage of the two technologies and their sheer difference in size.

“Whereas a dinosaur dominates its environment and you wouldn’t want one living nearby, chickens live in the community. It’s also a useful analogy for people in the nuclear industry to recognize that, whereas a dinosaur can tell its environment how it’s going to behave, chickens have to work with the environment. It completely changes the paradigm in terms of the discussion with the public. You can’t bully them into it, you have to make them want it,” he added.

For Alexander, getting the public to understand these fundamental differences between the two is key in helping to get SMRs rolled out.

“My concern is there is a lot of discussion and not a great deal of action. We’ve seen the SMR roadmap being produced by the government, but we haven’t seen the government commit to any follow up to it. This I think is a missed opportunity from a number of points of view,” he said.

“One is, we appear to have a climate crisis — and we have to call it a crisis nowadays — and yet the one thing that we know could actually solve it, nobody is actually committing a great deal of effort to it. So, it’s a lost opportunity from that point of view.”

Not only would SMRs help reduce the amount of carbon emissions and greenhouse gas in the atmosphere, but there is also economic potential in the modular units, especially for whatever country gets ahead of others in manufacturing and adoption.

According to the Canadian SMR roadmap, the market for SMRs is expected to hit C$5.3 billion between 2025 and 2040. Globally, that number balloons to C$150 billion.

When you hear of green energy, the image of wind farms or solar farms may come to mind, and while these are great green alternatives to fossil fuels, they also have a downside.

“There are a whole variety of ways that you can produce electricity that reduce our carbon footprint. Nuclear being one of them. But the world’s facing a lot of other problems as well,” explained Alexander. “One that is obvious and immediate, but people do not talk about very much, is mankind’s footprint on nature, which is expanding dramatically and is giving rise, unquestionably, to the fastest mass extinction that the world has ever experienced.”

Leveling forests or habitats to build massive green energy farms seems counter intuitive and ultimately trades one problem for another.

“Where I think nuclear fits into the picture, it not only produces carbon-free electricity, but it does it from a very, very small footprint,’’ he said. “So, now we can concentrate mankind’s efforts rather than distribute them as we are doing with wind and solar that just takes up huge, huge quantities of land.”

SMRs are a viable solution to the vast majority of the world’s energy problems, although getting that message across is easier said than done.

One thing that everyone does seem to agree on is the fact that Canada has the potential to be the beacon of change that helps make the concept of SMRs less scary and more of a reality.

Canada’s varying geography also lends itself well to implementing SMRs in a variety of ways.

“We are a nuclear nation. We have a sophisticated regulator. We understand the issues, but we also have huge markets for these remote applications and we have smaller grids,” said Alexander.

“In many countries, they’ve used the US system for regulation and it’s very prescriptive; in order to have an innovative reactor, you have to change the prescription, which can take a long time. Whereas the Canadian regulator is based on a system of ‘prove to me that it’s safe and we will allow it to be operated.’”

Alexander stressed that, although the regulatory mechanism is different, Canada’s is not inferior, and it actually lends itself better to collaboration and advancement.

“It is not a lower bar, which is one of the things I keep stressing to people. It is equally as demanding from a safety point of view, but it allows for innovation. So that gives Canada the opportunity to have not only a market, but a way of regulating, which could mean that we could take the leadership position and emulate circumstances that might be repeated in places like Africa, where there could be a huge demand for SMRs, but allow it to be done by a nation first that knows what it’s doing,” he noted.

In part two of the Investing News Network’s “New Nuclear” series, we will examine some of the applications that SMRs can power. Whether it’s a mine near the equator, or a water purification plant in Northern Ontario, SMRs can do it all.

5 responses to “Putting the New in Nuclear: Small Modular Reactors”