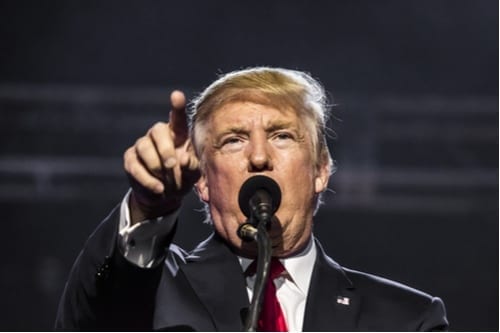 Deciding not to side with the US Department of Commerce, the president has called for a more robust examination of the sector.

After months of anticipation, US President Donald Trump announced last Friday (July 12) that he will not implement a domestic uranium mining quota — at least not yet.

The suggestion for a domestic quota was one of the proposals put forward by the US Department of Commerce (DoC) following its Section 232 investigation into foreign uranium imports.

Concern that shipments of uranium from Russia, Kazakhstan and Uzbekistan might compromise national security was part of the motivation behind the launch of the almost year-long probe.

Deciding not to side with the DoC, the president has called for a more robust examination of the sector.

“At this time, I do not concur with the Secretary’s finding that uranium imports threaten to impair the national security of the United States as defined under section 232 of the Act,” reads his statement.

While he refrained from implementing a quota, the American leader did acknowledge that the US is too dependent on foreign uranium imports for electricity generation, noting that 93 percent of the uranium used in the US comes from outside the country, compared to 85.8 percent in 2009.

The White House statement also mentions that increased uranium production in Eastern European nations has “distorted global prices,” making it harder for domestic producers to afford to mine.

Per Trump’s directions, the country will now establish a body called the US Nuclear Fuel Working Group to further explore the issues plaguing the national uranium sector. The president has mandated that the newly formed group will report back with its findings within 90 days.

US-based miner Energy Fuels (TSX:EFR,NYSEAMERICAN:UUUU), one of the companies that played an instrumental role in getting the DoC investigation launched, had hoped the president would implement an instant domestic production quota that would have ultimately benefited the company. Nevertheless, the company reacted positively to Friday’s news.

“In our Section 232 petition, we asked for relief specific to the uranium mining industry. Not only did the president recognize the threat to national security and the need for relief for the uranium mining industry, he also acknowledged that the national security threat to the whole nuclear fuel cycle, not only uranium miners, must be studied and addressed, in order to revitalize the nuclear energy industry,” CEO Mark Chalmers said in an announcement.

Although the Section 232 investigation’s focus was on imports from Russia and its state-owned entities and allies, uranium producers in Canada and Australia had been concerned that a broad quota would impact friendly imports.

“We are pleased with this decision,” President and CEO Tim Gitzel said. “Uranium supplied by Cameco or Canada for zero-carbon energy generation has never been a threat to US national security, and we worked hard to emphasize that distinction throughout this process.”

The uranium market has been anxiously awaiting the president’s decision, which has kept US utility companies away from purchasing the energy fuel, impeding the ability for spot price growth.

Now that a decision has been passed down, utility companies are expected to make purchases — a move Australian uranium company Boss Resources (ASX:BOE) has been looking forward to.

“Boss is in a very good position to respond as US utilities come back to the market,” noted Managing Director Duncan Craib after the news hit. “We have solid relationships with a variety of US utilities with whom we have been discussing offtake contracts. Australia has been a long-term reliable and important supplier of uranium to the US and this decision will see this continue, underpinning project development in Australia as well as providing foreign investment.”

Even though a domestic production quota was not established, last year the president did implement a “buy American” caveat for all US agencies, including the military and Department of Defense, which he mentioned in his decision.

While uranium companies seem content with the president’s decision for now, market watcher, speculator and Mercenary Geologist Mickey Fulp is disappointed that no concrete measures to shore up domestic uranium production were put forward.

He also pointed to the negative effect the president’s announcement had on the share prices and market caps of American uranium miners and explorers.

“Mining companies lost 25 to 30 percent of their market cap from Thursday (July 11) to Friday and did not recover as of Monday (July 15),” explained Fulp. As mentioned, Friday was the day of the announcement.

Energy Fuels was down by as much as 35 percent following the Friday announcement. Ur-Energy (TSX:URE), the other company that played a pivotal role in spearheading the investigation, also saw its share price affected by the announcement, falling 39.54 percent.

The Investing News Network has spoken with Fulp several times in recent months regarding Section 232, and a domestic quota had seemed inevitable, although the exact percentage was always in question.

And while Friday’s move from Trump sent shares of American uranium companies plunging, US utility companies have emerged unscathed and ready to purchase uranium at a weakened spot price.

As Fulp noted, the utilities, especially those on the east coast, lobbied extremely hard against domestic quotas. The companies did not want higher prices weighing on their bottom lines despite roughly 6 percent of their operating budgets going to purchasing fuel and maintaining reactors.

This concern has been echoed by both Energy Fuels and Ur-Energy.

“US nuclear utilities have been spreading misinformation,” reads a joint statement from the firms released on July 2. “Driven solely by short-term profits, utilities outrageously claim that a modest quota for US uranium will drive nuclear power plants to close — all while several utilities collect hundreds of millions of dollars in taxpayer subsidies.”

The US Nuclear Fuel Working Group will have 90 days to pass down its decision once it convenes. Until then, the global uranium sector is poised for more uncertainty, which does not bode well for the already depressed spot price.