INN spoke to lithium experts about what the future holds for lithium hydroxide versus lithium carbonate demand and prices.

If there’s one thing the lithium space seems to agree on, it’s that demand for the metal will rise significantly over the next decade as electric vehicle (EV) uptake continues. However, whether demand for lithium hydroxide will overtake demand for lithium carbonate is an ongoing debate.

The main reason experts anticipate a potential increase in demand for lithium hydroxide is the push toward cathodes with higher nickel content, namely NCM 811 cathodes, which include eight parts nickel, one part cobalt and one part manganese. These cathodes have a higher density, a longer lifespan and provide a better driving range when used in EVs.

Yet despite speculation that this type of cathode would enjoy quick mass adoption, most analysts agree the reality is a bit different — the transition to NCM 811 is taking longer than expected, with costs and safety being the main challenges.

In 2018, Korean battery makers SK Innovation (KRX:096770) and LG Chem (KRX:051910) announced that they were working on NCM 811 cathode/cells for EVs, but pushed back commercial production during the third quarter, highlighting the difficulties of using new chemistry for batteries.

“Last year, we said the higher-nickel cathodes were going to take longer than what people had anticipated at that point, and that is really what is going to drive the shift to lithium hydroxide,” Benchmark Mineral Intelligence Head of Price Assessment Andrew Miller told the Investing News Network (INN).

Miller said some of the momentum toward high-nickel cathodes has been coming out of the industry during the first half of this year. 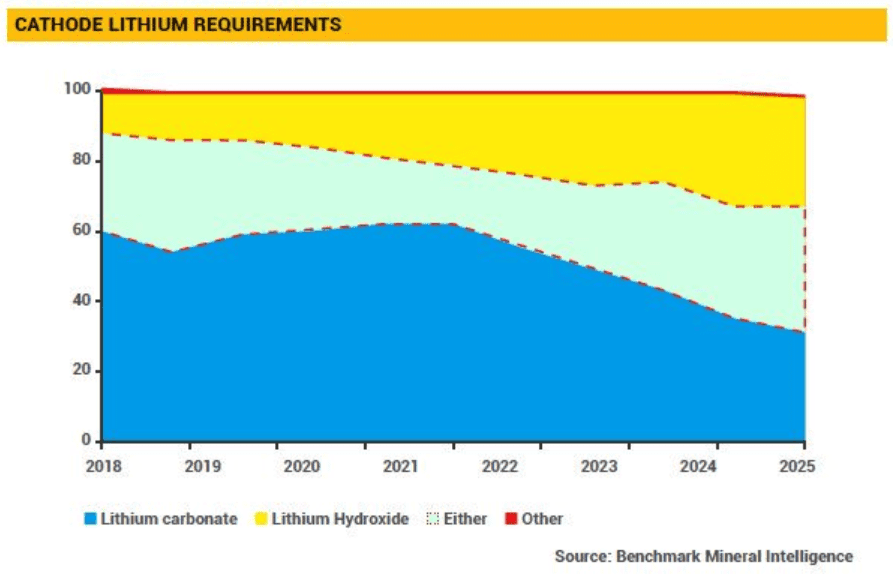 But the move toward NCM 811 is happening, with China’s CATL (SZSE:300750) beginning mass production of high-nickel cathodes in April and SK Innovation set to start production in Q3 of this year.

According to Adamas Intelligence, NCM 811 currently claims just 1 percent of the passenger EV market by gigawatt hours, but saw a blistering 251 percent increase in deployment year-over-year in April, with more growth seeming to be around the corner — “just how much and how fast remains a hot topic for debate.”

If higher-nickel cathodes are the way forward, will lithium hydroxide demand overtake lithium carbonate? This has been an ongoing question in the lithium space, with diverse views on which chemical will reign in the space.

“I think that it is going to take time before you have the NCM 811s and the NCAs take a more dominant position … There are a lot of technical challenges and also economic challenges as well in terms of bringing the cost down,” Miller said.

During the second half of the year, Miller expects to see healthy growth for both lithium carbonate and hydroxide, with major growth for hydroxide expected around 2022 to 2023.

For battery metals expert Chris Berry of House Mountain Partners, the narrative around hydroxide as “the only way” forward has collapsed for various reasons, including the changes in subsidies in China.

“We know the market is going to get a lot bigger, we know hydroxide is going to grow faster than carbonate, but my personal view is that by 2025 carbonate is still the dominant lithium chemical in the market,” he told INN. “I think you want to be looking at what the market looks like in 2025 to 2030.”

Similarly, Joe Lowry of Global Lithium said he expects demand for carbonate to remain larger than demand for hydroxide by 2025. The struggles seen in the implementation of NCM 811 mean there will be even more use of NCM 622 or it will take longer for NCM 811 to play out.

“In that scenario, when there’s a choice between carbonate and hydroxide, carbonate is simply easier to use because it doesn’t have the the industrial hygiene problems associated with hydroxide,” he told INN. “I believe both grow well, hydroxide at a higher rate but carbonate still bigger by 2025.”

Chile’s SQM (NYSE:SQM) has a 50 percent stake in a hard rock lithium project, Mount Holland, which it will now develop with diversified company Wesfarmers (ASX:WES,OTC Pink:WFAFF) after the AU$776 million Kidman Resources (ASX:KDR) takeover is complete.

As for Chinese lithium producers, later this year Tianqi Lithium (SZSE:002466) is set to start selling lithium hydroxide from a new processing facility in Kwinana, south of Perth.

“Lithium hydroxide has picked up quite a lot, with the main driver being EVs … but we think lithium carbonate will still account for a big portion if not the majority (of demand) going forward,” Tianqi President Vivian Wu told reporters ahead of the Lithium Supply & Markets Conference earlier in June.

Meanwhile, last September, China’s Ganfeng Lithium (OTC Pink:GNENF,SZSE:002460) said it will invest in its Mahong plant to add a 25,000 tonne per year battery-grade lithium hydroxide project. The company, whose primary source of lithium raw materials is Mount Marion in Western Australia, has signed a memorandum of understanding on long-term lithium supply for battery cells with Volkswagen (OTC Pink:VLKAF,FWB:VOW).

The German carmaker said at the time that it was interested in lithium extracted from mining for lithium hydroxide, because it is commercially more attractive, more stable to extract, easier to scale and generally more sustainable.

Interestingly enough, Livent (NYSE:LTHM), which spun out of FMC (NYSE:FMC) last year, has seen weaker demand for its lithium hydroxide, with CEO Paul Graves saying he regrets that Livent moved so quickly to focus on hydroxide instead of balancing production with carbonate.

“There’s no doubt the shift to hydroxide is happening across the industry … but it would have been nice to be a little more diversified with more carbonate in the mix,” he said.

At the end of the day, with lithium demand expected to grow by over eight times, the debate as to whether demand for lithium hydroxide will overtake lithium carbonate loses steam.

Where are lithium carbonate and lithium hydroxide prices headed?

Looking over to how prices will perform going forward, many believe price convergence is on the horizon.

According to Miller, the premium for hydroxide remained last year because of how lithium hydroxide was being produced, and also because of the excitement around the switch to higher-nickel cathode batteries, which, as mentioned, predominantly require that type of lithium.

“This year and next year, we still think there will be some premium for hydroxide, but the narrowing of that premium is something to watch in the coming months,” he said.

Daniela Desormeaux, founder and CEO of signumBOX, told INN that prices will reach a balance at some point because of the cost.

“Since lithium hydroxide will grow faster, and current supply is more tight, that’s why we believe this premium will remain (in the short term), but in the long run they should be balanced.”

For William Adams, head of base metals and battery research at Fastmarkets, hydroxide prices have been converging down towards carbonate prices — there’s still a difference, but the gap has narrowed.

“Over the next few years, I think that because there’s more lithium hydroxide supply coming on stream, we are going to see that gap close further — it might even go to level,” he added.

Lowry also pointed to hydroxide prices coming down faster than carbonate, with the lithium expert expecting prices to reach parity within two years.

He said that if projects such as Albemarle’s hard rock Wodgina project move forward and are successful, there will be an oversupply of hydroxide relative to carbonate, with hydroxide ultimately going below carbonate pricewise for two reasons.

Whether the cathode choice involves the use of more lithium hydroxide or carbonate, one thing remains certain — the growth forecasts for the raw materials used in lithium-ion batteries continue to increase.

And for Miller, unless money starts going into the lithium industry now, by the 2022 to 2023 period the market could start to see massive deficits emerge again.

“And this deficit will not be the size of the 2015 one, when there was moderate growth in the sector. This is going to happen when you really start to see an uptake in the use of lithium-ion batteries,” he added. 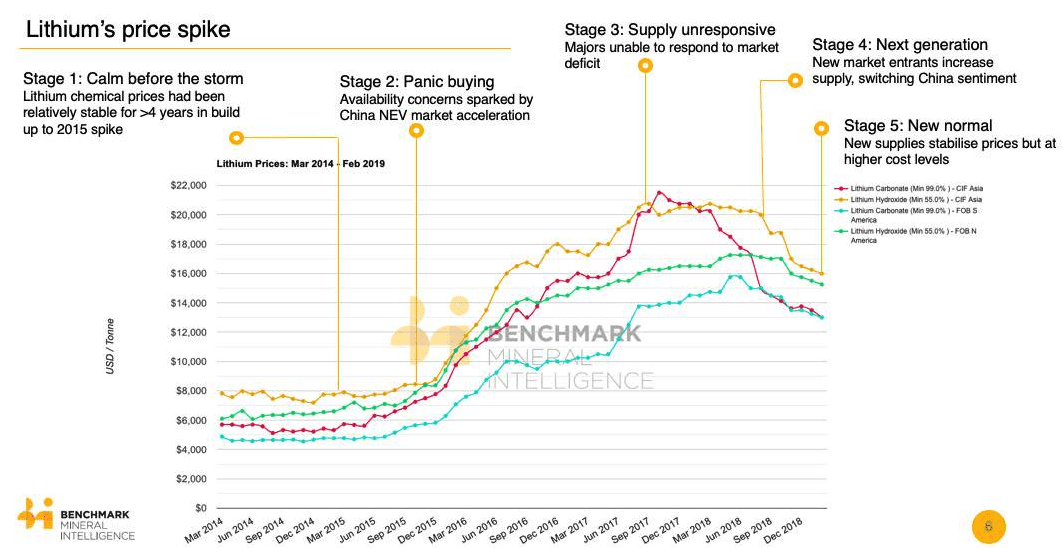