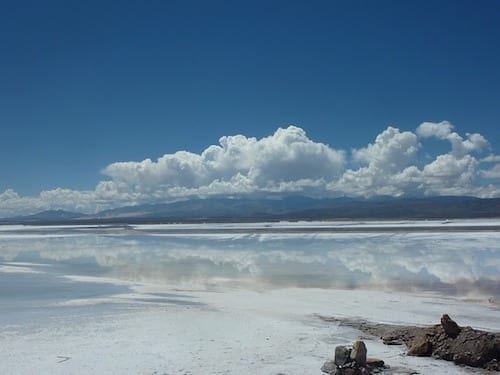 Lthium is mined from three types of deposits: brines, pegmatites and sedimentary rocks. Here’s a look at lithium brine deposits.

As lithium demand continues to increase due to its key role in the lithium-ion batteries used to power electric vehicles, it’s important for investors interested in the mineral to have a look at the different type of lithium deposits around the world.

A University of Michigan study published in the Journal of Industrial Ecology explains, “The feasibility of recovering lithium economically from any deposit depends on the size of the deposit, its lithium content … the content of other elements and the processes that are used to remove the lithium-bearing material from the deposit and extract lithium from it.”

Lithium from brine deposits has gained more and more interest in recent years on the back of a veritable lithium rush in Nevada. This has largely been driven by Tesla’s (NASDAQ:TSLA) lithium-ion battery gigafactory, which is just the first of many to come. Nevada is also home to Albemarle’s (NYSE:ALB) Silver Peak lithium mine, the only producing lithium brine operation in the US.

Read on for a brief look at lithium brine deposits. You can also click here to read our overview of lithium pegmatite and sedimentary deposits.

An overview of lithium brine deposits

Generally, lithium extraction from brine sources has proven more economical than production from hard rock ore. While hard rock lithium production once dominated the lithium market, the majority of lithium carbonate is now produced from continental brines in Latin America. This is primarily due to the lower cost of production. That said, Australia was still the world’s largest lithium producer in 2018 in terms of mine output, and most of that came from the Greenbushes hard rock lithium operation.

There are three types of lithium brine deposits: continental, geothermal and oil field. The most common are continental saline desert basins (also known as salt lakes, salt flats or salars). They are located in areas with geothermal activity and are made up of sand, minerals with brine and saline water with a high concentration of dissolved salts. A playa is a type of brine deposit whose surface is composed mostly of silts and clays; playas have less salt than a salar.

Lithium brine deposits represent about 66 percent of global lithium resources and are found mainly in the salt flats of Chile, Argentina, China and Tibet.

This is the most common form of lithium-containing brine. The majority of global lithium production comes from continental lithium brine deposits in what is known as the “Lithium Triangle” — a region of the Andes mountains that includes parts of Argentina, Chile and Bolivia.

The best example is the 3,000 square kilometer Salar de Atacama in Chile, which has an average lithium concentration of about 0.14 percent — the highest known — and estimated lithium resources of 6.3 million MT. Two of the world’s leading lithium producers, Sociedad Quimica y Minera (NYSE:SQM) and Albemarle, operate on the Salar de Atacama.

Bolivia is home to the world’s largest deposit of lithium, the Salar de Uyuni, which reportedly contains up to 50 to 70 percent of known world reserves. However, the odds of this continental brine seeing commercial production are low for several reasons, including the fact that Bolivia is keen on keeping its natural resources under state control.

Also, the deposit has magnesium-to-lithium ratios that are three times higher than those at Atacama, making it more difficult and costly to refine salt into lithium carbonate. Finally, the evaporation rate at Uyuni is only 40 percent of that at Atacama, which means refining would be more time consuming.

Not to mention, the Salar de Uyuni is a major tourist attraction — environmental, cultural and economic concerns from locals who depend on the salt flats for tourism could result in a great deal of red tape.

Geothermal lithium brine deposits make up roughly 3 percent of known global lithium resources and are comprised of a hot, concentrated saline solution that has circulated through crustal rocks in areas of extremely high heat flow and become enriched with elements such as lithium, boron and potassium. Small quantities of lithium are contained in brines in New Zealand, Iceland and Chile.

The Salton Sea in Southern California is the best-known example of a geothermal lithium brine deposit. Simbol Materials, a private California-based company, had plans to produce high-purity lithium carbonate from discharge brine borrowed from geothermal plants operating on the Salton Sea.

It would have used a unique reverse-osmosis process to eliminate the need for solar evaporation, making operations more timely and cost effective.

For over a year and a half, Simbol validated the process at its demonstration plant in California, and said in January 2015 that it had plans to begin construction of a large-scale plant. However, operations came to an abrupt halt when the Desert Sun reported that Simbol had fired 38 workers from its demonstration plant at the start of February 2015.

Controlled Thermal Resources acquired Simbol’s technology and is working on picking up where Simbol left off. According to its website, the company is in the “advanced stages of commencing development of a new 280 MW geothermal power project within the Salton Sea area.”

Aside from those activities, PurLucid Treatment Solutions has reportedly developed technology that is normally used to extract lithium from oil field brines, and has adapted it for geothermal brines. It is thought to be an environmentally friendly option.

Lithium brine deposits can also be found in some deep oil reservoirs, accounting for 3 percent of known global lithium resources. The Smackover Formation on the US Gulf Coast is believed to hold an estimated 1 million MT of lithium resources at an average concentration of about 0.015 percent. North Dakota, Wyoming, Oklahoma, Arkansas and East Texas are home to oil field brines with concentrations as high as 700 milligrams per liter, according to geologist Keith Evans.

Securities Disclosure: I, Priscila Barrera, hold no direct investment interest in any company or commodity mentioned in this article.