What zinc trends rocked the market in 2019? We run through what happened to the metal this year, from price activity to supply pains.

Zinc had a hard 2019, with prices steadily decreasing after a short-lived spike during Q1.

The topic on everyone’s mind within the zinc sphere was the shift from miners to smelters as a driving influence over the metal’s cost, with a growing number of miners and a dwindling number of smelters.

Zinc started the year off in January trading for US$2,460 per metric ton, but by December 11 the metal had dropped by 9.6 percent to trade for US$2,221. Between those two dates, zinc’s price swung up and down, with highs and lows surpassing both of those prices.

As noted, the metal declined for the most part, and is on track to close off the year in a worse position than it started. Read on for a quarter-by-quarter look at zinc’s performance in 2019.

Q1 was an exciting one for zinc, with the metal’s price increasing by 22 percent over the course of the three months. Zinc began the year trading for US$2,460 and quickly began to pick up heat, hitting its peak right before the end of the quarter, when it traded for US$2,999.

News from zinc companies began popping up early on in 2019, with Vendetta Mining (TSXV:VTT) releasing a preliminary economic assessment for its Pegmont project in Queensland. Similarly, Ascendant Resources (TSX:ASND,OTCQX:ASDRF) updated the resource estimate for its Lagoa Salgada (salt lagoon) project in Portugal, increasing its resource base.

The price did occasionally fall, but these dips were typically by about US$100 to US$200 and zinc quickly recovered. FocusEconomics economist Javier Colato previously told the Investing News Network (INN) that the spike that occurred in late Q1 was mainly due to tightened supply.

“Zinc prices trended upwards through April mainly as a result of supply constraints. Stockpiles of the base metal at London Metal Exchange (LME) warehouses fell to their lowest levels in over two decades during this period, while inventories at the Shanghai Futures Exchange also remained historically low.”

The spike that ended off the first quarter carried over into Q2, with zinc prices reaching US$3,016 on April 1. However, this spike ultimately didn’t last; following April 12’s US$3,008 price, zinc began to fall and never surpassed the US$3,000 point again.

Q2 also brought efforts made by Trafigura Group to save zinc smelter Nyrstar (OTC Pink:NYRSY,EBR:NYR) from bankruptcy by purchasing shares and becoming a major shareholder.

As discussed, zinc’s shift in price represents a change in focus from miners to smelters.

Speaking to INN earlier this year, Helen O’Cleary of CRU Group stated that the zinc spike could be explained by falling LME stockpiles.

“There was a concerted effort to reduce LME stocks to exacerbate the appearance of refined market tightness,” O’Cleary said at the time.

“The sharp fall in LME stocks is partly technical,” she added, citing the fact that demand growth had been lackluster and market participants seeking the metal weren’t reporting any shortfalls in supply.

“Demand weakness in China and in much of the world ex-China suggests that the smelter bottleneck will be on the concentrate side — (meaning) not enough smelter capacity to treat rapidly increasing concentrate supplies — rather than on the demand side,” she added.

This forecast proved to be true, with reports later in the year stating exactly that: There was an increase in zinc supply without the capacity to refine it.

Zinc’s price continued to falter during Q3, which is also the quarter featuring the metal’s yearly low — US$2,210 on September 3. Over the course of three months, zinc’s price fell by 6.66 percent. 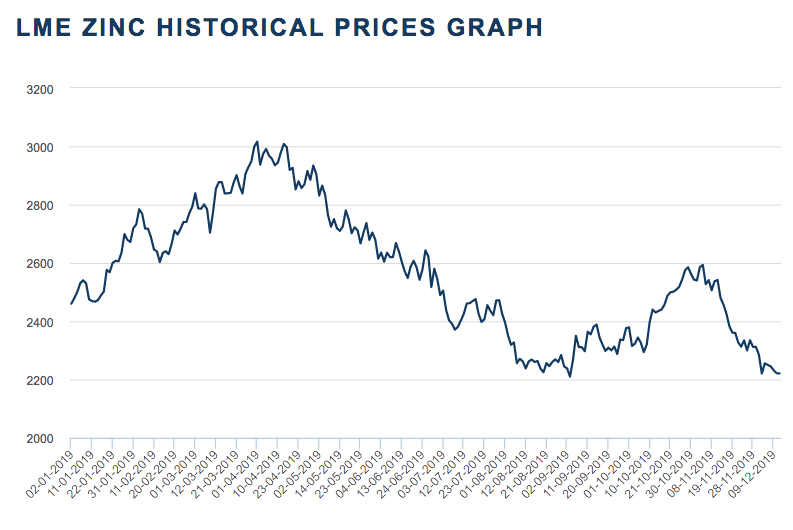 During Q3, Nyrstar shareholders ended up taking Trafigura to court, stating that the firm had undue influence on Nyrstar’s operation and had steered the company wrong, resulting in it losing significant funds since 2016. Trafigura declined to comment at the time.

Meanwhile, Platina Resources (ASX:PGM,OTC Pink:PTNUF) entered a joint venture agreement with Blue Moon Zinc (TSXV:MOON,OTC Pink:BMOOF) to earn both operatorship and a majority interest in the Blue Moon zinc project in the US.

Zinc was further weighed on by the intensification of the trade conflict between Washington and Beijing.

“This has dampened the global growth outlook and bruised global manufacturing activity, thus clouding the demand outlook for base metals and driving the overall bearish sentiment recently, including for zinc,” FocusEconomics analysts stated in a September report.

Unlike the previous two quarters, Q4 saw some brief periods of growth for zinc, although the quarter still ended on a loss, with the metal decreasing by 6.6 percent between October 1 and December 10.

The last three months of 2019 have been eventful for zinc. Nyrstar announced that it will shut down its Langlois zinc-copper mine, citing a study that found it to be “uneconomic.” It was also during the fourth quarter that many companies and analysts re-upped their concerns about the high treatment charges (TCs) and refinement charges that now plague the zinc industry.

“TCs are expected to remain high, and annual benchmarks are going to be trending higher probably for the next few years,” said Oliver Nugent, an analyst at Citi (NYSE:C) in London. “Mine supply should be outpacing smelter capacity and rebuilding concentrate stocks for the next couple of years.”

In FocusEconomics’ December forecast report, analysts polled predict that the price of zinc will gain some ground in the short term amid continued low inventories in the global zinc market.

“However, muted global industrial production and an uncertain economic backdrop remain key downside risks to the outlook,” the analysts said.