Here’s an overview of the main factors that impacted the zinc market in H1 2020, and what’s ahead for the rest of the year.

After a disappointing 2019, zinc wasn’t expected to have a much better 2020, but the coronavirus impact further exposed the base metal weak fundamentals during the first six months of the year.

Zinc followed the path of most commodities in Q1, with prices plummeting as lockdowns and virus containment measures hit global demand. The second quarter saw zinc slowly recover, with uncertainty still on the cards.

Compared to copper, which is down just 2 percent, zinc has been one of the weakest base metal performers so far this year, dropping about 11 percent — but this was expected, Karen Norton of Refinitiv said.

“This fits in with our view that zinc had its day in the sun and that its fundamentals were already deteriorating towards the end of last year, while copper was starting to head in the opposite direction with deficits beckoning further ahead,” she told the Investing News Network (INN). 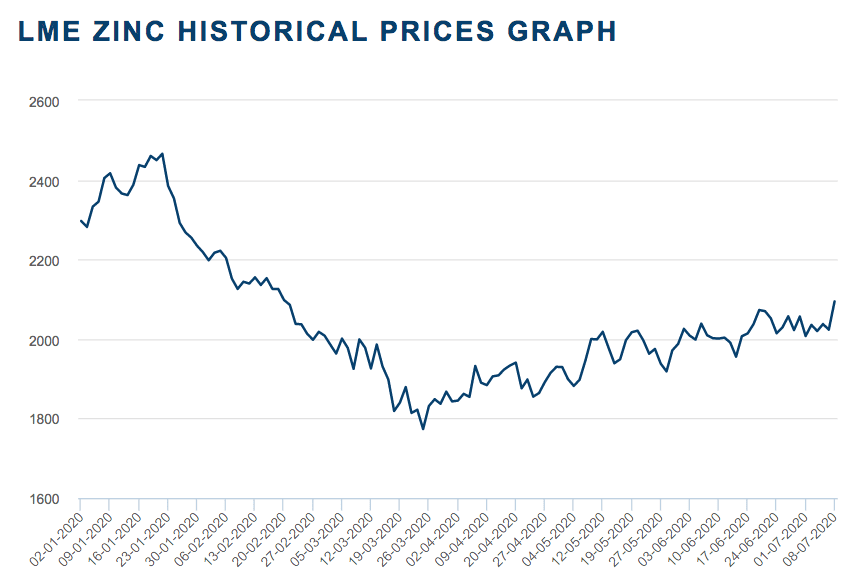 Looking at the second quarter, CRU’s Helen O’Cleary said zinc’s performance was slightly stronger than expected in Q2 given its weak fundamentals.

The second quarter was a turning point for zinc, when prices started to slowly show some recovery, breaking the US$2,000 per tonne once again to trade at its current level of US$2,094 per tonne.

“The zinc price has made decent gains in Q2 and has rallied more quickly than we previously anticipated,” Dan Smith, managing director at Commodity Market Analytics, told INN.

In Q2, the zinc price found support as the Chinese economy ramped up and as supply fell due to COVID-19 restrictions and/or price related issues, according to Ryan Cochrane of Open Mineral.

“I was surprised slightly at how well the zinc price held up,” he told INN. “Fundamentals deteriorated very quickly from March onwards.”

For Norton, the current price level is not justified by zinc’s fundamentals. “We believe its position above US$2,000 per tonne is tenuous,” she said.

The coronavirus pandemic has hit all markets and supply chains around the world this year, and zinc has been no exception.

Major zinc-producing countries such as Peru have seen governments take strict measures to contain the virus, with lockdowns hitting supply of the base metal. Macquarie Bank estimates that over 500,000 tonnes of production have been lost so far, representing more than 4 percent of global output.

For Cochrane, Latin America has not yet passed the worst of the first wave of the coronavirus.

“So in terms of exported zinc concentrate, what happens in Mexico, Peru, Bolivia is still a key driver to watch,” he said. “It’s likely there will be a gradual improvement in supply, but (I am) not expecting a rapid rebound by any means.”

In 2019, Peru produced 1.4 million tonnes of zinc, with Mexico and Bolivia producing 690,000 tonnes and 460,000 tonnes respectively, according to the US Geological Survey.

“Zinc mine supply is coming back surprisingly slowly because of the lingering impact of the COVID-19 shutdowns in places like Bolivia, Mexico and Peru,” Smith said. “Peru is a particular challenge at the moment and a return to normality still looks to be a long way down the road.”

For its part, CRU has increased its mine disruption allowance in Q3 to allow for the potential impact of a second wave of coronavirus. However, the firm is still expecting the market to remain in oversupply.

“We are expecting a refined surplus of around 0.5 Mt in 2020 based on our expectation that the impact on demand will continue to be more severe than on supply,” O’Cleary told INN.

Smith also said the zinc market looks set to be oversupplied this year. “But we see this as a temporary phenomenon,” he said. “With demand now on an upward track and supply constrained in South America we expect oversupply to rapidly diminish in the remainder of this year.”

Norton agreed, saying the supply disruptions seen in 2020 will not be enough to avoid oversupply in the market this year. For the expert, Q3 is expected to see fewer mine supply losses than the previous quarter.

“We are currently forecasting that Q2 will bear the brunt of losses in zinc mine production this year, but Q3 will still show a decline year-on-year of around 50,000 tonnes, compared with about 280,000 tonnes in Q2,” Norton told the Investing News Network.

Refinitiv’s Metal Production Database forecasts a 2.6 percent decline in mine output from last year to 12.56 million tonnes, or a fall of almost 350,00 tonnes. That includes pre-COVID-19 price-related shutdowns and the previously flagged closure of Vedanta’s (NYSE:VEDL) Skorpion operation in Namibia.

“We do not rule out further price-related cutbacks at the margin, but not to any degree that would make a further significant dent to zinc production,” Norton said. “For zinc, the COVID-19 impact may have accelerated the process of curtailing output in a deteriorating market environment.”

Cochrane added that it is very likely the refined market will be oversupplied due to the acute demand shock faced in H1.

“Smelters have not cut output to the same degree that refined metal demand has fallen. Where the market has shifted dramatically is on the concentrate balance,” he said.

In terms of refined output, mine losses have tightened the market, and smelters in top producer China have brought forward maintenance shutdowns to help mitigate the issue. However, Chinese production, and by extension global output, is still seen growing for the year as a whole, Norton explained.

Looking forward, the Refinitiv senior analyst believes the impact on zinc mine output may be temporary and confined to this year if prices rebound sufficiently.

Looking at demand in the coming months, stimulus in China will be critical to the overall picture for zinc, and is expected to benefit the metal during the second half. The Asian nation is the world’s biggest consumer of the base metal at almost half of total global demand.

“But that is not without some degree of caution, especially with the authorities there voicing concerns over debt risks and making clear that stimulus will be reined back in due course,” Norton said.

For Smith, the quarter ahead is likely to be a much stronger period for demand, particularly in China.

“In the country car sales have rebounded and improved construction activity will help drive further growth,” he added.

Governments have been forced to step in with aggressive measures to support the economy, targeting sectors such as construction and infrastructure. “This will boost steel and zinc demand in the year ahead as investment translates into building of schools, hospitals and other major infrastructure projects,” Smith said.

Cochrane is also expecting to see an uptick in demand in the next six months of the year.

“(I) would certainly expect a gradual improvement in demand as economies gradually ease lockdowns. Particularly from Europe and North America and ongoing improvements in China,” he said.

For Cochrane, smelter appetite for concentrate will continue to provide a decent indication on where first-use demand is.

Another key factor that could impact demand is the potential for a second COVID-19 wave, which might threaten the current recovery.

“Having come out of lockdown, end-use consumption in China had already been picking up ahead of the start of H2, boosted among others by infrastructure orders and higher car and real estate sales,” Norton said. “China’s economy may be in recovery mode, but the seasonally slower period for demand is here, when construction projects tend to slow, so that will put a bit of a brake on things.”

Additionally, China’s zinc demand is also dependent on exports of zinc-containing products, which means that economic recoveries in other major economies will also be key.

“Operating rates at galvanizers in China have been improving in the last couple of months, but despite recent optimism regarding US investment in infrastructure construction, China’s export orders for galvanized zinc products and other zinc products remain slow,” Norton said.

CRU’s O’Cleary is also expecting a partial recovery in zinc demand in Q3.

“In China, the outlook is relatively positive although there are still headwinds from weak export markets. In ex-China there is still a lot of uncertainty around how strong the pick up will be.”

Looking at prices for the next few months, CRU Group forecast zinc prices will average around US$2,000 per tonne for the third quarter. Commodity Markets Analytics’ Smith, on the other hand, expects prices to rally about 7.5 percent in Q3.

For the expert, all eyes will be on virus-developments and politics for catalysts that could impact the space.

“Assuming we avoid a second peak of infections, the markets will start to focus more on the China-US trade war and the likelihood here is that continued progress will be made, which will lift zinc prices and risk appetite more generally,” he said. “There is also potential for a more disciplined approach to emerge from the major zinc producers, who may decide to cut volumes in an attempt to boost prices.”

For investors following the zinc market closely, Cochrane said there are a number of factors to keep an eye out for as the second half of the year kicks off.

He said investors should expect mine supply numbers in Q2 to be very weak, and should anticipate a continued lag effect of “bad” data.

“This should keep markets volatile as bad news in the rearview mirror depresses confidence,” he said. “But zinc prices likely bottomed in mid-late March.”