Lead had a tough 2018, but what’s the lead outlook for 2019? Read on to find out what analysts had to say about the market.

In 2018, lead took on much of the same calamity that its fellow base metals endured in the face of dismal investor sentiment caused by the US-China trade war.

Analysts are predicting that 2019 will hold even lower prices for lead as supply deficits are plugged by existing stockpiles of the metal. 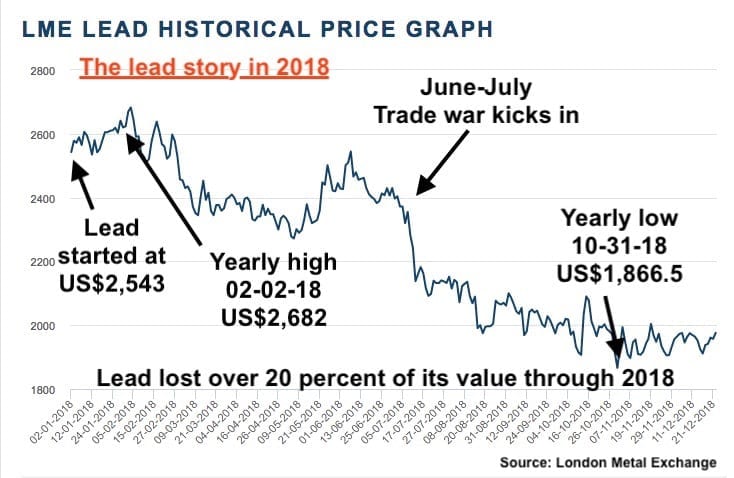 The highs of early 2018 were a continuation of a steadily increasing lead value from June 2017 — a year when the lead price never fell below US$2,000. The fall for lead that took place from February 2018 onward was the primary trend of the year.

Neil Hawkes, lead market analyst at CRU Group, said that while analysts had predicted that the base metal would decline in value, “the scale of the price decline surprised us (along with everyone else!).”

Hawkes said that the main “bearish drivers” of the lead price in 2018 were “broader ones of renewed strength in the US dollar (and US economy, rising US interest rates) alongside growing concerns over the impact of US-Chinese trade tariff escalation on raising inflation and dampening future economic growth and metals demand growth.”

He said that the biggest news of 2018 was a two-fold development wherein an expected rise in lead mining failed to eventuate “as several key mines underperformed.”

Secondly, Hawkes added, “the scale of disruption to the Chinese lead supply chain due to ongoing environmental and safety checks was greater than expected, even eclipsing markedly slower Chinese lead demand (weaker automotive, e-bike and telecom sectors) to lift Chinese lead prices to open the arbitrage opportunity to import more lead from overseas.”

Disruption didn’t lead to increased prices though. “The inescapable bearish truth in the lead story this year has been that there has been no shortage of metal inside or outside China, with any gaps in supply from fresh lead production continuing to be met from drawing down previously built lead stocks.”

“The key trend to watch unfold in 2019 is the gathering speed and scale of lead mine production as primary supplies finally respond to previously attractive market conditions,” said Hawkes.

“Amid no better than steady lead demand growth and steady secondary lead production (recycling lead-acid battery scrap), higher primary lead supplies will be the difference in pushing the global lead market from the widening deficit over the last three years back into balance or even a small surplus.”

And it’s here that the battery metals narrative makes its way into lead. Hawkes said that for the base metal, the rise of the lithium-ion battery and its use in electric vehicles is solidifying as a real factor in lead prices.

“[The] main bearish concern for the lead market, other than rising mine production, is the longer-term threat to lead-acid battery usage in both automotive and industrial applications from lithium ion.”

He added that “CRU still sees room for both battery chemistries to grow alongside each other, but the speed and scale of penetration of lithium-ion batteries into lead-acid battery market share could yet surprise on the upside.”

As Hawkes noted, higher lead production faltered through 2018, meaning that there was a shortfall between production and consumption, as noted in the International Lead and Zinc Study Group’s November report. It states that “world refined lead metal demand exceeded supply by 110,000 tonnes during the first nine months of 2018,” drawing down on total world stockpiles by 49,000 tonnes.

Hawkes said that key companies and mines to watch in 2019 are Goldcorp’s (TSX:G,NYSE:GG) Penasquito mine in Mexico, Vedanta’s (NSE:VEDL) Indian mines, silver-focused (and therefore lead-producing) Fresnillo (LSE:FRES) and its Mexican operations, as well as Glencore’s (LSE:GLEN) mines in Australia: Mount Isa and McArthur River.

“There are also some big ownership changes, with JCI (NYSE:JCI), the world’s leading automotive lead-acid battery maker, recently sold to Brookfield Business Partners; and Eco-Bat, the world’s largest refined lead producer, likely to change hands in the near term in a debt-for-equity deal connected to a lawsuit against the company’s owner.”

If that isn’t enough drama, he added that Aqua Metals (NASDAQ:AQMS), which has an up-and-running lead recycling facility in Nevada, and LeadFX (TSX:LFX), which has a proposed lead refinery at an idled mine site in Western Australia, “[are] both struggling to commercialize new hydrometallurgical technology to recover lead” (from scrap at Reno and from mining at Paroo Station).

“Lead-specific factors aside, investors should keep an eye on the broader metal price drivers that have pushed and pulled LME lead prices around in 2018,” said Hawkes.

“Namely a further escalation (bearish) or hopefully de-escalation (bullish) in US-Chinese trade tariff wars and how much longer renewed US dollar strength can last. Price movements in other LME metals, particularly LME flagship copper and sister mining metal zinc (both expected to fall in 2019), will also influence lead price direction,” he said.

Over at FocusEconomics, analysts polled were a mixed bag on prices.

“Improved supply and demand dynamics in winter months and still-solid demand for lead-heavy vehicle batteries should support lead prices in the coming quarters. Moreover, the recent easing in tensions between the US and China could bode well for prices going forward,” the analysts said.

For 2019 as a whole, the analysts posted a consensus forecast of US$2,221 through the year, with the lowest forecast coming from Liberum Capital, which predicts a price of US$1,834. The most bullish prediction is from Fitch Solutions, at US$2,500.

Ways to Invest in Lead

Galena Mining Ltd. (ASX: G1A) announces achievement of the key objectives from the 2020 Abra Drilling Program and has subsequently completed an updated JORC Code 2012 Mineral Resource estimate for the Abra Base Metals Project located in the Gascoyne region of Western Australia.

Galena Mining Ltd. (“Galena” or the “Company”) (ASX:G1A) announces achievement of the key objectives from the 2020 Abra Drilling Program and has subsequently completed an updated JORC Code 2012 Mineral Resource estimate (“April 2021 Resource”) for the Abra Base Metals Project (“Abra” or the “Project”) located in the Gascoyne region of Western Australia. The April 2021 Resource has been independently prepared by Optiro Pty Ltd (“Optiro”).

Managing Director, Alex Molyneux commented, “The objectives associated with the 2020 Abra Drilling Program were successfully completed. The Project now has over 100 kilometres of drilling in its database, and the geological confidence and understanding of the deposit continues to improve. Almost all of the new holes were drilled within the previous Mineral Resource envelope and over 75% of those holes achieved expected or better results. This Mineral Resource update will now feed into an optimised mine plan, and mine development will allow for underground drilling to continue Resource development, particularly the conversion of significant Inferred Mineral Resources associated with the Core Zone
mineralisation, which remains open in several directions and also hosts the interpreted copper-gold zone.”

Galena Mining CEO Alexander Molyneux is confident that the company has more than one reason to welcome investors to the next phase of the program.

After successfully completing the fully funded 2020 Abra drilling program, Galena Mining (ASX:G1A) CEO and Managing Director Alexander Molyneux is confident that the company has more than one reason to welcome investors to the next phase of the program.

“The program was successful in terms of infill drilling,” Molyneux said. “We can say that 75 percent of the 57 holes either met or exceeded expectations compared to the previous resource model. I think that’s pretty positive. In terms of targeting metal-rich zones, we had two zones where we found extremely good cumulative grade and thickness of lead-silver.”

The Abra base metals project is a globally significant lead-silver project located in the Gascoyne region of Western Australia. It is fully permitted and construction work has already begun.

“We are 15 months away from the first production. Once we’re producing at a steady state, we have a projection to make AU$114 million a year,” Molyneux said. “And when a company has already eliminated the funding risks, it’s an exciting time for investors to join the story.”

Galena Mining Ltd. announces the outstanding result from drill-hole AB195, drilled as part of the recently completed 2020 Abra Drilling Program and as the first ever hole drilled specifically targetting the interpreted copper- gold zone at the Abra Base Metals Project.

Galena Mining Ltd. (“Galena” or the “Company”) (ASX: G1A) announces the outstanding result from drill-hole AB195, drilled as part of the recently completed 2020 Abra Drilling Program and as the first ever hole drilled specifically targetting the interpreted copper- gold zone at the Abra Base Metals Project (“Abra” or the “Project”).