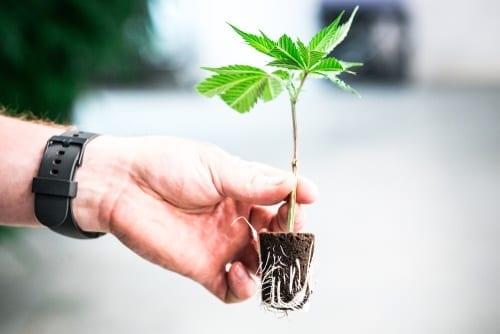 Innovations are changing how companies grow cannabis, from advancements in greenhouse technology to aeroponic grow operations, but to really produce superior cannabis strains companies are turning to a proven approach in the agricultural industry: tissue culture propagation.

The ever-expanding global market for both legal recreational and medical cannabis has prompted commercial cannabis cultivators to look for more advanced cannabis grow methods with the ability to produce high volumes of clones while maintaining genetic continuity and preventing against disease.

Traditionally, cannabis propagation is carried out either by seeding or by cloning from cuttings. The seed route is time-consuming, carries a high degree of uncertainty as to output, and doesn’t allow for much control over cannabis genetics. Although a big advancement overseeding, conventional cloning comes with its own host of problems, including the threat of disease and the loss of desired phenotypes.

While the science behind tissue culture propagation was commercialized several decades ago and is now widely used across the agricultural sector, it may well be a transformative approach to growing cannabis. There are several benefits to tissue culturing vs the traditional methods. The cannabis growers that can successfully implement tissue culture propagation into their cultivation practices may have an advantage in a market that’s experiencing increasing demand for consistent, high-quality products.

Next Green Wave (CSE:NGW, OTCQB:NXGWF) is a vertically integrated seed to consumer producer and reseller of cannabis products and is building a world-class business and innovating a premium portfolio of brands in California.Send me an Investor Kit

Only the female marijuana plant is capable of producing saleable cannabis flower. But, let your females mature along with males in a crop and you’ll get a seedy batch of blah instead of the sticky blanket of crystal resin that holds all the rich terpenes and cannabinoids that makes the plant so valuable for both recreational and medical use.

Conventional cannabis propagation, or what’s more commonly called cloning, uses cuttings from one plant (known as the mother plant) to create new plants that are clones of—genetically identical to—the original plant. Compared to seeding, cloning can cut weeks off of production time and ensure an entire crop of all-female, genetically uniform cannabis plants with desired traits. This uniformity is even more critical in a legalized commercial market in which both regulators and consumers demand consistent quality and safety in their cannabis products.

While cloning has many positives over traditional seeding, especially in commercial agriculture, there are some drawbacks to this method when growing cannabis. One problem is genetic mutation. Even with the most stringent environmental controls and pest management systems, the process of cloning is prone to carrying viruses, mold, other diseases and pests into the next generation.

Another problem is genetic mutation. Mother plants must be meticulously cared for and kept in a constant vegetative state to keep producing clones. Even under the best-controlled conditions, mother plants can become stressed, which can negatively impact plant quality and harvest yield. Because the growing environment can have such a big influence on a plant’s phenotype, once fully grown, a clone may not have the same characteristics as the mother plant. This can result in further phenotype variations in later generations that make it challenging to ensure the genetic integrity of the strain across future crops.

In addition, conventional cloning is limited by the number of mother plants and the rate at which they can be clipped without becoming overstressed, which in turn limits a company’s ability to scale production.

Tissue culture a transformative for how companies grow cannabis

When it comes to large-scale commercial production, tissue culturing has many advantages over conventional cannabis propagation in terms of yield size, disease resistance and superior control over genetics.

With tissue culture propagation, cultivators can take plant tissue cultures as small as just a few cells from the stem of one plant and rapidly produce thousands of genetically identical clones from a variety of strains in a relatively small area. Because these tissue samples can just as easily be collected from production plants, and tissue from the mother plants can be stored cryogenically, there is no need to expend resources on maintaining mother plants.

Once collected, the tissue samples undergo a tightly controlled process that begins with sterilization followed by a series of nutrient and hormone dense gel-based growing solutions to trigger development. Throughout this process, temperature, humidity and light are uniformly controlled to ensure consistent results. This precision control over the growing environment can enhance the genetic potential of each cannabis plant to produce a more potent product. Once large enough and ready for trimming, the plant can easily be multiplied into hundreds of identical plant shoots for starter plants that can be placed into a growing environment for production.

“These genetically uniform production plants can be grown by the thousands without decreasing potency, and are free of pests, viruses and other harmful pathogens,” Mike Jennings, COO and Head of Research and Innovation at Next Green Wave (CSE:NGW,OTCQB:NXGWF) and co-founder of Loud Seeds, a multiple High Times Cannabis Cup winning cannabis breeding and cultivation company, told Investing News Network (INN).

The near certainty of producing pathogen-free plants is one of the biggest benefits to the cannabis industry that tissue culturing has over conventional propagation methods. And this is due in large part to the stringent sterilization which characterize this technique. Tissue culturing has been used by farmers to treat disease in crops, such as the eradication of the crop-killing frogskin virus which has plagued cassava crops in Colombia.

Another huge benefit the tissue culture technique provides for cannabis cultivators is the ability to precisely control the growing environment at each stage allowing growers to enhance the genetic potential of each plant. American biotechnology company Intrexon (NASDAQ:XON) has used tissue culturing technology to successfully bioengineer apples with less polyphenol oxidase, the enzyme that causes browning. The company is now using the same technique to eliminate browning in a variety of produce—in effect decreasing waste as well as the use of preservatives in prepared foods.

For cannabis, “tissue culture technology not only ensures a consistent premium product. New cannabis attributes can be introduced at faster rates with tissue culturing. Strains can be stabilized within two years versus five to seven years if done through conventional cloning methods,” said Jennings.

A third significant benefit tissue culturing has for the growing global cannabis market is genetic preservation and the ability to produce “True to Type” cannabis plants, says Michael Stevens, Founding Partner and CEO of Meristematic Labs. Used by the orchid industry since the 1950s, today tissue culturing is helping botanists preserve endangered species, growing orchid starter plants from tissue cultures in the lab and reintroducing fully grown orchids back to their native habitat.

On the other hand, a well-run cannabis tissue culturing operation can preserve strain genetics, acting as a ‘tissue bank’, which “is the best way to preserve genetics for decades without having to dedicate production space,” said Eric Culberson, director of cultivation for Columbia Care, a US-based medical cannabis healthcare company. This level of surety isn’t the same with seeds or even conventional clones, for which potency and yield will begin to fade over time.

Tissue banking is also a great way to protect future patents. Cultivators may be able to control the rights to their best strains and provide the product consistency demanded by today’s cannabis consumer. “As the cannabis industry shifts its focus on phenotype-based Intellectual Property rights and branding opportunities, there will be a real need for long and short-term phenotype storage,” said Stevens. “For entities claiming legal possession of a particular cannabis phenotype, it will be key to maintain the original living plant sample.”

Tissue culturing is paving the way forward for more targeted medical cannabis treatments and more enjoyable recreational cannabis experiences. Those companies with the foresight to be early adopters of this technology will be well-positioned to take advantage of growing demand for premium cannabis products.

A few of those companies include Next Green Wave, a vertically integrated seed to consumer company which holds four medical and recreational licenses for cultivation, nursery, volatile and non-volatile extraction and distribution in California. The company’s first major cannabis production facility, strategically located between Los Angeles and San Francisco, becomes operational early this year.

Increasing demand for cannabis and cannabis-related products in North America and around the globe is leading companies to not only rethink the way they grow cannabis, but also how they protect the resiliency of their cannabis genetics and their intellectual property rights. Tissue culture propagation may offer the best way forward to producing large yields of healthy, true to type cannabis plants while preserving and securing possession of superior cannabis strains.

This INNspired article is sponsored by Next Green Wave (CSE:NGW, OTCQB:NXGWF). This article was written according to INN editorial standards to educate investors.

2 responses to “Will Tissue Culture Transform How Companies Grow Cannabis?”