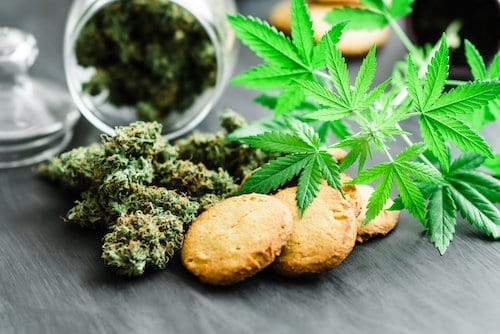 California’s cannabis edibles market is growing within a legal industry that could grow to $3.7 billion in 2018 and reach $5.1 billion to rival the beer market by 2019.

While the cultivation and concentrates markets are getting most of the buzz, it’s the edibles market that represents one of the strongest sectors for growth in the cannabis space. This market sector is driven in large part by new users and those focused on health and wellness who want a smoke-free cannabis experience. There are signs this consumer segment is already flooding into the California cannabis market.

In 2016, Californians consumed close to $180 million in edibles, according to Arcview Market Research, representing 10 percent of total cannabis sales. BDS Analytics reports that after only the second month into full legalization in February 2018, edible products accounted for 18 percent of total California cannabis licensed retail sales. Those figures will likely increase once the recreational market becomes more established.

What happened to the edibles market in Colorado and Washington after the adult-use market became legal may be an indication of what investors can expect in California’s market in the next few years. According to Arcview Research, after Colorado’s legislature made recreational cannabis sales legal in the state, the edibles market went from $17 million to $53 million in the first 2.5 years. In Washington state, cannabis edibles sales soared 121 percent in 2016 following the opening up of its adult-use market.

Several factors make edibles stand out as a true growth sector in the cannabis market, but arguably one of the most important drivers is the expanding health and wellness industry. Grand View Research predicts that the global functional foods segment of this market will reach US$255.10 billion by 2024.

The wellness industry is focused on meeting consumer needs related to sleep, pain relief, mood imbalances and overall well-being. We are beginning to see an overlap between this industry and that of cannabis as consumers become more informed about its many benefits.

“Cannabis and wellness go hand in hand. And it’s evident that a significant part of the market favors edibles over other forms of consumption, like smoking or vaping”, Daniel Hood, co-founder of California edibles company CALIGOLD, told INN. “We find this to be particularly true for new consumers looking for long lasting effects to reduce chronic pain, for example. It’s simply a more comfortable and familiar means of using wellness products.”

“The issue is that many edibles focus first on the medium, like chocolate, and treat the cannabis as a secondary part of the product,” he added. “In practice, the medium should be considered a means to deliver specific cannabinoids that help customers in many different ways. Taste and presentation are certainly important, but I would encourage consumers to look first to the cannabis formulation carried in the chocolate or gummy or mint.”

Medical and recreational cannabis users alike are drawn to edibles products, mostly because of the benefits over the traditional consumption route of inhalation. The CDC reports that the smoking rate for adults is on the decline falling from 20.9 percent in 2005 to 15.5 percent in 2016. Edibles allow new and health-conscious consumers to enjoy the benefits of cannabis without having to light up, providing the ability to medicate at work or at home with children. Edibles are also an excellent entry point into the cannabis market for new users.

“Legalization always creates consumers who are new to cannabis, and their profiles and habits stand apart,” explained BDS Analytics in its report on the leading cannabis trends for 2018. “The newbie skews towards women between the ages of 25 and 44, and half say they are in the market to explore medical applications.”

California is home to a well-established medical marijuana market with around 3,000 retail storefronts and 7,500 delivery services. “Let’s not forget that California has had a legal medical framework since 1996, and that we probably have one of the most mature edible markets in the world,” said Argudo.

Prior to legalization, California’s edibles companies could only sell to the state’s roster of medical marijuana patients. For investors, there are opportunities in the edibles market to capitalize on mature edibles brands as they scale to match the growing market under the new legal framework.

California’s edibles market is already diversifying, with several different types of edibles including everything from candies, mints and baked goods to sports drinks and teas. Low-dose products are especially appealing for new consumers.

The top performers in the US edibles market include cannabis-infused chocolate, gummies and beverages.

CALIGOLD is a well-established producer of high-quality chocolate bars which uses gourmet ingredients including Colombian-sourced cocoa and cannabis strain-specific infusions. The company took first place at HempCon in 2014 for best edible, then again at Edibles List Magazine in 2017 for their THCa chocolate. CALIGOLD publishes data on dosing measurements to provide new users with safe experiences. Earlier this year, High Hampton Holdings (CSE:HC,OTCMKTS:HHPHF,FWB:OHCN) acquired CALIGOLD making it an entrant in this growing space.

Plus Products, for instance, develops and manufactures all natural and precisely dosed cannabis-infused gummies from its 2,000 square-foot production facility in Adelanto. The facility was built with capital raised in 2017 in a funding round led by The Green Organic Fund and Verde Mountain Fund. In a second round of financing led by Toronto-based Serruya Private Equity Partners and New York-based Navy Capital Green Fund, Plus Products raised roughly US$6 million in April 2018 to fund the expansion of its product lines and production capabilities.